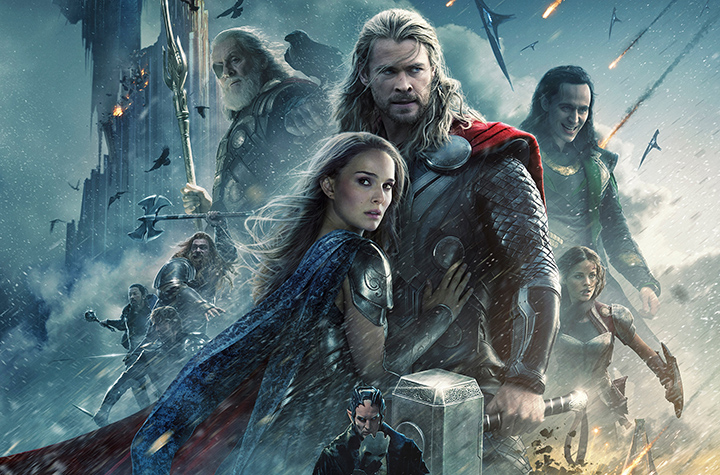 KELLY: Hi everybody! This is Kelly Rocheleau and Sam Tunningley with “Two Takes,” a new column in which we give a tag-team of review of sorts for the latest major big-screen endeavors! Hopefully arguments and disparaging of relatives will ensue!

We’re starting out with a look at “Thor: The Dark World.” Honestly, when I originally saw the film I liked it but thought there were more than a few goofy spots. Now after seeing it a week ago, I can say that even some of the luster it originally had in my mind has been lost.

Don’t get me wrong, there are some strong bits, particularly when our titular Thunder God interacts with any member of his Asgardian family, and it was still better than the first “Thor.” But there were so many absurd, melodramatic moments and silly action scenes (not even in an entertaining comic book kind of way) that kept taking me out of the the film. What say you, Sam? You seemed less than thrilled about this one.

SAM: You are correct on that. In fact, I’m starting to become quite jaded with the entire franchise. “Thor” is not one of the better films in the Marvel canon, but “Thor: The Dark World” might be the company’s slightest effort yet. I admittedly found myself nearly nodding off during some of it, and me thinks a lack of sleep is only partially to blame.

My only real affection for this film lies in its beautiful Asgardian visuals and Tom Hiddleston’s performance as Loki. The humor that gave some pep to the first one has turned into a bunch of in-jokes pandering to the fanboys. Kenneth Branagh, whose style was marked by excessive oblique angles in the first film, seems to have been replaced by a studio automaton; and as you mentioned, a lot of the action just didn’t work for me.

Before accusations fly out that I don’t like superhero or action films, I must point out that “Iron Man 3,” the earlier 2013 Marvel effort is maybe the most pleasant surprise I’ve had at the movies all year. I really dug the reflexive and self-deprecating elements of that film (for those who haven’t seen it, the hero is plagued by anxiety attacks). By cutting down on the hero sentiment, they gave the character a much-needed jolt of life after that dreadful second film. “Iron Man 3” was incredibly entertaining and this was, well, not. Superhero movies aren’t something I typically walk into expecting a great work of art, but a little fun seems too much to ask at this point.

KELLY: You know a film just isn’t great when a reviewer spends more time talking about how much better a certain film is than the movie in question. Anyway, I agree on Hiddleston; a flash of his eyes puts more energy on screen than damn near anything else in the film, but I actually thought the visuals seemed routine (in an early scene, Thor and company fight creatures that appear to be Sand People from “Star Wars”).

While some jokes fall flat (a few scenes with the obligatory “sassy best friend” character, played by Kat Dennings, go on far too long), I enjoyed some gags at the climax that broke up the action. I’m actually curious as to what “fanboy” jokes you’re referring to? Not that many jokes or moments seemed too pandering. Perhaps it’s just me.

SAM: Hey, if I can convince readers to check out “Iron Man 3” over this film, I will be doing them a favor. Using “fanboy” may have been the wrong terminology, but it’s fitting for just how out of the loop I felt every time the theater burst into laughter. For instance, when the news report came on of Dr. Erik Selvig (Stellan Skarsgård) naked, one woman in my theater could not stop herself and erupted into a maniacal fit of joy. Of course, I would never suggest that someone isn’t allowed to find something funny, but I found myself consistently unimpressed with this kind of formulaic humor. These are easy jokes made to draw a quick laugh, whereas the humor in the first one felt more labored over. The sassy best friend thing you mentioned, was immensely grating. It wasn’t funny, nor did it add anything of interest to the story.

I disagree quite strongly about the visuals being routine, and I think the design of Askgard remains the strongest element of these films. It’s all caked in a phantasmagorical glow that I find ridiculously appealing. Sure, they rip off “Star Wars,” but could you honestly name a blockbuster that doesn’t?

KELLY: Yeah, I’ll give you that. But when it starts reminding me of the PREQUELS…anyway, I’ll admit that the design of the palace of Asgard was all sorts of glowing-gold good, but scenes of the various worlds seemed like they were cut-and-pasted from numerous other fantasy movies. Maybe I’m just being cynical.

But a lot of jokes didn’t quite work for me, like the Skarsgård scenes, although I did enjoy the line “I had a god in my brain. I don’t recommend it.” On a positive note, Chris Hemsworth plays Thor with a mix a dashing nobility and tempered arrogance that works. And really, Tom Hiddleston. What more can be said about that man that thousands of Tumblr posts haven’t already?

SAM: Seriously. I am also a fan of Hemsworth’s portrayal of Thor, but he just wasn’t given a whole lot to work with this go-around. So to wrap it all up, I think the point we’re both trying to get at here is this is one of the lesser efforts from Marvel, performances notwithstanding. I’d see it again, considering I was in a sort of soporific state through most of the run-time. Maybe I’m not entirely qualified to say I didn’t enjoy, but I didn’t enjoy it.