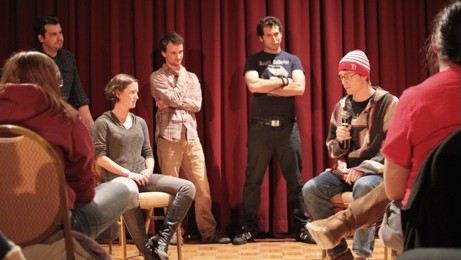 The four person team of Fran Gillespie, John Frusciante, Ben Rameaka and Johnny McNulty brought their A-game for the packed Bovee University Center. Extra chairs were wheeled out, though some people still had to stand to watch the show.

It started with Trap Door Improv, CMU’s improv comedy RSO, playing a few games — but it wasn’t long until they brought the real show on stage.

The UCB improv group started by interviewing an audience member about anything and everything. After the interview was over they began acting out the scenes mentioned in the interview. A police officer sucking on a lollipop giving someone an MIP (minor in possession) was a highlight.

Other noteworthy sketches were Mary and Joseph debating about whether or not to have sex in front of the baby Jesus, a sexy professor running a biology class and a promotional video inviting high school students to “smoke pot and building dancing robots for class.”

Despite their goofball comedy, it was still a very smart show. Gillespie made an obscure reference to Shakespeare saying, “Forsooth, I know not why I am so sad.” There was a lot of subtlety to their offbeat comedy.

The best thing the troupe did was have fun themselves. It was easy to see they were really enjoying themselves on stage.

“You go up, you don’t know what you’re going to do, but you just have fun,” McNulty said. “You’re literally just playing with friends.”

The troupe says that they’re the exact same person onstage and offstage. Who you see pretending to be a blind airline pilot is the same person you’d grab a beer with.

“Making people laugh for a living is the best,” Rameaka said. “You couldn’t ask for a better job.”
Before making their final stop for their tour at CMU, the UCB improv group performed at Eastern Michigan University and Purdue. With their tour over, the troupe has gone back to New York to continue performing at the UCB Theatre where they hone their craft.

“It’s funny because serious actors will do improv because they can inspire tears, but the hardest thing to inspire is a laugh.” Frusciante said. “And we’re trained to get audiences to laugh. You should see us try to get an audience to cry. We can make an audience sob.”