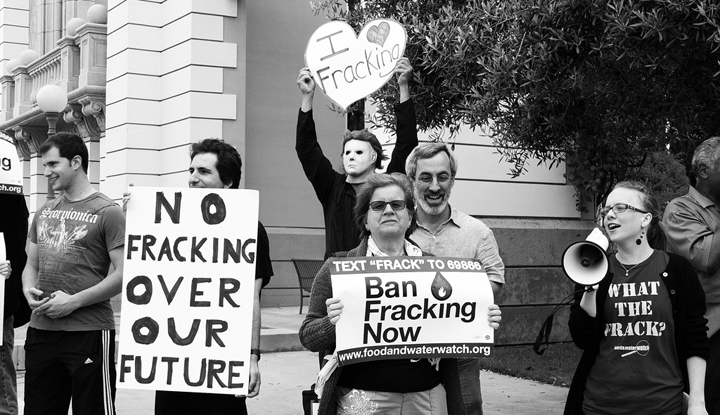 Over the last year four states have confirmed ground water contamination has occurred due to the process of horizontal hydraulic fracturing, or “fracking” as it is commonly called.

For starters, fracking is the more recent technology of extracting natural gas for energy usage. Vertical fracking has been used in Michigan for approximately 40 years, and there has not been as many concerns raised with this type. Horizontal fracking, though, has only been used approximately for the past 15 years.

Fracking has been allowed in the United States without widespread scientific testing, or an EPA study on the risks of horizontal fracking. While fracking is touted as being the “green” and “cleaner” option of energy sources, it has simultaneously contaminated millions of gallons of freshwater, industrialized landscapes, and has put life and livelihoods at risk since its initial operation.

Let me break this down. Horizontal fracking is a ghastly procedure of natural gas extraction which entails drilling a pipe five to 10,000 feet into the ground to a layer of shale. Once it reaches the shale layer, the pipe is forced to bend, and then continue horizontally into the shale layer. The pipe is then blasted with a mixture of sand, rocks, and chemicals at extremely high pressures. This blast then fractures the shale rock, and uplifts the natural gas.

In Michigan, upwards of 20 million gallons of freshwater are used to frack a single well. The water is then permanently contaminated and can no longer be restored to the natural water cycle. These 596-plus chemicals are toxic and known carcinogens including benzene, formaldehyde, lead and more. We don’t know exactly what chemicals are being used, because they are labeled as a trade secret (like Coca-Cola’s recipe).

Never more than six miles from a fresh body of water, Michiganders culturally identify with this essential resource. If we allow the oil and gas industry to continue fracking in Michigan, we are putting the Great Lakes at risk for ourselves as well as future generations.

Not only does fracking pose unnecessary risks to the water we rely on, land is ruined as well.  The waste byproduct is a primary concern with fracking. The waste water flow back is also put in underground injection wells, above ground retention ponds, and even carelessly used to be spread as brine on roads. Because of this high risk fracking operations, farms have suffered from chemical contaminated which resulted in housing prices to skyrocket, making it nearly impossible for individuals to sell their homes.

Also, the fracking process of one well uses over 1,000 trucks to transport the resources needed. This increase air pollution and puts stresses on local road infrastructure.

You may be thinking to yourself, “How are energy corporations allowed to get away with all of this? Don’t we have regulations?”

Well, we did. But in 2005 under the Bush Cheney administration, Vice President Dick Cheney, also Halliburton CEO, passed the “Halliburton Loophole,” which exempted the oil and gas industry from important environmental regulations including key provisions in the Clean Water Act, Safe Drinking Water Act, and parts of the Clean Air Act.

In some states, if a person becomes ill due to groundwater contamination from fracking, the oil and gas corporation still does not have to tell you what chemicals are in your body. I have met people from Pennsylvania, Texas, Ohio, West Virginia and more places whose family members have grown ill, livestock have passed away, and lives have been turned upside down from the deathly grip of fracking.

The process marginalizes Michigan homeowners and farmers. Additionally, across the nation, First Nation communities have displaced as a result of exploitative practices of oil and gas exploitation on Native land.

While the issue of fracking may feel like a lost cause, there is some hope. Many environmental activist groups are taking on new strategies to target this cataclysmic industry. There are groups who are suing the state, working towards a ban on fracking, trying to pass ordinances to hinder fracking in local municipalities, and much more. Some groups nationwide have taken it upon themselves to physically put themselves between their land, and the oil and gas industries.

While the fight against fracking in Michigan is a large undertaking, the first steps of advice I have is to agitate, educate, and organize!