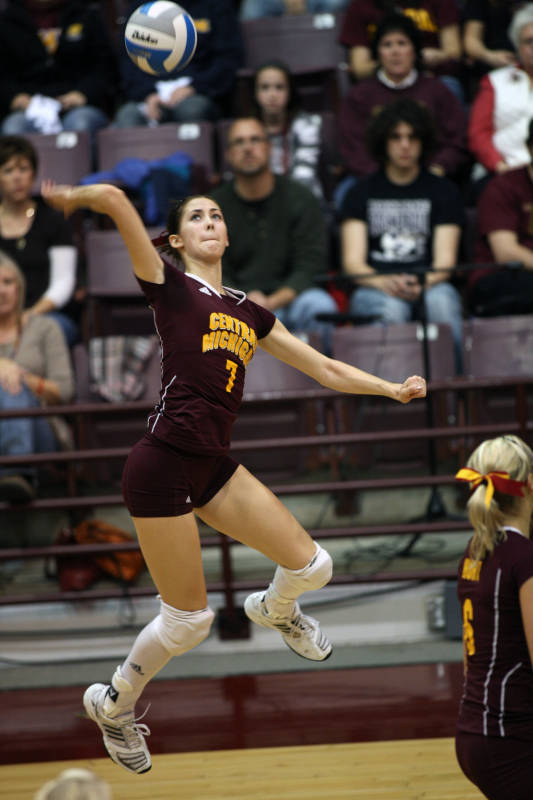 Katie Schuette is in an interesting predicament on the Central Michigan volleyball team.

A sophomore from Grand Blanc, Schuette still has a bit of a learning curve, but is in a spot where she is expected to make contributions to the team.

“This is a year to contribute,” Schuette said. “Coach (Erik) Olson expects a lot out of us. This year I need to keep doing what I’m doing.”

But Schuette’s position of middle blocker was not necessarily by design.

“Her future is as an outside hitter, this season she’s playing in the middle,” said head coach Erik Olson. “She’s getting a lot of great experience.”

And that experience has turned into results. The sophomore has been able to net season best kills and digs against Mid-American Conference opponents Northern Illinois with 13 kills and Toledo and Western Michigan with 11 digs respectively.

Her strong play could not have come at a better time. The Chippewas were the preseason MAC West division favorites but they have had a difficult time notching victories against conference opponents.

“We’re focusing on finishing games strong on both intensity and focus,” Schuette said. “While we’re looking to get our first win, I just don’t want to win; I want to bury a team at Finch Fieldhouse.”

That drive and determination is just what Coach Olson is looking for.

“We’ve wanted to see her mentally really getting tougher and turning any timidness into confidence,” Olson said.

If her recent play and attitude are any example of what’s to come, Schuette might help lead her class and team to great success not just down the line this season but into the future.

The middle blocker is part of a strong sophomore class on the roster that features six players.

“It’s a talented class. We’ve been working with them on understanding the game better,” coach Olson said. “This is the most physical class I’ve had; we’re trying to get the mental part down. Once that’s set, there’s no telling how good this class can be.”

If Central wants to pick up wins in a hurry and reclaim the MAC West, they’ll need Katie Schuette to play a large role.