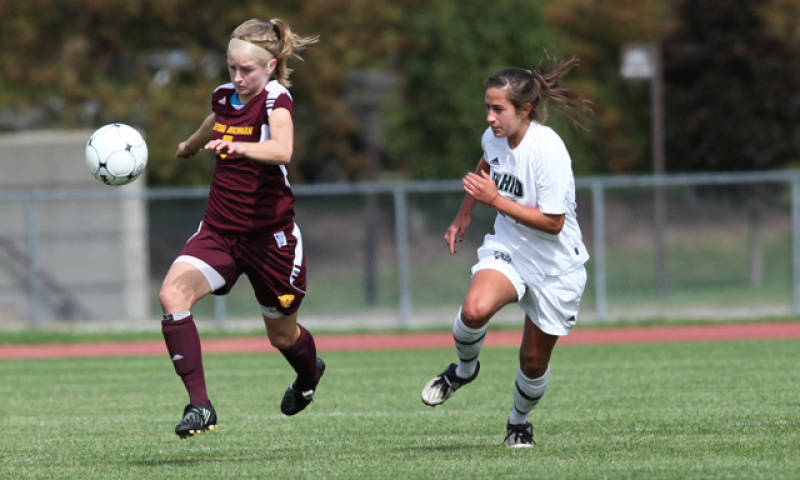 If defense wins championships, Central Michigan’s soccer team has the foundation for continued conference acclaim in the form of Liesel Toth.

Toth, a junior defender from Victor, N.Y., is part of a Central defense that has only allowed three goals through eight Mid-American Conference games, and yet still finds her way into contributing on offense, where she has scored four game winning goals.

“It’s been exciting to play a larger role in the offense this year,” Toth said. “It’s helped boost confidence on the field. On this team, all we really want to do is have our individual contributions help the team as a whole.”

While Toth’s play on offense has been greatly appreciated by her teammates and coaching staff, she’s played a large role in creating a defense that has become difficult to deal with for MAC opponents.

“No team wants to get scored on,” Toth said. “Our unit has to cover the whole backline. Our motto collectively has always been to do whatever it takes.”

Toth has been doing whatever it takes, as she leads the entire team in minutes played on the season, a key benefit to top notch conditioning and something she doesn’t take for granted.

“We always have a fitness test prior to the season. If you don’t pass that, you cannot play,” Toth said. “Our goal is to always outrun our opponents, not just in conference, but the other teams as well. We want to be the most fit team in the MAC.”

On the field, Toth could be classified as versatile and headstrong. Ironically, off the field there isn’t much difference as she boasts a 3.84 grade point average.

“I learned freshmen year that time management is huge,” Toth said. “I actually find that keeping up with schoolwork is easier during the season, because you’re used to a certain routine that becomes second nature. During the off-season, when you’ve got more time on your hands it can actually be more difficult.”

Last year as just a sophomore, Toth and the rest of her teammates were able to parlay a successful conference campaign onto the national stage, defeating 24th ranked Purdue in the NCAA tournament. As for this year, Central is undefeated in conference play and was the preseason favorite to win the MAC.

“Last season gave our program a face and helped put us on the map,” Toth said. “We proved we can play big teams with the players we have. For us, it was and still is all about staying focused and consistent.”

While the win against Purdue last season may have helped give Central soccer the recognition it deserved, Liesel Toth has certainly played her way into being a force to be with reckoned with.