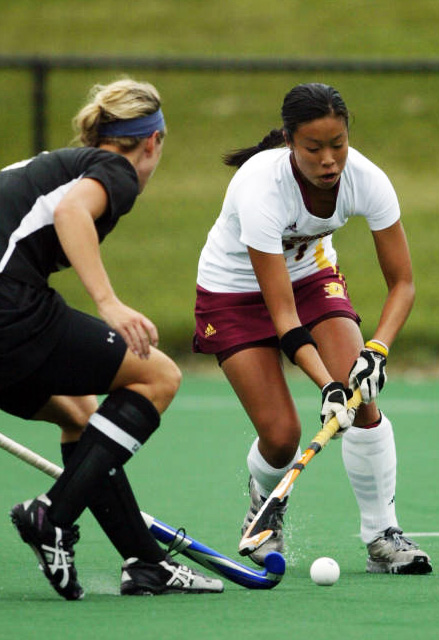 The marketing major and midfielder for the Central field hockey team, motors her way around the playing field, just as she’s expected to.

“There’s a certain level of commitment needed out there,” Lee said. “As a midfielder, once you learn the basic fundamentals of both offense and defense you can play any position out on the field and really just contribute.”

Through eight games in the 2010 season, Lee is third on the team in total minutes played with 529, only trailing Brooke and Kim Sihota. Those hard earned minutes are certainly a reward for her play and work ethic.

“The biggest aspect is coming back on defense and making quick plays to help out the forwards,” assistant coach Kim Kinsella said.”You simply cannot be good at that position without being in killer shape.”

Like most members of the Central field hockey team, Paulina Lee doesn’t call Michigan her home state. She is one of four players on the roster from the state of New York.

Aside from the numerous recruiting advantages, having a teammate with a similar background helps the bonding process.

“Once you find a player from an area that really works well for your program, you certainly want to strike up that tree and pluck them out,” Kinsella said. “Recruits from that area will have heard of your program and certainly look your way.

“Before that player’s first day on the team, they’ll already have someone they can strike up conversation with, which always helps the transition.”

That camaraderie with fellow New Yorkers has been an enjoyable result of playing field hockey on the collegiate level for Lee.

“I’ve known Emmy (sophomore forward Emily Girasole) and Erica (redshirt freshmen forward Erica Garwood) for a few years, since we all played for the same club team,” Lee said. “It’s always nice to have inside jokes and conversations about home with teammates.”

The Mid-American Conference tournament will be held at Central this year. No matter what state or country each player is from, they’re aware that’s the end goal.

“Playing at home is always fun because the crowd always keeps you focused,” Lee said. “We know what’s at stake and we’re proud the tournament is here this year.”

Whether it’s Lee’s native New York’s hustle or her new home state’s work ethic, home-field advantage will be the key to a Mid-American Conference championship.