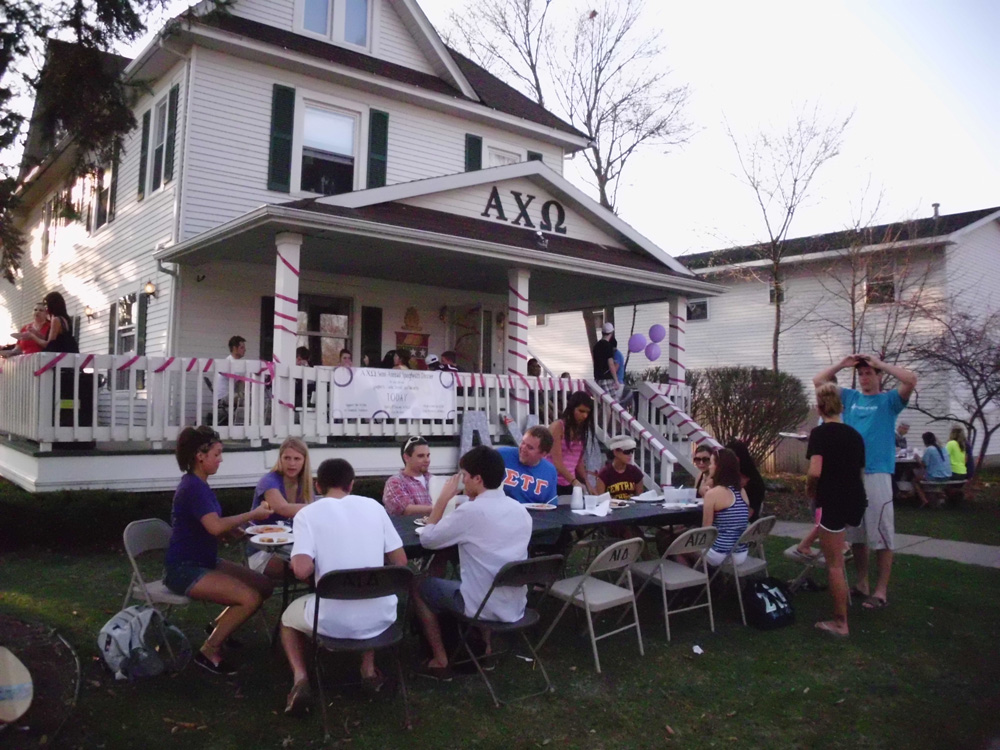 The event has been hosted annually since the 1980s, and Grand Rapids freshman and Philanthropy chair Anna Flood said the event was pretty easy to plan. The hard part, Flood said, is buying enough supplies and contacting people to help.

The sorority’s philanthropy helps to raise awareness for domestic violence and its victims. A percent of more than $2,100 raised will go toward AXO’s national organization, while the other percentage will come back to Isabella County.

Scottville senior and AXO sister Katrina DuPree feels that the philanthropy has a very powerful message.

“When we raise money for the local women’s aid shelter it really hits home,” DuPree said.  “One in four women will be a victim of domestic violence, and that’s a lot of women that I may know.”

Rochester freshman Max Nielsen attended the event for his second time and said that the food was pretty good.

“I went last semester too,” Nielsen said. “All I remember was the line was a lot larger, but I went towards the end [of the event] last semester.”

During previous spaghetti dinners, the event would just be one evening each semester. It was not until recently that they moved the outing to two nights, saying that the move was successful because availability opened up people’s schedules and allowed for them to attend.

Each sister of AXO was required to sell 10 tickets at $4 a piece before the event, but tickets could be purchased at the door for $5. A 50/50 raffle was held and people were able to purchase single tickets for $1 or $10 for an arm’s length. Half of the money from the raffle went to the AXO philanthropy and the other half went to the winner, with Michael Greene receiving $36.

While going through recruitment during her first semester on campus, Flood hasn’t regretted her decision to join AXO.

“I just felt like this fit me the best,” Flood said. “I couldn’t have picked a better sorority for me to join.”

DuPree has been involved with AXO since fall of 2008 being an active sister for eight semesters.

“I was looking for that home away from home feeling and lucky for me I found it in Alpha Chi,” DuPree said. “I can honestly say it was the best decision I have made at Central.”

This semester the AXO’s look forward to their chapter retreat and Greek Week — a week-long competition pairing up sororities and fraternities to compete against each other to raise money for various philanthropies.

Next fall, the sisters are planning an event called “Rename the Wife-beater,” which is a fashion show where registered student organizations will pay to enter and decorate a sleeveless shirt.