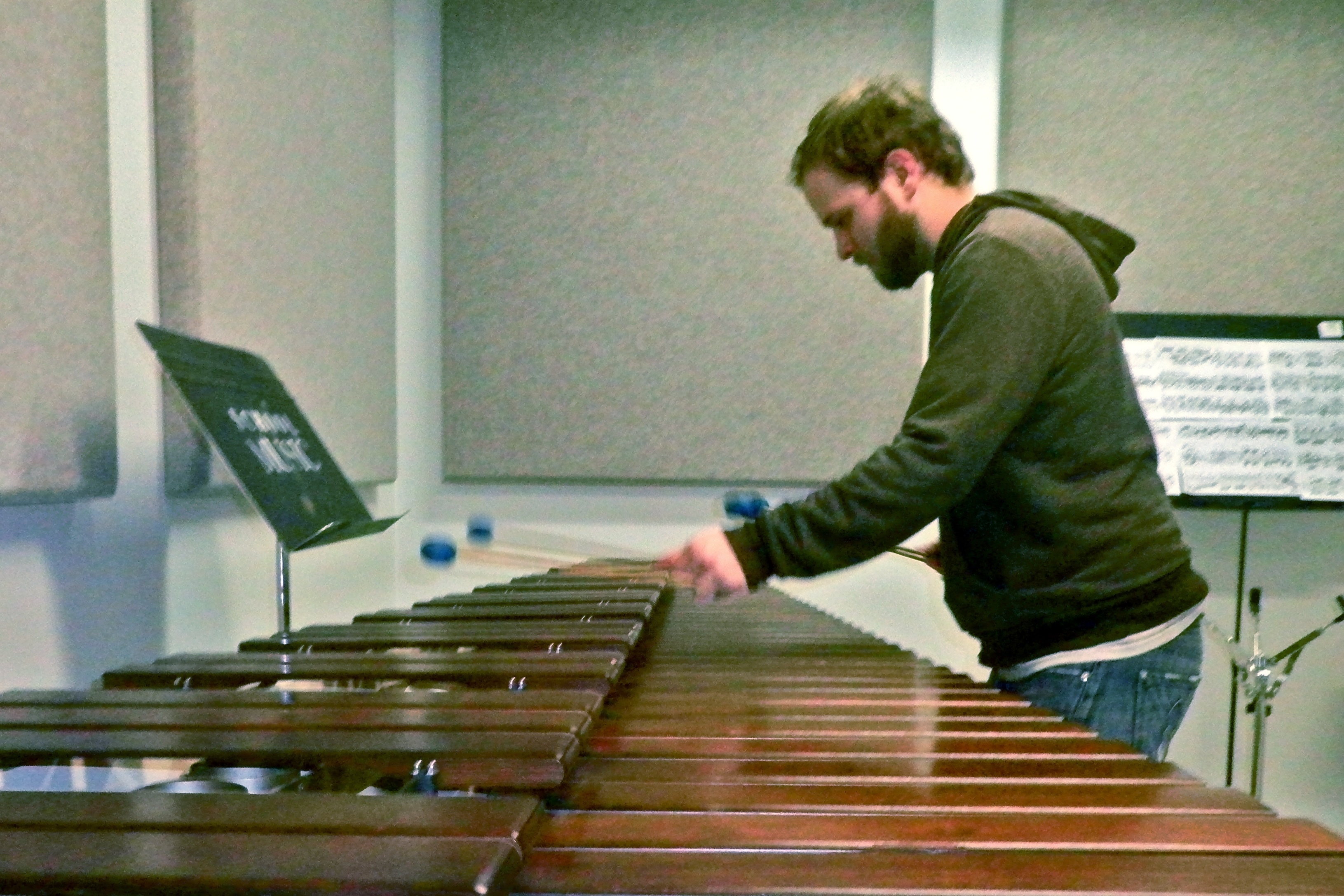 His hard work was finally about to pay off.

He waved and bowed to the audience warmly before entering a deep state of concentration. With a lift of his hands, the percussionist took his final preparatory breath – and then, music.

“I have been practicing hours everyday for weeks to get ready”, Cook told GCM before performing. “This recital will be an important part of my portfolio.”

Cook, a talented symphony member and music major of percussion concentration, shared the night’s spotlight only with his accompanying associates: Tyler Bragg, Kevin Keith, Jon Brown, Nathan Bushey and Kyle Cherwinski. There was no conductor or coordinator.

The first piece, “Three Shells” by Christopher Deane, kicked off the show with Cook playing solo marimba. The ferocious technique needed to accurately (and quickly) play this level of notation, is merely the next best thing to having four arms.

The strategic acoustics of the hall were undeniable once listeners heard Josh’s first piece. The stage, once quieted by the poised musician, became a flurry of notes – it was hard to believe only one student was producing them all.

“People hear that I’m a percussionist and immediately ask, ‘So you play the drums?’” Cook jokes. “I have to let them down easy. I play the triangle, the vibes, and the rest of the traditionally forgotten percussion family”.

Friday’s second piece, “Imagine There Was Nothing” by Fredrik Anderson, was a multi-percussion work accompanied by Bragg and Keith. The piece reached 14 minutes in length, and showcased Cook playing the vibes, and the glockenspiel, much of the time with two instrument sticks in each hand.

The rest of the recital went exceptionally as follows:

Cook, known as “Boogie” by his friends and family, ended the performance with a thank you to his parents, the studio, Dr. Spencer of Central Michigan University’s Music department, and Lance Vashinski – his middle school band teacher.

Friday’s performance was a solo effort. However, Cook’s endless practice schedule has offered the university’s Wind Symphony professionalism, preparedness, and ultimately – one hell of a vibes player.

“The group has been sounding awesome”, Cook said. “This month’s shows should be some of our best.”

Josh Cook and the university’s Wind Symphony will be performing Thursday, April 21, at 8pm. The following week will showcase the Symphonic Wind Ensemble— Tuesday, April 26.

If you haven’t had the pleasure of enjoying these two groups on campus, you are missing out. This is the perfect source of free entertainment. (Great cheap date).