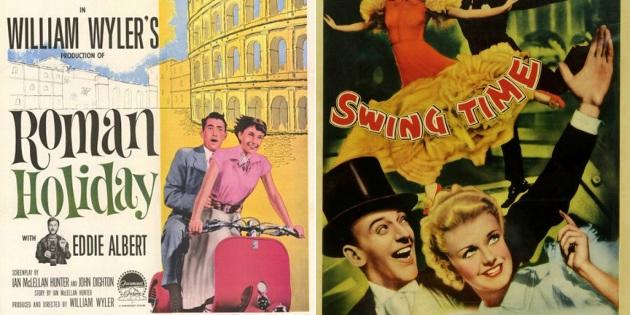 Valentine’s Day is just a few days away and whether you are single or in a relationship, everyone secretly watches cheesy love-story movies.

You could be stereotypical and modern and watch “The Vow,” “The Notebook” or “Titanic.” But if you are looking to watch something different, go vintage. Two favorite vintage movies are 1936’s “Swing Time” and 1953’s “Roman Holiday.”

Many people have the preconceived notion that somehow older movies are boring. This idea is false and causes people to be culturally illiterate. Today’s current actors and actresses would be unknowns if movies like “Swing Time” and “Roman Holiday” didn’t pave the way.

“Swing Time” stars Hollywood legends Fred Astaire and Ginger Rogers. For those who are unfamiliar with film history, throughout the ‘30s and ‘40s, Astaire and Rogers made 10 movies together and their on-screen chemistry is undeniable. Their movies helped shape today’s contemporary movie-musicals.

Although these movies were made before World War II, the plot line mirrors countless modern films. Astaire plays Lucky Garret who is manipulated by his friends to miss his wedding. Garret’s finance’s father will only allow them to get married if he makes $250,000, enough money to start a comfortable life with his daughter. Garret travels to New York City to make his fortune but falls in love with another woman named Penny Carroll (Rogers). Garret’s feelings about Penny conflict with his previous promise of marriage.

“Swing Time” has a legacy destined for longevity. The film has won an Oscar for Best Original Song and in 2004 the film was put in the National Film Registry to be preserved for future generations.

“Roman Holiday” features Audrey Hepburn and Gregory Peck. The stars can be recognized by viewers for famous roles including Peck’s work as Atticus Finch in “How to Kill a Mockingbird” and Hepburn’s role as Holly Golightly in “Breakfast at Tiffany’s.” However, it was with “Roman Holiday” that Hepburn first caught Hollywood attention with a major film.

Hepburn plays Princess Ann, a tourist to Rome who is bored and frustrated with the limitations her title brings to her life. She runs away from her palace and ends up with an American newsman, Joe Bradley (Peck). Bradley yearns to return to New York City and decides to take the princess out for a day in order to sell the story to his editor and have the financial means to return to America. Ann does not tell Bradley her real identity and is unaware he knows.

Of course, throughout the course of the day, the two fall in love with each other and Bradley is forced to choose between his love and respect for Ann or his dream to return to America.

“Roman Holiday” is also sure to remain in American culture for decades to come. It won three academy awards including Best Actress in a Leading Role, Best Costume Design and Best Writing. In 1999, “Roman Holiday” was placed in the National Film Registry.

Although both films are outstanding, there can only be one winner. The winner has to be “Roman Holiday.” Despite the fact that Astaire and Rogers deliver incredible dance numbers in “Swing Time,” their acting and the storyline is a bit ridiculous at points. Peck and Hepburn both executed superb acting and the storyline takes audiences on an emotional journey.

Despite the indisputable fact that older movies are important to watch, they can be expensive to buy. Movies such as “Swing Time” were made in an era where films were quickly made and quickly disposed. A word of advice to a fellow vintage film junkies, an excellent option is Amazon Prime. For $79 a year (averaging to about $6.58 a month), movies like “Swing Time” and “Roman Holiday” are just a click away.