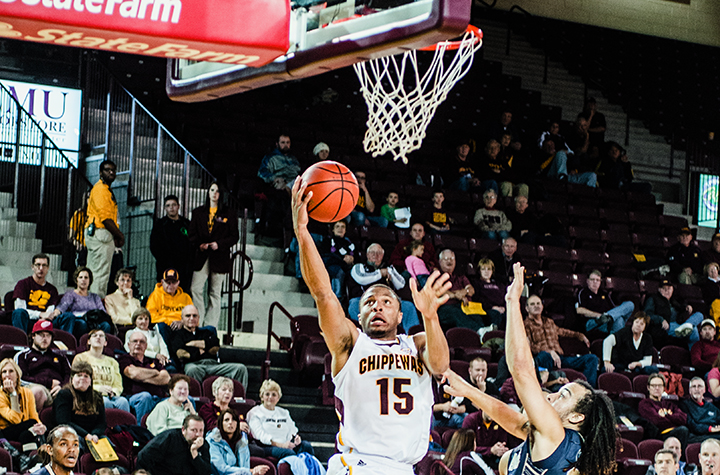 Central Michigan (2-3) gave Montana State (1-3) its first win of the season on the second night of the three-day tournament, losing 59-54 on Friday, Nov. 22 at McGuirk Arena.

Sophomore guard Chris Fowler ended the game with nine points and two rebounds on 4 of 6 shooting.

“As a captain and as a leader emotionally I have to be able to step up,” Fowler said. “I put the lack of energy on myself because it wasn’t the team lacking energy, that’s a direct reflection of its leader.”

“Those 29 three-pointers weren’t bad shots, but you could cut some of those out and it’s a completely different ball game,” Davis said. “You make some more plays when you can get the to the basket and in return the free-throw line and you get your pressure up then the entire flow of the game changes.”

When it comes to being a leader on the court, Fowler said he sometimes struggles with being a captain during the game. Fowler said his job description is to be the leader of the team and he has to bring that energy every game.

“I feel like I let us down in terms of the emotional energy,” Fowler said. “So that can’t happen regardless of what type of game I’m having. I have to be there every night and that’s my job for this team.”

Despite struggling from a emotional standpoint during the game, Fowler said compared to his performance last season, he feels pretty good and still feels confident.

“I’m able to find people for open shots and get to the free throw line a little better,” Fowler said. “I’m playing a little bit better defense. I feel my confidence is pretty high this year.”

Davis said it’s nice having Fowler as a leader because of his strong work ethic and his demeanor after a loss. Fowler doesn’t take losing lightly, in part because of the leadership role he’s been given.

“Part of the reason that Chris is a leader for us is because he puts the team first,” Davis said. “He’s a true coach on the court, so when we lose, he’s going to take the blame. He’s the first person to not point the finger, so I’m careful to not point it at him because if he plays poorly, no one feels worse than he does.”

Fowler said Montana State’s defense was something they had not seen up to this point. He called it a gimmicky type of defense that you can only become comfortable with after you play against it.

“We saw it and we kind of let it frustrate us early and when it frustrated us, it showed in the way we played,” Fowler said. “We stopped running. It affected us defensively and the game tempo slowed down, and we weren’t able to get it back to where we want to play at.”

Central Michigan struggled offensively and lacked explosiveness. Unlike the game against Austin Peay, the Chippewas weren’t able to get to the free throw line as often as they’d like.

Fowler said on the bright side this game will help Central prepare for Mid-American Conference play.

“One of the benefits is being able to see how our bodies will recover for the next game and see how many games we can win in a row,” Fowler said.

Regarding what the team needs to do to become better and more competitive, Fowler said the team has to play hard for a solid 40 minutes each game.

“We have to give 100 percent every time we step on the court and if we do that then we’ll have a good chance,” Fowler said.

Central Michigan will play another home game against CSU-Northridge tonight at 7:30 p.m. at McGuirk Arena.