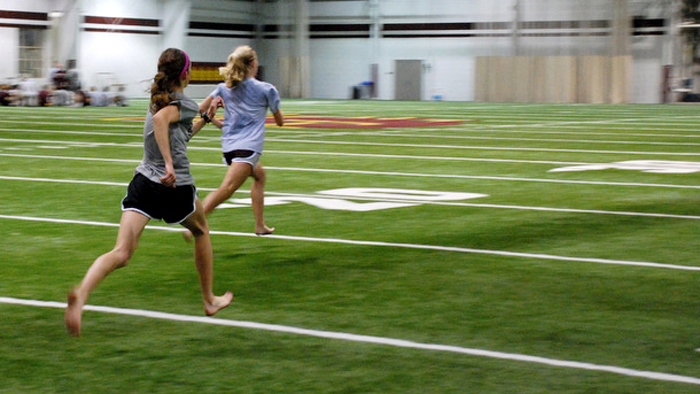 Breanne Lesnar’s future Central Michigan cross-country teammates assured her during her recruitment process that she would be able to balance her academic course load with the rigors of a collegiate cross-country season.

After all, just months earlier, three of those same women were named to the Academic All-Mid-American Conference cross-country team, tied for the most of any MAC program.

“I figured if they can do it, I can do it too,” the lean, brown-haired freshman from Freeland said.

And so far, she has. Lesnar is now in the midst of both the fall semester and the cross-country season, balancing hill workouts with homework, six kilometer races with study sessions, and long morning runs with late evening socializing.

She has been doing well in her classes and running near the front of the pack, most recently finishing ninth overall in her division at the five kilometer Notre Dame Invitational and third amongst her team in a career-best 18 minutes and six seconds.

But it hasn’t been quite as easy as her teammates initially let on for one main reason.

Lesnar is the lone intercollegiate athlete at CMU who is also a recipient of the Centralis Scholarship, the university’s most prestigious academic scholarship. And with that prestige comes responsibilities and academic pressures the average student likely won’t face, which are compounded by the pressures of competing at a high level for a Division 1-A intercollegiate athletics team.

All of this on top of being a first-year college student away from home for the first time.

“All I can say about having both privileges is that I’m blessed,” she said. “It may pose challenges along the way, but amidst any difficulties I remind myself that I’ve been given a once-in-a-lifetime opportunity, in my opinion. I love interacting with both the top-notch athletes and top-notch scholars CMU has to offer.”

Consider the uniqueness of Lesnar’s situation. Studies done by the NCAA show a very small percentage of high school athletes make the jump to the next level, on the order of between three and 10 percent, depending on the sport.

Lesnar’s meteoric ascent to the next stage was even less likely. Though she ran around her neighborhood quite regularly dating back to her middle school days, Lesnar had always been averse to the idea of running competitively. It wasn’t until the middle of the cross-country season during her senior year that the Freeland cross-country coach, who also happened to live in her neighborhood, was able to convince her to join a normally strong team in the midst of a down year with injuries.

She only competed in a handful of cross-country meets, but in a very short time she took the girl’s cross-country world by storm, eventually finishing fourth at the 2010 Division 3 cross country state finals in a school-record time—all while playing volleyball as the team captain at the same time.

Furthermore, only 750 students out of the total 21,633 undergraduates at Central Michigan University are Honors students, and fewer than 200 received the Centralis Scholarship—43 or so each year, give or take a few depending upon the year.

Put it all together and what do you get? Five fall semester Honors athletes in total, including one Centralis athlete, Lesnar, who has a very hectic schedule.

“If we could only add a few hours to the day,” she said.  “Just trying to find enough hours in the day is a challenge.”

Running around all day

Her day begins as early as 6 a.m., well before the first light of the day has even contemplated breaking. After a quick breakfast, she pushes through the double doors of Larzelere Hall at the very far northwest corner of campus into the relative darkness of the new day. She unchains her bike from the racks along the walls of the building, hops on and rides all the way to the Intercollegiate Athletic Complex, or IAC, located on Central’s south side.

Practice begins at seven, or eight some days, but that is not when Lesnar and the other runners are expected to show up. A half hour before practice starts, she is already in the IAC stretching, warming up and meeting with the trainer to make sure her body is in optimal running condition.

After all of this, seven in the morning finally rolls around and the team starts practice, during which time she relishes in the team’s familial atmosphere.

“Even though running is an individual sport, we depend so much on one another,” she said. “That’s one of the coolest things that I’ve experienced running at college.

“Running in high school was kind of an on-your-own kind of thing. But when we’re running together, the girls will say ‘Come on, let’s get through this together’ or ‘let’s tackle the hill’ or ‘fire up Chips!’”

Miles of running gives way to core work and lifting, which segues into cooling down, seeing the trainer and icing her legs. It is now between 10:30 and 11:30 in the morning.

Of all the mileage she has put on her running shoes this morning, not a single step has been through the doorway of a classroom.

That’s what her afternoon is for.

“Classes start at 12 or 12:30, so somewhere in between there I grab a bite to eat, usually in like ten minutes,” she said.

Though she loves her experience on the cross-country team, her top priority remains on academics.

“It (academics) was the thing that kept me from wanting to run in college, because I wanted to focus on my academics,” the former salutatorian of her graduating class said. “That was my priority.”

Among the 15 hours coursework facing her throughout the week are two Centralis cohort classes with her fellow scholarship recipients, which have proven meaningful and valuable to Lesnar, and allowed her to transfer some of the characteristics she has developed from running and athletics in general.

“Especially now working on our group philanthropy projects, we work a lot together as a group,” she said, referring to a project for which she needs to work in a small group to help organize and execute an aspect of a silent auction to benefit charity.

“I think if we didn’t communicate or work together as a group it would be impossible to accomplish anything. You have to be on the same page, you have to make sure everyone is putting in the effort to help the team.”

She said she enjoys the project and the classes, but they have also presented additional challenges in terms of time management.

“I have found that there have been a lot of outside of class requirements that I didn’t expect initially,” she said.

In addition to the philanthropy project, which almost exclusively entails out-of-class work, Lesnar has multiple in-depth, out-of-class projects assigned in each Honors class that involve partaking in various activities and experiences that push her outside of her comfort zone.

Even the relatively short breaks in her afternoon schedule offer no reprieve.

“And then there’s study table,” she said, with just a hint of sarcasm in her chuckle. Every student athlete is required to complete a certain number of supervised study hours. “Don’t want to forget that.

Eight hours per week. That’s what I mostly do in my downtime in between classes. I’m like ‘Oh, I can get 45 minutes now, so I bike over (to the IAC).’”

After classes wrap up in the late afternoon, Lesnar finally has a chance to catch a breather, which she often passes on in favor of participating in extra-curricular activities and homework.

She has become involved with the Honors Program Philanthropic Society as a committee chairperson and His House, a church on the south side of campus. As a chairperson, she is co-organizing a service project around assisting local nursing homes and hospices.

This is all in addition to “being a college student, too,” she said. Socializing with roommates and friends in the hall is an important part of the college experience for her too, though it is often deferred to the late afternoons, evenings and weekends.

And don’t forget about sleep, which Lesnar said she tended to do in the first few weeks to try to keep up with the frenetic pace of her life these days.

“I was up late nearly every night trying to fit as much as I could into each day, or trying to get ahead for the next,” she said. “However, I’m slowly learning the great importance of a good night’s rest in order to repair and recover.”

Now she goes to bed at an earlier time—midnight. Just six hours before she does it all over again.

Keeping up the pace

So how exactly does she juggle the out-of-class commitments, scheduled class sessions, athletic obligations, extra-curricular activities and the life of a college student?

“I’m a big scheduler,” she said. “I just want to succeed in both aspects, so I try my hardest to manage my time and plan ahead. I’ve found that I’ve had to limit myself with what else I get involved in so I don’t bite off more than I can chew.”

But she has also found that not even the most meticulous scheduling can avoid the inevitable overlapping of obligations.

“It seems like whenever there’s something for Honors going on, its during a practice time or I’m gone for a meet,” she said. “I couldn’t attend the welcome event for Centralis, so I was already behind there and I had to catch up.”

Even through all of the stress and the craziness that is her daily schedule, Lesnar wants to keep it up for the rest of her college career.

“I think it is a very enriching experience and a great opportunity to be on an intercollegiate team,” she said. “I think (the Honors Program) is really going to give me the tools I need to continue my hard work ethic and help me figure out who I am as a person.”

Despite her limited college experience, she seems to understand exactly how unique of a position she is in, and she wants to make the most of it.

“There’s a reason that I have this opportunity,” she said. “I’ve been given this talent for a reason, so why not give it a shot. What do I have to lose?”