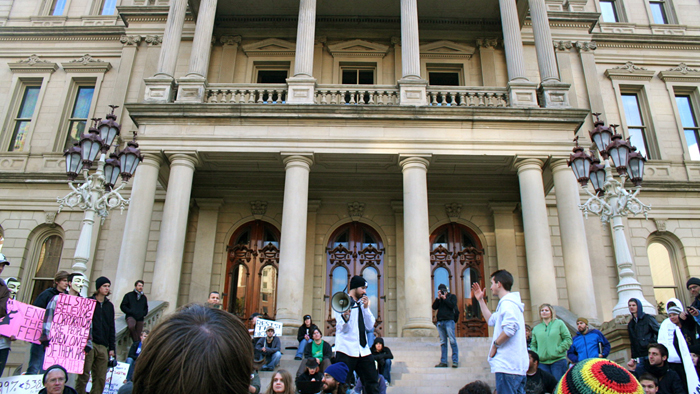 On Saturday, Oct. 15, Occupy Lansing officially began with a rally of approximately 100 participants in Reutter Park, two blocks from the Michigan State Capitol building. At the beginning of the week, before the start of Occupy Michigan, there were only a few people camped out in the park helping to organize the movement.

The group has succeeded in organizing as a democracy. Each day, a general assembly (GA) is held in the evening for discussion. Every individual’s point is taken into consideration when making decisions and passing motions as a majority. After the GA, individuals divide into work groups. These are smaller groups that are formed to organize such things as medical, community outreach, food, education, media, and etc. The work groups are responsible for handling matters in their concentration along with communicating with the GA.

Working as a democracy, there are certain strategies used by the Occupy Lansing protesters as used in many other protests spreading from Occupy Wall St. When having a GA, an individual with a point raises both arms and symbolizes a “point” with their hands. The other members make sure each point is presented. Another strategy is the “Mic check.” With a large group of people and not much equipment, the human mic is used for communication. An individual will say “Mic check,” and everyone will repeat “Mic check.” The crowd then repeats what the individual says in order to spread the message.

Going to the Occupy Lansing movement was an unforgettable and eye-opening experience. Even though I was with a group of complete strangers, I felt safe; everyone had everyone’s back. I also felt like an important member of the occupation community, like I was making a difference. The individuals participating are very open-minded to ideas, and they are extremely knowledgeable of the situation at hand. I was able to learn more about the issue and Occupy nationwide. Needless to say, I learned more on Saturday than I would all week in classes.