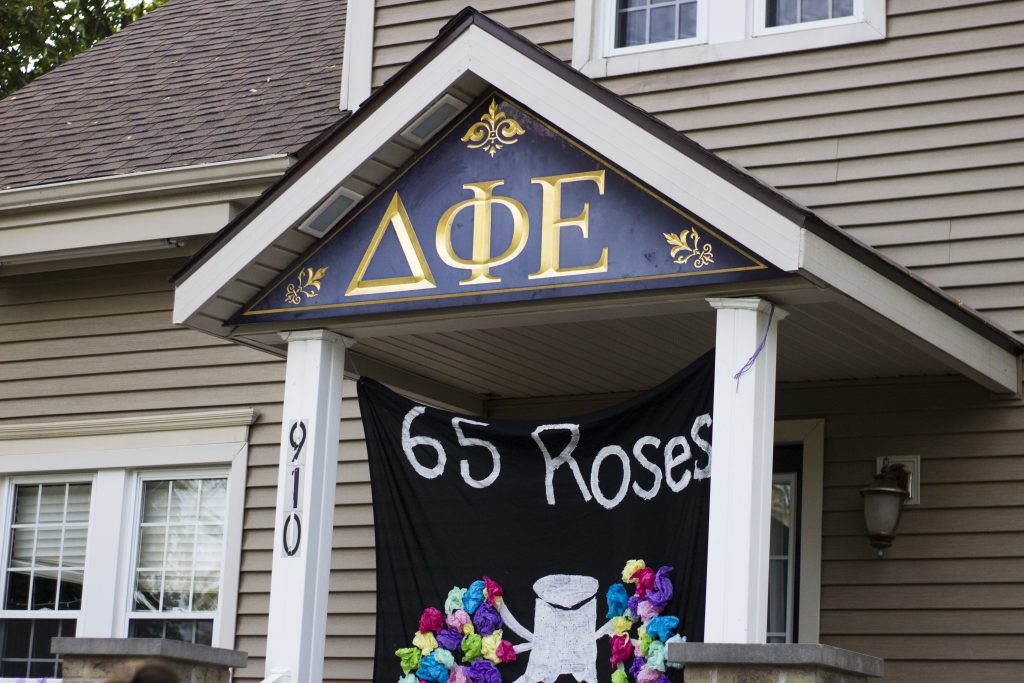 The Delta Phi Epsilon Beta Phi chapter kicked off their philanthropy week with events to fundraise for the Cystic Fibrosis Foundation, also known as the “65 Roses Foundation.”

“It’s known as the “65 Roses Foundation” because the woman who founded the foundation had three boys with cystic fibrosis and she would be on the phone talking to people and trying to figure out different ways to help her boys, but she didn’t want to tell her boys that she had this disease. Then her sons finally went up to her and said, ‘Mom I know what you’re doing. I know what you’re working for.’ And she asks them, ‘What’s that?’ They say, ’65 Roses’ because they didn’t know what cystic fibrosis was but to them it sounded like ’65 roses,’ and it has been a little nickname for the foundation ever since.”

According to Anderson, her chapter’s goal was to pass last semester’s fundraising of $2200. With their total, before today, being at $1800 and Pie-A-Deepher and Deepher Dudes tomorrow, they hope to exceed their goal.

The chapter’s overall goal is not just the money for donation to the foundation, but the overall awareness of what cystic fibrosis is.

“Cystic fibrosis is a genetic disease the people are born with,” Anderson said. When mucus builds up in their lungs, people generally don’t live past 30 unless they receive a lung transplant. But lung transplants are very rare because the availability for things like that aren’t readily available. And there’s currently no cure. So all the money we make goes directly to the foundation to raise money to find a cure.”

To fundraise for the foundation, the sorority held events throughout the week accepting donations. They started their philanthropy week with their annual Be-A-Kid-Again dinner consisting of dinosaur nuggets and mac and cheese. Followed by their tabling event for cystic fibrosis awareness in front of the Bovee University Center, Pie a DPhiE sister, and  “Deepher Dudes.” 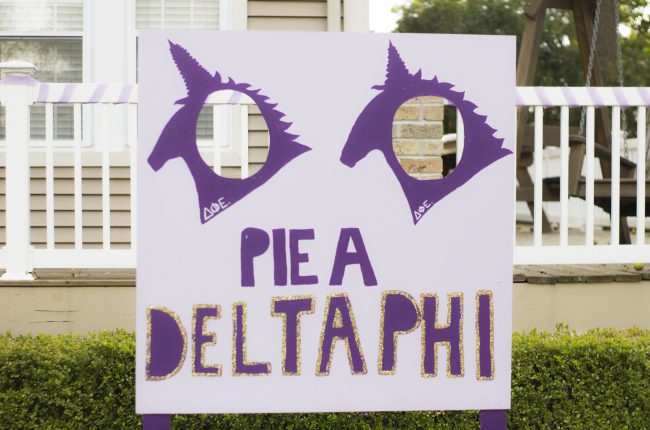 “Plus, Deepher Dudes will have Coach Bonamego and his wife are some of the judges, which is kind of like having a celebrity there,” Anderson said.

“We had 15 men competing for the crown but overall it was a blast and I could tell that the audience and participants really enjoyed their time there,” senior Pamela Henning said. “Our fan favorite was Duncan Tierney, runner up was Dan Austin, and the 2017 Deepher Dudes was Ben Zindler.”

Henning is Delta Phi Epsilon’s philanthropy chair and helped coordinate the events and oversee necessary tasks during their philanthropy week.

“I communicate with the chapter, my co-chair, and other chapters on campus to encourage awareness for the Cystic Fibrosis Foundation,” Henning said. “It’s really important to me because my older brother has it and it has affected his life negatively. I myself am very passionate but it is a super rewarding position.”

According to Henning, Delta Phi Epsilon was able to raise $2,369.75, passing their initial donation goal.