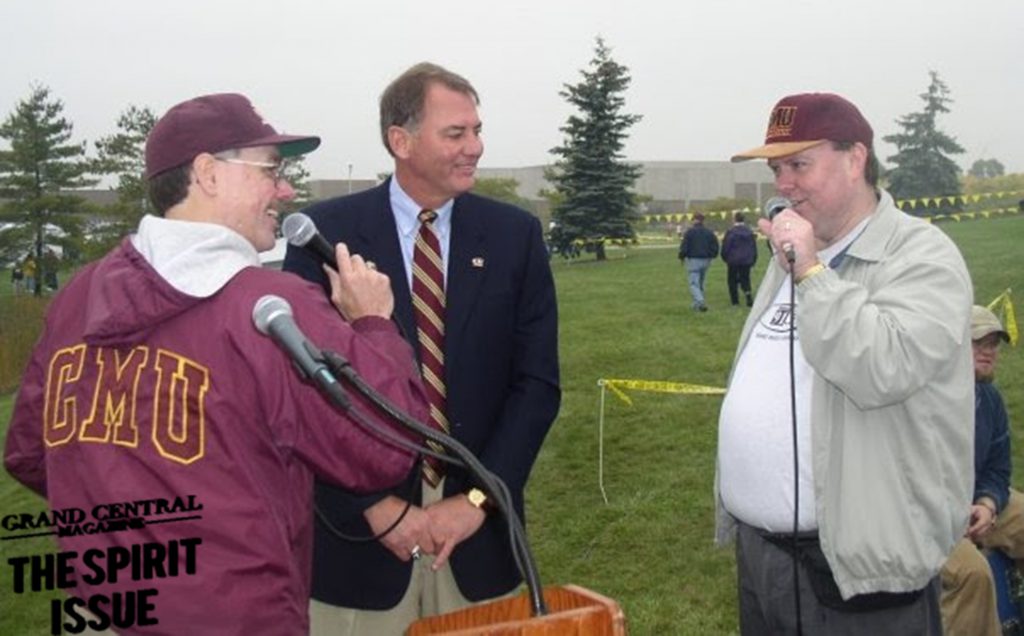 You just finished your first class as a freshman at Central Michigan University, in the overheated yet somewhat-new building of Moore Hall. The feeling of being a freshman seems daunting at first, however you’re comforted by the acres of farmland surrounding you and the small-town, nostalgic feel that Mount Pleasant has to offer.

This is what WMHW-FM aims to make listeners feel during their annual “Alumni Rewind” program.

Formerly called Alumni Takeover, the live program has taken place every homecoming weekend since 2000. During the program, alumni in the double digits come to the WMHW studio to be interviewed by the student staff, guest DJ their favorite tracks from their college years and learn more about the evolution of the Broadcast and Cinematic Arts (BCA) program since they graduated.

Bill Thompson, a ’78 alumni of WMHW and one of the founders of Alumni Rewind, said the idea for the program was not as extensive as it is now.

“About seven of us [alumni] from the 1970s originally thought of it as a way to showcase some of our older radio shows from noon until the start of the game. Dr. Peter Orlik approved, and an email list was soon put out,” Thompson said. “Our first year, we had about 30 alumni come back for the program.”

None of the founders anticipated that the program would still carry on today.

“We thought we would just be doing this for a few years, just play some records and go home,” Thompson said. “The fact that the program is still being done today is so impressive to us.”

A sophomore at the time, Thompson started going on the air in 1974 after getting a “radio license.” While the station is far more computerized now than it was back in the early 1970s, Thompson said that he is appreciative of the technique it takes to run a radio station today.

“Back then you physically run a station, which was a great thing about our BCA program here. Even though the equipment is a bit different, there’s still a similar technique and skill needed to be in radio.”

Since its start, Alumni Rewind has expanded its air time in recent years to be from 8 a.m. the Friday before homecoming to the start of the game at 3 p.m. on Saturday. This year’s Alumni Rewind differs from past years’ in that the WMHW student staff is almost exclusively running the program.

“There’s a lot that goes into setting up the program that not many people would think of,” Johnson said. “Training the DJs, getting sweepers on the air, applying for business grants…. everyone at the station is working super hard to make this program as successful as it can be.”

While taking a step back this year, Thompson and the other founders are hopeful that Alumni Rewind will continue to succeed.

“This year is the first year where us alumni are taking a step back and more so overseeing the program than running it,” Thompson said. “I have to give a lot of credit to Abby for doing an incredible job with promoting the program. We still want to be there to help the students and see their progress, but I think Alumni Rewind will survive with students like these.”