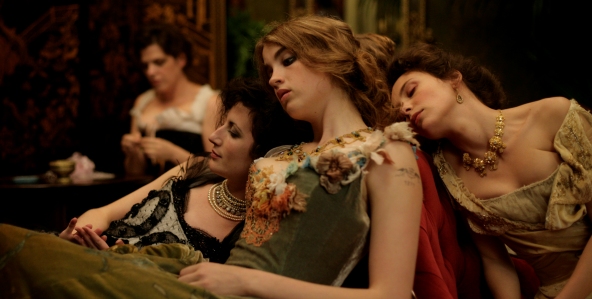 The concept of a “double bill”— watching two films in succession that, often times, share some sort of commonality — is one that holds massive intrigue among film lovers. There is something almost indefinably pleasing about sitting down to watch two films that hold some sort of unity, and that is amplified even further when looking at films from two different time periods.

In the case of this week’s double bill, one of the films is birthed from ’70s European and exploitation sleaze while the other is a product of a more high-minded and ambitious brand of art-house cinema.

“Fascination,”  released in 1979 and directed by Jean Rollin, is a movie most people probably wouldn’t take very seriously. It has an undeniably thin plot that often only seems to serve as an excuse to add more divergent sex scenes. It has shoddy acting, it has a few awkward, even baffling, script issues and it doesn’t seem to differ that much from most of the low-budget horror films that were released around the same time.

What makes this film noteworthy, however, is that Rollin is a remarkable formalist. He has an uncanny eye for detail and each scene seems maximized as an utter feast for the eyes.

The film’s plot involves a “blood cult” that lures young men into their mansion—in this scenario, it is a young thief that is hiding out—and sacrifice them to satiate their thirst. If this sounds precisely like the type of rote material found in a ’70s sexploitation feature, that isn’t very far off. Yet, it is all so intoxicating to watch. The rooms of the mansion are colored in rich hues that pop off the screen, and the outdoor scenes are shot with a warm, pastoral beauty that recall the best work of the great cinematographer, Sven Nykvist.

“House of Pleasures,” similarly, is a sex film that is very artistically accomplished. Where this film differs from “Fascination,” is in its emotional and very human treatment of the material. This movie, which deals with a French bordello in its final days at the turn of the 20th century, manages to defy all eroticism, even with its subject matter being ripe for exploitation.

Bertrand Bonello’s 2011 feminist masterpiece deals with the perils of being a prostitute and even more importantly, a social outcast. Every time there is a sex scene, it feels dangerous, joyless and mechanical. The men seem to be the only ones ever having fun, and they often degrade and insult the women they are paying for. In one particularly wrenching scene toward the beginning, one of the girls is sliced at the corners of her mouth after being tied up by one of the men. She earns the nickname “The Woman Who Laughs” in cruel mockery of her scars.

So, why then, should this film—a complete triumph on every level—be watched alongside a flawed cult oddity like “Fascination?” Well, for one, both are horror films that use their formal rigor to create a surreal and claustrophobic atmosphere. “Fascination” is more explicitly horror than “House of Pleasures,” but in both films, the lavish period sets are used as a backdrop for the decadence on display.

Both of the films mostly take place indoors and more notably in “House of Pleasures,” the outside world remains enticingly out-of-reach. The two also provide stellar examples of transcending the trappings of the period piece genre. While Rollin incorporates ’60s pop-art stylings and sexual liberation into his film, Bonello borrows modern pop songs to fill some of the most emotional moments.

The double feature idea works especially well here because both of the films are so visually immaculate. They each create a world to get lost in (although, it’s probably not always desired), while also offering an ample amount of narrative interest (in the case of “Fascination” there is a lot of fun to be had). Most importantly, they could each be seen as period pieces that also offer significant commentary on the decade in which they were produced.

Both of these films are available to stream on Netflix Instant.