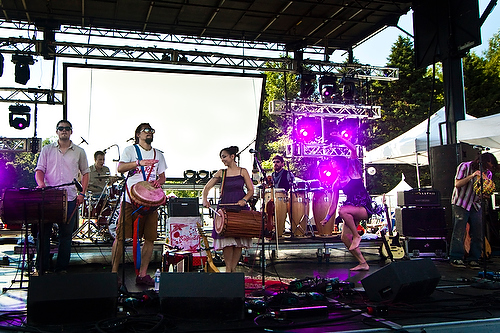 “Humble, homemade, and patched together… but still capable of flight.” This is the imagery provided by multi-instrumentalist, and front woman of the Ragbirds, Erin Zindle.

The Ragbirds began in 2005, at TC’s Speakeasy in Ypsilanti. This venue, like so many before, failed under the pressure of the economy’s instability, and the birthplace of the Ragbirds was closed by the Ann Arbor Bank in January, 2009 – the building’s outstanding loan to the Block Group LLC had reached $200,000.

The Ragbirds have since become a powerhouse of Michigan folk music. This summer alone will boast an impressive festival schedule for the group: Summer Camp Music Festival, Electric Forest, moe.down, Dunegrass, Hoxeyville, and Headjamz – just to name a few.

The Ragbirds performed on Electric Forest’s Tripolee stage just before 6p.m. on Saturday, July 1. The laser lights were cooling from Friday night’s extravaganza, and a refreshing lack of glow sticks made for a unique Electric Forest performance – but this was no civil war ragtime.

Traditional instruments, such as the violin, can be modified with wah pedals, and neo-folk attachments to create a modern sound, without the supervision of a drum machine.

“Especially with all these world music sounds, it’s so easy to fake all that”, percussionist Randall Moore said. “We’re a straight live band.”

The Ragbirds have been known to frequent Mount Pleasant. Most visits include a loud night at Rubble’s Bar, but during this spring’s Max and Emily’s Concert Series downtown Mount Pleasant, the group performed for 1,200 people on a closed

The Ann Arbor favorites have played in more than 40 states, with a schedule of up to 150 shows each year. Their 2009 international release of “Finally Almost Ready” led to their massive success in Japan – with the album’s “Book of Matches” topping the charts in Osaka.

Independently, the group has released their 10,000th album, with three studio albums pressed – and their fourth expected for release this fall. (Not to mention Erin Zindle’s solo project, “Scenes from The Fragile, Agile, Avian World”, which was released June 1.)

The group has also become synonymous with humanitarian concern. The group released the single, “Washed Away”, in 2005. Proceeds from this recording were added to relief funds for Hurricane Katrina survivors. In order to reduce their carbon footprint, The Ragbirds now tour in their bio-diesel fueled tour bus – which can be fueled from any greasy slop-stop.

The Ragbirds deserve their attention. This not-so-patched-together group of talented musicians is a great example of open mindedness, humbling tendencies – and the undeniable capability of flight.

Book of Matches by The Ragbirds

The Ragbirds at Electric Forest from Ryan Nielsen on Vimeo.