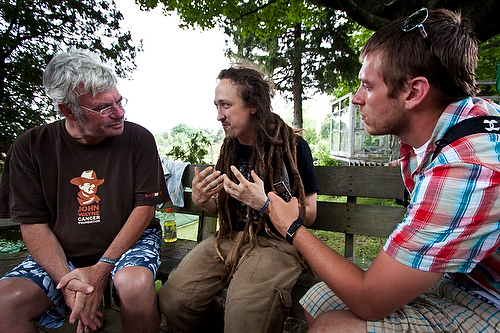 This nation-wide guerilla advertising campaign was met with legal action from the city of Boston. The “coordinated hoax”, as officials deemed it, shut down more than a dozen highways and overpasses throughout the city. Who was to blame for this terrorist act of promotion? The answer – is Zebbler.

Zebbler (Peter Berdovsky) is a genius of visual innovation. After graduating from the Massachusetts College of Art and Design in 2006, the lighting expert turned towards software creation, and visual technology enhancements.

Since then, Zebbler has remained a visual prodigy – heading the Shpongle Experience, and countless other musical complements. Shpongle’s set, which was accompanied by Zebbler’s visually overwhelming project, “Shpongletron”, quickly became the talk of the Electric Forest weekend.

Appropriately, Zebbler, alongside project partner Sean Stevens, held a press conference in wake of their 2007 Boston incident’s arrests, and trial.

Journalists were shocked when the duo insisted that all conference questions pertain to one topic – 1970s haircuts in America.

Grand Central Magazine had a chance to continue this famous conversation. The following poolside interview with Zebbler was co-administrated by Paul Young (GCM Arts and Entertainment Editor), and Tom LaPorte (Online media legend, Assistant Water Commissioner for the city of Chicago, and head of media relations for Burning Man festival in Nevada) inside the artist’s village of Rothbury’s Electric Forest. Enjoy.

PY: So what is your favorite 70s haircut?

Z: You know, I really didn’t have much understanding of the 70s hair to begin with, and even now I still don’t. I’m kind of down to explore the era a bit more, you know?

PY: I feel like I can name only one 70s haircut. That must have been a tough press conference.

Z: Well especially me. I was like, ‘I’m not even from this country.’ It was like, ‘what the fuck’?

PY: Where are you from then?

Z: Belarus originally, which is former Soviet Union. All I know really is like the Beatles maybe. And I know that 70s straight-hair look for the dudes – like greasy straight hair for the rockers.

PY: Basically my dad’s haircut from then.

Z: Is there a name for that style?

PY: I would call it the ‘Bill Young’, but he might get offended.

PY: Enough about my dad. As far as lighting goes, why does the lighting engineer not always get the limelight? Is this changing at all?

Z: I think things are changing now because technology is improving so much that more people are able to use that new technology to create something really cool. Lighting wise, giant festivals are always a huge inspiration for me. You get to see technology that is so expensive, and normally is out of reach of anyone. You know, when 100,000 people come together that money just pulls together to bring out the best lighting sometimes. Coachella was like that for me when we performed with Shpongle. It was just overwhelming. There were three-dimensional floating LED screens that were transparent – filling the tent. Thousands of people just tripping out – so hard. It was beautiful. I mean, really beautiful. So I’m inspired by that, but I’m also inspired by just… the unpredictability of it all. Technology is changing so fast, you know, kids today, like 18-years-old – they’ve already been exposed to it. Sometimes it matters how much you’re exposed to the new technology. Otherwise you get used to the same kind of flow. So all the new technology coming out is making things unpredictable. It’s amazing.

PY: Give us an idea of your role in all of this. For those of us in the audience it seems like fun to play with lights – but what kind of work goes into a large-scale lighting production such as the Spongletron?

Z: Basically, I headed the project. We had such a short time to do it that
I needed to put together a team of really competent people to help me out at every level. So we had about four videographers and video editors working on this project – video animators too. We had a guy who was really good at welding metal. I created the sculpture myself – I made a ton of content for it. Pulled together the whole concept. We have a really talented seamstress Miss. Tess – she was awesome. She made all of our screens. Then, of course, there were the people that helped manage the tour.

PY: What about during the show?

Z: The way the thing is controlled is through custom-built video software called Zebblertron. A friend of mine from San Francisco (Interim Descriptor) is writing it for me. We were able to tweak the code of it to kind of match our needs a little more. Now we’re making it more mapping friendly, and we encoded the ability to control lights with it as well. So I have a controller part called ‘Exponent’ that sits on my VJ table. We usually run an Ethernet line all the way up to the booth, and that’s to control the lights – and the controller also controls the video at the same time. Both on the controller, and the computer, I’m able to change things up. I also have a line input from the overall DJ mix that triggers video effects that are frequency sensitive. So all that map stuff can also flutter to the music at times. And at this point, I know the set so well there are times when I have digital tracks, and visual content, and ideas for each one of those things – that I just kind of go with it.

PY: Anything we should look for in the works?

Z: Well, you should check out the Zebbler Encanti Experience. It’s a bass-heavy project, and we just love rocking dance floors with bass-heavy music – but it’s all about visuals too. When we perform in our ideal environment, it’s three screen wide projections that are all floating between themselves and pulsing to the music. At this point I feel like I’m pretty good with visuals, and this guy’s a prodigy with music so we make a pretty good team. We toured with EOTO this spring – opening for them. That has been most satisfying for me. We see eye-to-eye completely on this project. We can do pretty much anything we want to do with it really.

TL: Can I ask a couple questions?

TL: Did you get with Shpongle before or after the incident in Boston? Were you already doing lighting?

TL: Was that a break for you in any way?

Z: No, not really, but I got a lot of attention right after that. The most random people – people trying to pitch TV shows to me – like me being on MTV or some crazy shit. But it all fades really quickly. What I was trying to do was be myself, be an artist and continue doing visual work. Kind of what I was already doing. What helps really, is when people find out after. It was a really fun thing to do, and it’s a fun way to remember me as well – but most of my clients now are unconnected to that.

TL: Is there a turning point that you can find in musical lighting and theatrical stage lighting, that kind of thing, whether it’s the technology or a band that made particularly good use of it, which elevated the lighting person to a higher level of stardom?

Z: I think it’s the laptop. DJ lighting goes way back. In the 70s there were film projectors, there were all sorts of projections with lights that were not just straight can lights, or moving lights – and it kind of devolved from there. It was more complicated and complex – and unaffordable until laptops came out, and video software became digital. You know, from analog being so prohibitive, to digital in the early 2000s where there was that shift where kids are able to afford laptops. At first in college I was trying to write my own live video software, and I did it, because there was nothing there at the time. In like 2003/2004 someone came up and said, ‘Hey, check it out. There are these three software packages that just came out that are just there to control visuals – live. That was kind of the jump of it all.

Z: People still to this day don’t consider visuals to be that important – and artists to not be as much of a celebrity as a DJ or musician. But I think what’s changing to some degree, and some purists hate this, is that people are expecting more and more of a spectacle. Right? So If you’re just there with no lights, and just music – some purists are really into it because it’s ‘all about the music’ – but because of the new expectation, more and more artists are almost stuck in that necessity to one-up their visual show as well. And that breeds a necessity for visual guys to step it up – because now there’s a demand for them – where there wasn’t before. But it’s still about who’s the best, and who puts on the best visual show.

TL: What are the attributes of the best visual show?

Z: You know, the best is different for everyone. Just like there are different music genres, there are a lot of visual genres to choose from. I think in a festival environment, people want to be overwhelmed – to some degree. Believe it or not, there are a lot of high people in the audience who want to have their senses extra-elated by the sensation of a spectacle. So be it music, or be it the visuals, people just want to orgasm out there in the audience. They just want to cum. And whatever flutters your brain at the right frequency, you know, that’s it.

TL: Flutters your brain – I love that.

Z: Yeah, but at the same time it’s got to be really in-tune with the music for it to work really well.

TL: Do you have a style that’s identifiable with you? Do lighting artists in general have certain styles, for example, the way a horn soloist would be distinct and personal?

Z: I think it’s more like the style of music. Like I have a style of visuals that go better with a certain kind of music than others. I tend to like more psychedelic stuff, and I like dance music as well. I’m also into the electronic music world – but it’s easiest to grab visuals for that kind of music because that’s the world where I live.