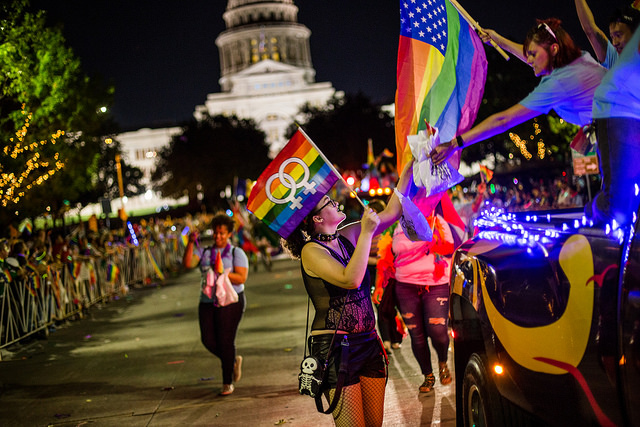 Story by Sarah Wright. Photo by ACC, courtesy of Creative Commons. All gifs taken from giphy.com.

Some couples might prefer to watch movies like “Titanic,” “La La Land,” or “The Notebook” with their respective partners. As good as these heterosexual romance stories are in terms of watchability, there are plenty of movies that involve LGBTQ+ romance stories, and can be equally enjoyable.

Blue is the Warmest Color
This french film is a cultural classic that tells a tragic love story between two main characters. The film follows Adèle, a high school student that has began to question her sexuality after fantasizing about a blue haired girl once passed on the street. She later meets the blue-haired girl, Emma, at a lesbian bar and the two soon begin a friendship that blossoms into a passionate relationship. As their relationship grows, the two suffer many hardships. The film is visually beautiful and it doesn’t completely focus on the social acceptance problems that can come with an LGBTQ+ relationships, but rather the aspects that make these relationships no different from a heterosexual relationship.

Carol
Set in the early 50s, this film follows Carol (Cate Blanchett), a closeted lesbian woman, going through a rocky divorce with her husband after he discovers her true sexuality, and Therese, an aspiring photographer who is dissatisfied with her boyfriend. The two meet at a department store and soon become attracted to one another. They start a relationship, even though Carol’s husband threatens to use her sexuality as means to obtain custody over their daughter. Because this film is set in the 1950s, it gives a powerful message as to how complicated life can be as a gay person in a time when it was not fully accepted. The romantic aspects of this story are equally endearing in terms of how both actresses work with one another.

But I’m a Cheerleader
This movie is a very satirical (and slightly dated) take on what coming out can be like, specifically to an intolerant family and friend circle. This movie stars Natasha Lyonne (from “Orange is the New Black”) as high school cheerleader Megan, whose family and friends suspect she is gay and promptly force her into reparative therapy camp in order to “cure” her of lesbianism. As she spends the next few months there, she gradually learns to accept who she is while also falling for a rebellious lesbian named Graham (Clea DuVall). This movie is humorous in its outrageously stereotypical portrayal of both the LGBTQ+ community, as well as those who are completely ignorant of the community, while also making fun of expected gender roles that have been present in society.

Hedwig and the Angry Inch
This rock movie tells the story of the transgender Hedwig (formerly Hansel) who receives a botched sex change operation before moving from East Germany to America with her husband Luther, pre-fall of the Berlin Wall. After her husband leaves her for another man, Hedwig soon forms a rock band with with Korean-born army wives. Although her band becomes “internationally ignored,” she travels around the country in pursuit of love and fame. The movie is a cult classic that gives a strong message of celebrating the losers and misfits, and of learning to love and accept who you are.

Brokeback Mountain
This classic film stars Heath Ledger and Jake Gyllenhaal as two cowboys who begin a romantic relationship while herding sheep through the Wyoming mountains. Because of the harsh realities of homosexual relationships during the 60s, the two go their separate ways and marry women, but they continue to meet up occasionally for a romantic tryst. The story has been considered a romantic movie classic that tells a heartbreaking story of a romance torn a part by circumstances beyond their control.

Each of these movies contain classic romantic and and romantic comedy movie tropes that make them appealing as appealing to lovers of the genres as movies with heterosexual leads do, while also displaying a message of acceptance for all types of love.