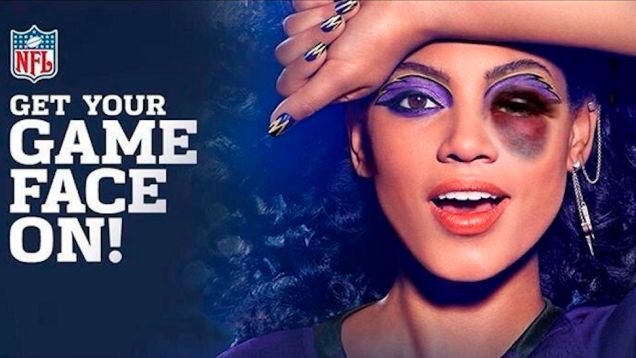 As a long time sponsor of the National Football League, cosmetic brand CoverGirl has recently released a series of new ads. The ads, geared toward NFL female fans, entails models with customized makeup looks in support of their favorite teams with the phrase, “Get Your Game Face On.”

The ad drew controversy when NFL protestors altered a Baltimore Ravens-themed ad to include a black eye on the model in response to the recent release of a video showing Ray Rice punching his, at the time, fiancee. The photoshopped ad is an attack on NFL commissioner Roger Goodell, who originally banned Ray Rice for only two games. After Goodell admitted his mistake, Rice has since been cut from the Ravens and suspended from the NFL.

The protesting has gained fervor in outrage over the NFL’s initial leniency and toward the continued partnership with CoverGirl, a company who has long insisted on their support of the empowerment of women. Twitter users in support of the ad have called for Goodell to step down from his position as commissioner and are urging NFL sponsors to step away as well.

CoverGirl has yet to remove the original ads from their website or Instagram and it is doubtful the company will. Spokesperson for the company, Laura Brinker, released the following statement:

“As a brand that has always supported women and stood for female empowerment, CoverGirl believes domestic violence is completely unacceptable. We developed our NFL program to celebrate more than 80 million female football fans. In light of recent events, we have encouraged the NFL to take swift action on their path forward to address the issue of domestic violence. “

As for other NFL sponsors, only a few have also taken action. Nike removed Rice’s jersey from their website and ended their contract with him, while EA Sports took Rice off the roster for the popular Madden NFL video games.

I applaud companies, like Nike and EA Sports, who are willing to take action and show support for the problems on hand. Domestic violence is an issue that plagues an innumerable amount of women and men around the world every day.  The issue should be taken seriously, and those in positions of power need to bring light to what is happening.

Even more so today, aided by social media, companies of this size and reach have an immeasurable sphere of influence to make change in this word. Instead of sitting on the sidelines, I believe they need to take action with that given power. These companies need to uphold substantial, human values.

Continuing to promote a league that will “look away” from what is happening for personal gain because a player generates a large profit is not keeping people safe nor upholding values that contribute to the health of our society.

CoverGirl was right to release its statement, and even more so to directly address the NFL and its recent decisions. CoverGirl is a company that should feel obligated, especially because it pushes that their products are aimed to “empower women,” to speak out.

However, the cosmetics brand only took action after protestors made it clear what they wanted from the company. It has become apparent that the responsibility falls on the people who seek change to demand morals from companies who only seek profit.

It is now, more often than not, the job of those who care to hold companies to standards. Next time a person disagrees with the actions a corporation takes he or she should make it known,  just as these protestors did with CoverGirl.