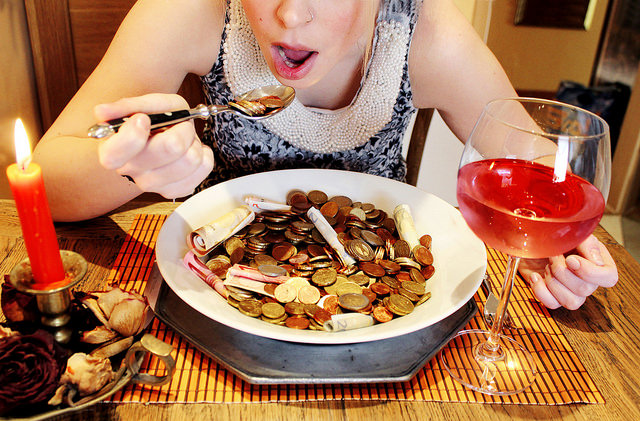 There are many aspects of ourselves we do not wish to share. In fact, there are even aspects we work hard to keep hidden.

Some college students come from socioeconomic backgrounds where money isn’t a concern, but many are stuck financing their way through school. Without financial support, students manage scholarships, work and student loans to get through their years of higher education. While school is the main focus, grades may slip as a result of not having enough time to divide between studying and working. If grades slip, the scholarships that one once qualified for are taken away, and in order to stay in school the student must take on more hours at work.

When a student, or anyone in fact, is barely getting by, situations of “food insecurity” arise.

Understanding Food Insecurity
We asked several students at Central Michigan University what they believed to be the definition of food insecurity.

When asked, “What does food insecurity mean?”, CMU students responded with guesses involving poor culinary skill, eating too much, being self conscious about what one is eating and defending existing food in a manner similar to an angry dog.

Food insecurity does not mean any of these things. According to the USDA, food insecurity is “a state in which consistent access to adequate food is limited by a lack of money or other resources at times during the year”.

Let that sink in.

Instead of just lacking motivation to cook meals, what food insecurity actually defines, is not having the means to purchase the ingredients to do so. For a college student, trying to juggle school and work while dealing with hunger is not easy, and only increases the likelihood of falter in one of the areas.

Breaking it Down
Published in October 2016, the study, Hunger on Campus: The Challenge of Food Insecurity for College Students by the National Student Campaign Against Hunger and Homelessness found that approximately 20 percent of students at four-year colleges qualified as having low level food insecurity. Of those who qualified as food insecure, the majority were first generation college students of color. Many of these students also struggled with insecure housing situations, lack of money to buy books and even have had to drop classes for financial reasons.

According to the study, the majority of these students had paying jobs. They also received federal student aid through grants, and in some situations food stamps.

To some, the decision to go to college may seem unattainable when financial support is not in place. However, in order to break the poverty cycle, students have to become their own catalyst for change. Through earning a college degree, they become qualified for future high paying jobs and gain access to wealthier social circles.

Sustaining Yourself in College
If you are experiencing food insecurity, college isn’t the worst place to be. Keeping an ear out for campus events that offer free food is always an option. Also, just by focusing in class, Pocket Points has created an easy way for all students to earn discounts and freebees from local food joints. There are several churches within walking distances of campus that have food pantry setups, as well as the Isabella Community Soup Kitchen.

While friends may not be aware of your situation, remember, your school and community want you to succeed, and offer services that can alleviate some of the financial burden.