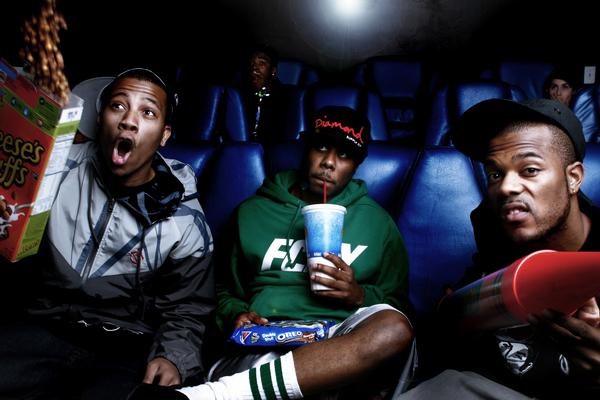 This week’s Get Familiar! offering features the hip-hop group from Southern California- Pacific Division, better known as Pac Div. The group consists of three members, brothers Mibbs and Like, and close friend BeYoung. Being that the guys have known each other for so long, they have had time to build a buzz and perfect their style.

Speaking of style, theirs may be described as ‘the west-coast cool kids,’ because they have similar flow and rhythm to that of The Cool Kids, who were here performing at CMU last Friday. Pac Div is also one of the leaders in the ‘New West,’ the movement that west coast hip-hop is experiencing, yet they remain heavily influenced by the old-school west coast style.

Pac Div’s first major project was Sealed for Freshness: The Blend Tape, which achieved local success when released in 2006. Pac Div then took a bit of a hiatus before dropping their next mixtape in 2009 entitled Church League Champions.

Church League Champions is the mixtape that helped Pac Div to gain nation-wide popularity and attention, which was grabbed by their cool rap style that perfects the combination of laid back and in your face flows. This flow fusion is best displayed on the track “Knuckleheadz,” as well as “We The Champs,” “Mayor,” and “Shut Up.”

This attention was not wasted as the highly anticipated next project from the group, Don’t Mention It, was released the following year. They stick to their roots with songs such as “It’s On,” “Birds,” “Waves At The Prom,” and “Shine.”

The most notable song from Don’t Mention It, however, may be “Don’t Forget The Swishers.” This is thanks to the features of LA rappers Dom Kennedy and cARTer, and the Cleveland native Chip Tha Ripper.

In early March of this year, Pac Div released their latest project, Mania! which continued their trend of sticking to their true style and west coast flavor. Stand out tracks from Mania! include “Anti-Freeze,” “Take Me High,” “Your Fuckin’ Song,” and “Still A Knucklehead.”

Pac Div’s next project is The DiV and is slated to drop on November 8th of this year. Don’t Mention It is available for free at itspacdiv.com and the other projects are just a Google search away.