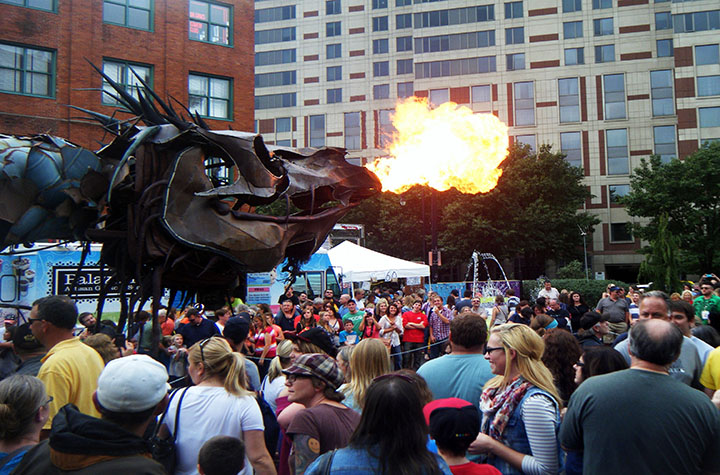 A fire-breathing dragon seemed to take a lot of attention away from the giant panda constructed from car tires.

People from around the world flocked to Grand Rapids for ArtPrize to witness these and thousands of other creations scattered throughout the downtown streets. The fifth annual event came to a close this past weekend after 19 days of celebrating the art of alternative expression.

“A wealth of talent exists in this city,” said Grand Rapids artist Reb Roberts. “Art Prize gives us all a chance to exhibit it.”

Roberts owns the Sanctuary Folk Art gallery in Grand Rapids, 140 S. Division Street, where he exhibits his own art as well as other artists’ work. He displays pieces — mostly conventional paintings and sculptures — for the public to see year round.

A couple buildings down from his gallery, Roberts painted a colorful mural that stretches about two stories high. It’s a bright contrast to the rest of the bare wall.

“Every community has its ups and downs, and we’ve definitely seen some downs in the past 10 years,” Roberts said. “These past couple of weeks have given testament to the power of urban art to repair a community.”

Although the competition officially ended Friday, 40-year-old itinerant muralist Michael Mayosky from Kansas City, Mo., did not finish his piece until a day later. And that was the art of it.

He started his project, “Love,” the first day of Artprize and continued working on it in front of crowds for the duration of the event. Painting images on small, individual canvasses, he would eventually piece them all together to create one massive mural. Some of the art was the finished product, while some of the art was watching the process leading up to it.

“I like performance art because you give people insight into how it’s done beginning to end,” Mayosky said. “I call it extreme art because I have to work with the distractions of 20,000 people.”

“Gon KiRin,” Mandarin for “Light Dragon,” is an interactive art piece designed by Ryan Doyle that provided some extra warmth for spectators. The 64-foot long, 70,000 pound dragon was constructed from recycled metals. Featuring a DJ booth about 20 feet from the ground, as well as a 250 gallon propane tank, the art piece spit fire and electronic beats to the audience.

“It’s all about interaction and giving people a chance to encounter something they’ve never seen before,” Miller said.

Senior Ryan Felix  came to ArtPrize for its final weekend to experience a broad perspective of the various different media of expression. As an applied arts major, he took with him a deep appreciation of the creation process,.

“Everyone takes their own experience from it,” Felix said. “It’s nice to see the art community come together.”

Thousands of spectators packed the three-square-mile space to witness the collaboration. A total of 446,850 votes were cast this year, according to the ArtPrize official website.

Grand Rapids resident and ArtPrize volunteer Peter Hess has worked the event since its inception and said it attracts numbers into the hundred thousands. It generates millions of dollars in revenue for the city.

“It’s important to host events like this to bring people into the city and expose them to the culture,” Hess said. “It generates money which keeps the businesses happy.”

Jake Susick, 22-year-old Grand Rapids resident, has not had a day off working the register at Elliots News and Magazines liquor store, 21 Ottawa Street, for almost three weeks.

“I guess it’s good for business, but harsh on the employees,” Susick said. “The insanity of it all is a little mind-numbing.”

According to Susick, he has been downtown for all of the past 19 days but still could not find much time to check out the art. From what he has seen, the art seemed a bit more rushed than last year.

Hess also noticed the lack of stand-out art compared to creations from past events.

“The main difference from last year is that there really is no big buzz about what’s on the streets,” Hess said.

He said it might have to do with people congregating only at the main museums and missing the subtle venues like coffee shops, pubs and other small businesses.

Ben Fairbrother, security guard at Grand Rapids Art Museum, said people touring the event have been respectful and incidents have been minimal.

“From what I’ve seen, everybody is here to appreciate and engage with the art,” Fairbanks said.

Trevor Black, security for a down town hot spot nicknamed the B.O.B., saw a similar crowd of calm, yet upbeat art enthusiasts of all ages.

“Witnessing different cultures and generations coming together brings a sense of pride to the city,” Black said.

As the last Saturday of ArtPrize 2013 shifted into evening, crowds began winding down as galleries slowly started disassembling. But in the middle of the B.O.B. square, in-between the rubber panda and fire-breathing dragon, Mayosky’s paintings began making sense.

By about 6 p.m., the dozens of blocks with Mayosky’s art morphed into a mural of his daughter.

Watching the individual, seemingly obscure forms of expression come together into one big picture seemed to offer the perfect sense of closure for the festival. The creative, two and a half week-old piece did not place in the competition, but Mayosky would not have it any other way.

“I hope I never win,” he said. “I would never come back because once you win, it’s only fair to move on and give others their chance.”