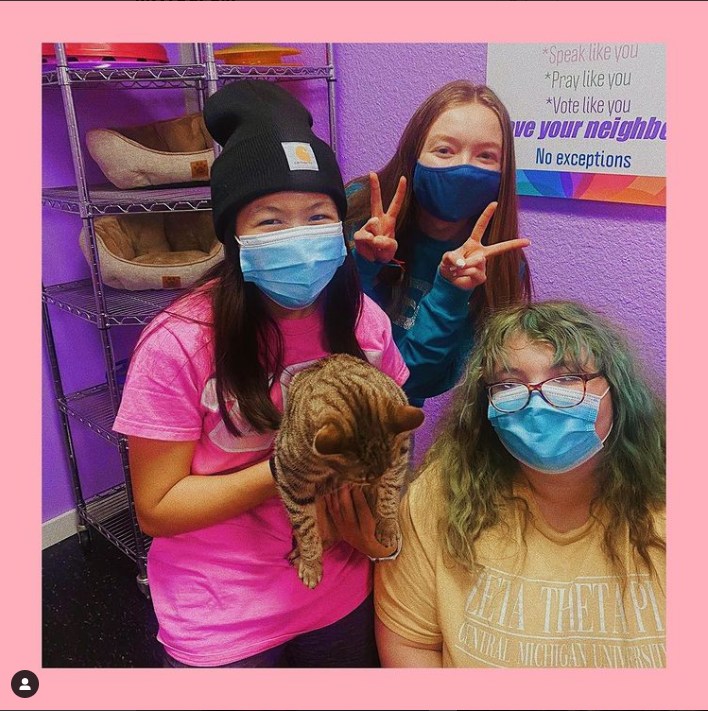 Voices chatter in the background as Emily Zinter snaps selfies on her phone. Her computer screen full of black screens with white names lays behind her as she sits on her roommate’s bed, gossiping and making plans for the upcoming weekend.

She doesn’t even notice when her sorority president calls on her to unmute her microphone and answer a question. The meeting remains silent for a few moments, until they realize a response will never come and they must move on.

“A lot of people like to describe it as awkward,” said Zinter, a sophomore sister in Zeta Theta Pi. “I don’t think it’s awkward because it doesn’t feel like you’re there, it feels like a waste of time.”

Zinter is describing her experience with virtual meetings for her sorority. The COVID-19 pandemic put all group meetings online, causing a lack of connection and engagement within organizations. Despite many events returning to in-person gatherings this fall, these lack of interaction and interest issues persist.

Many CMU groups have remained online for a majority of their meetings due to their size and a lack of space for them. Larger organizations, like ZTP, struggle to find places on campus where they are allowed to gather in full.

The CDC recommends at least 3 feet of social distancing indoors with mask use. With this guideline, it can be difficult to find a space large enough to accommodate 21 girls, said Genevieve Parks, the sorority’s community standards regulations and social chair.

Due to this recommendation, the group often does events and meetings outdoors or in off-campus apartments, she said.

An added difficulty to finding a space on campus is the program used to schedule events. ZTP has struggled to get its meetings approved with this program, and getting it done on time.

Engage Central is the CMU program that organizations use to find and book rooms on campus, Parks said. These rooms can be used for activities, meetings or anything the group needs, with the university’s approval.

“Engage is a CMU program that ties in all the clubs and RSOs,” she said. “I know this year, I think it’s the first year that they’ve used it to like book rooms because usually you’d be able to go and kind of get any room.”

Without a room on campus to meet in, the sorority must find other ways to gather and discuss upcoming events. Oftentimes this must happen in a virtual meeting, where it is difficult to keep everyone focused.

One of the main struggles is with interaction. People will type questions or comments in the chat box instead of raising a hand and unmuting their microphones, and they will not turn on their cameras, Parks said.

“It’s really just talking to an empty screen and hoping they reply back,” she said.

“You look into a sea of blank screens,” Zinter said. “Sitting on Webex where no one’s talking you’re like, ‘Oh, I could be doing literally anything else right now.’”

With all of these blank screens, people have struggled to connect with one another and in-person events aren’t much better because people don’t remember how to be social.

“It was very difficult to connect because everyone was apprehensive,” Zinter said. “We had been told, rightfully so, for like a year plus, stay away from people, don’t interact with people that you don’t know. There was kind of a bit of a learning curve in re-learning how to spend time with people again.”

The struggle to get to know one another through computer screens has caused additional issues at in-person events for specifically members who joined during the COVID lockdown. Now that the sorority can gather outdoors, the sisters cannot put together who is who, after never seeing their faces before.

“Sisters literally not meeting the new members in-person was, like, kind of weird,” Parks said. “Suddenly they were at events this semester and we’re like, ‘Who are you?’”

Other organizations have experienced these same issues with their virtual meetings and the shift to some in-person events. Phi Sigma Pi, the National Honors sorority, has faced similar struggles, said Parks, a member of both organizations.

It is not impossible to connect and interact with other club members, however. ZTP has discovered different solutions to their engagement issues that all follow CDC guidelines.

The biggest solution they have found is outdoor events.

“We really push to have events outdoors, so then people don’t have to wear their masks,” Parks said. “So I think  that’s been a really big factor in, like, people actually getting to know each other.”

Parks said she didn’t struggle as much with connecting because she went to more of the in-person options, as opposed to those who only attended virtually. Zinter had the same experience attending as many in-person events as she could.

“If there was an in-person event happening, Emily Zinter was there,” she said.

ZTP is trying to find even more ways for sisters to interact and get to know one another. Parks sent out a survey into forums to see if the sisters wanted a social with other organizations, but received an overwhelming amount of responses wanting a more interpersonal social with their own sorority. Zinter agreed, saying her favorite event during COVID was the sister dates.

“With sister dates, which was only between two girls, you could obviously do basically anything you wanted: go into each other’s houses, any building on campus, like that gave a lot of flexibility which I think, in turn, also made people less stressed because again, you’re going to be a lot more on edge with 20 girls in a room than when you are literally one-on-one,” she said.

Despite struggles with virtual meetings and CDC guidelines, this sorority has tried to create ways for sisters to engage and connect. From one-on-one sister dates to small gatherings with masks on, they’ve found ways to keep new members a part of the group.

“This semester all the new members are very excited,” Parks said. “They’ve all expressed how they really like what we’re doing, like, with recruitment and their new-member period.”