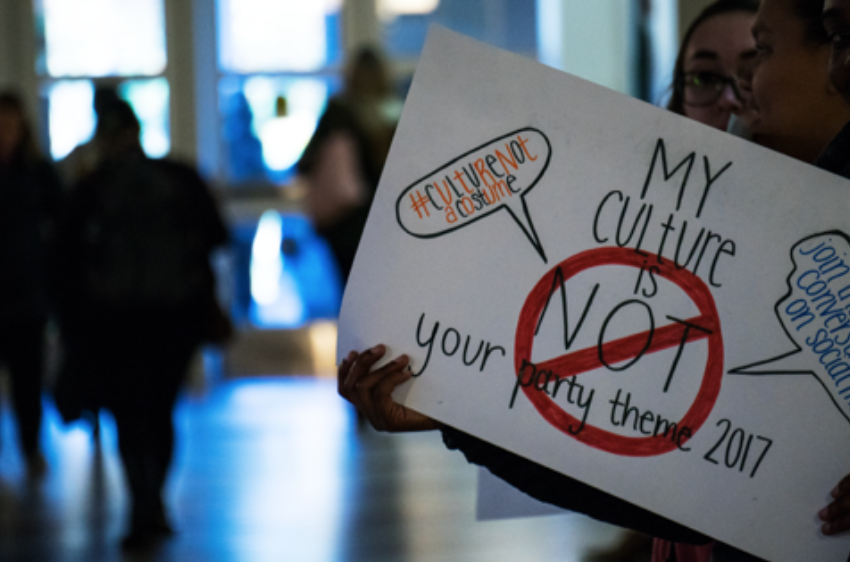 A Caucasian man stood on the lawn of the Bovee University Center with a brown-painted face, a fake afro on his head and a gold chain around his neck.

The reason? To encourage people not to do what he was doing.

That was last year. This year, Diversity Committee Chair Brianna McCrary revamped the “Culture Not a Costume” campaign so it didn’t involve painting anyone’s face a different color.

Cultural appropriation is an especially hot topic around Halloween at Central Michigan University, according to McCrary. Many people dress up in costumes that appropriate other cultures, like wearing a faux Native-American warbonnet because it looks cool, or putting on Henna tattoos simply because they’re cute.

McCrary learned from the mistakes made the previous year, and decided to take the campaign in a different direction.

“After doing some research, we reached out to people from cultures that have been oppressed, and asked if they could dress in their cultural clothing, so we could get out a clear message,” McCrary said. “This way, the people in these different cultures in our community had the opportunity to say, ‘Hey, this is the life that I live every day, and it’s not a costume.’ It makes the campaign more meaningful.”

The Diversity Committee sponsored by the Student Government Association puts on their “Culture Not a Costume” campaign every year. The campaign’s purpose is to show students, staff and faculty that it is wrong to use garbs, body paint and hairstyles to exploit a culture.

The “Culture Not a Costume” campaign last year was a lot like the ‘do as I say, not as I do,’ explanation that parents give when their children hear them curse or see them smoking a cigarette. The campaign was meant to encourage students to make smarter decisions, but instead it offended many students of color.

“They [the Diversity Committee] probably had the best intentions in the way they presented the issue, but it was done the wrong way,” said African-American junior Lorielle Walker. “To paint a white guy’s face and then have a black guy standing next to him like ‘Yeah, this a misrepresentation of my culture,’—it’s like really? That’s the only way you thought to try talking about this?”

Ji-An Lee, the Diversity Committee Chair last school year during the campaign, did not respond for comment.

This year the campaign had one volunteer from the Hispanic community dressed in her cultural attire for Dia De Los Muertos, or Day of the Dead, surrounded by other volunteers with signs reaffirming her culture wasn’t a costume.

At the end of the day, Jonathan Glenn, assistant director of Multicultural Academic Student Services, said that cultural appropriation in any form is unacceptable.

“When you do or wear things that are appropriating a culture it shows a lack of education, because somewhere along the line you weren’t taught that doing this was disrespect,” Glenn said. “You’re taking the popularity of a culture and weaving in and out of it when it suits you, like to ‘look cool’ at a party by wearing a kimono, or putting on a Native-American headdress. The bottom line is that it’s [cultural appropriation] not okay.”