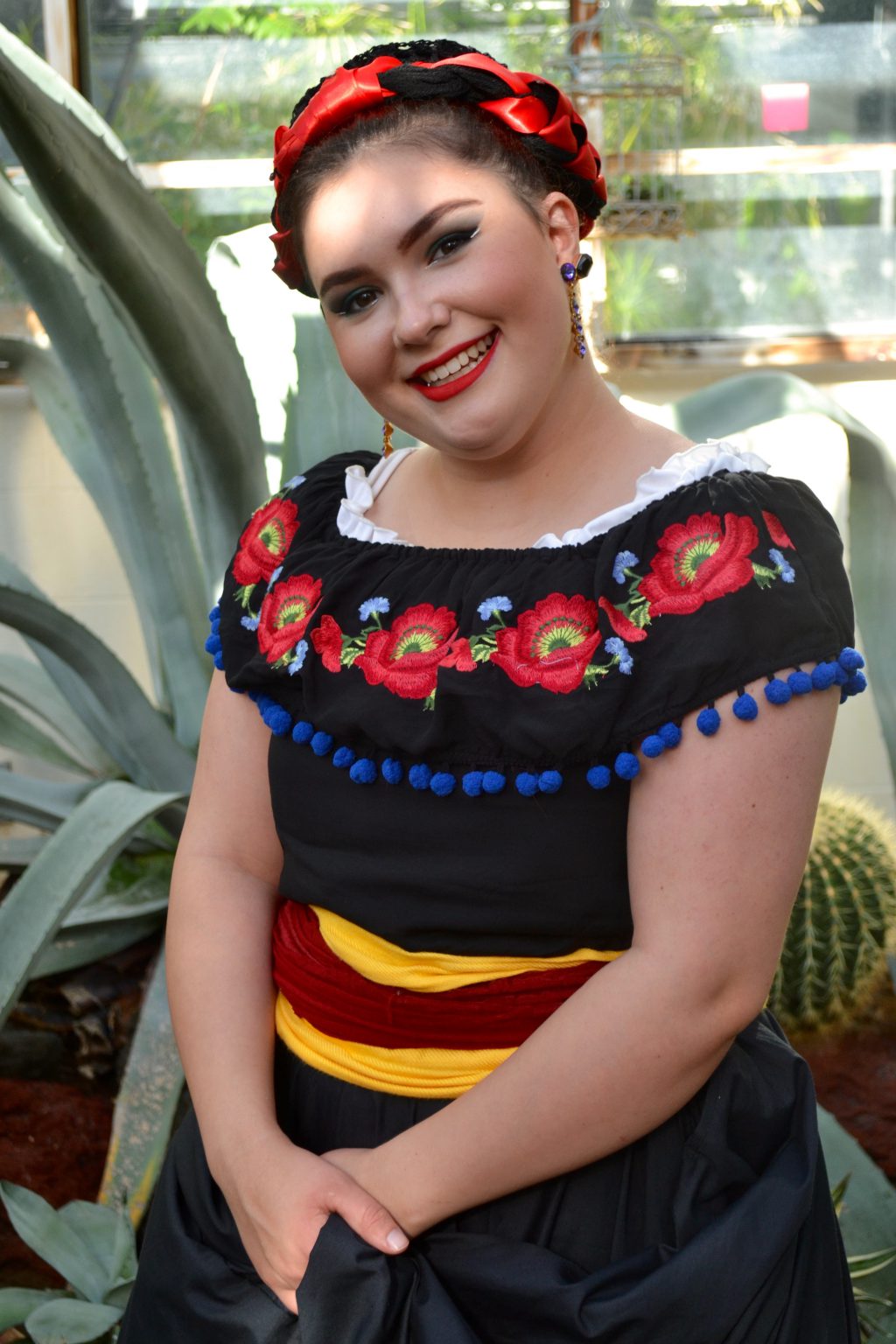 Personal style comes from an individuals’ culture, background, and taste. With thousands of students who attend Central Michigan University, there is a plethora of diverse fashion. Grand Central Magazine caught up with a CMU junior with an eye for style and a one-of-a-kind background. 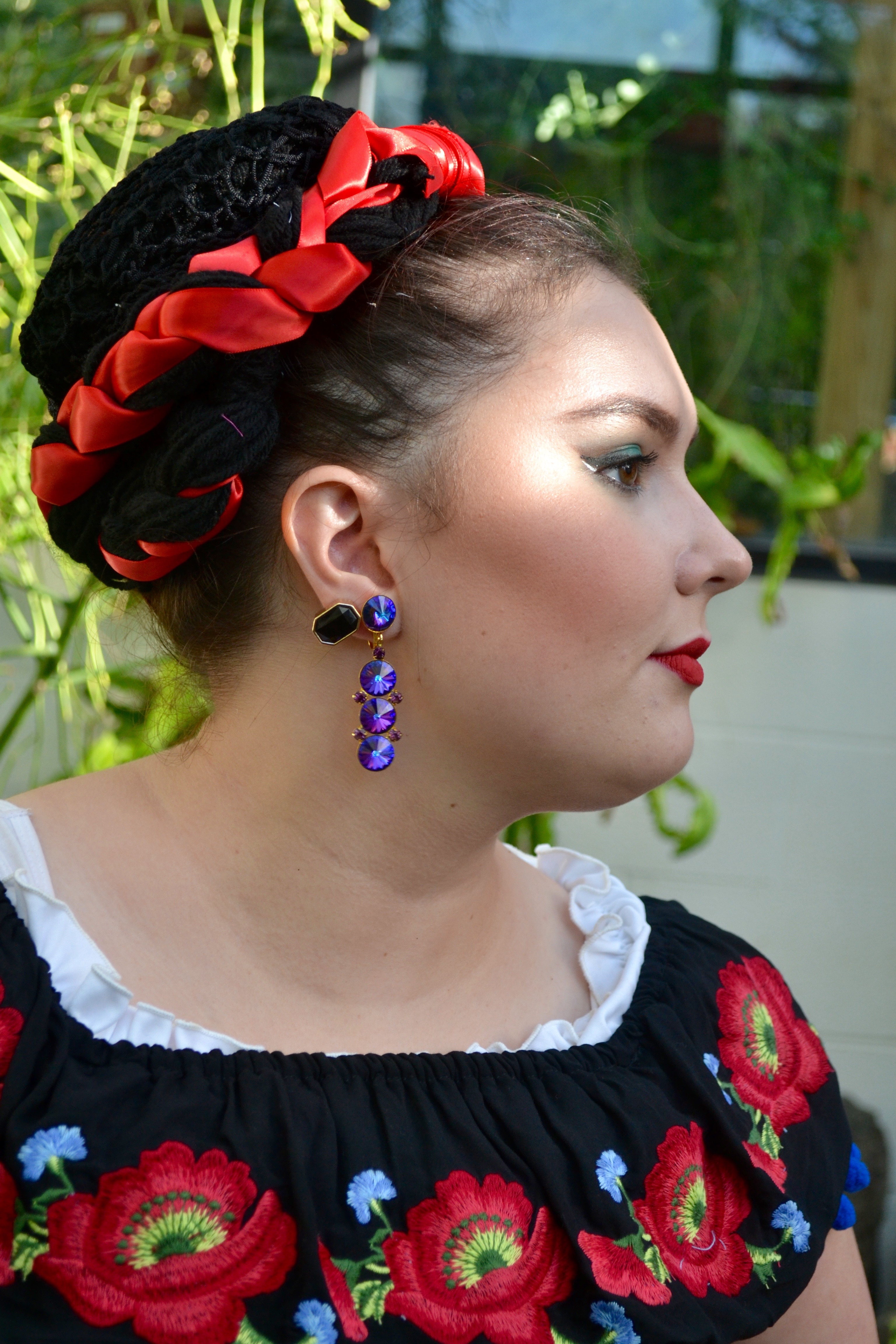 Hannah Mauch is from Ann Arbor, majoring in Spanish. She is planning on moving to Arizona to pursue her degree and become an interpreter for Spanish, English, and Portuguese for the CIA. Although she was born in the United States, she is closely linked to the Mexican-American community because of her upbringing.

Mauch’s moms best friend is Mexican, so she experienced both American and Mexican culture growing up.

“I always loved seeing the long flowy skirts and the cool embroidered tops that my friends would buy in Michoacan (Capital of México) and I always wanted to try it, but I was never really able to until this year, when I got the opportunity to do a traditional dance for my Sigma Delta Pi initiation. I really want to make it clear that I don’t wear everyday or modern Mexican clothes when I do wear these dresses, they are strictly for dancing or national holidays, or Mexican parties but only if the hosts are okay with me wearing them,” says Mauch.

Mauch has always loved long and flowy skirts. This is because she has always wanted to be a ballerina or a Disney princess as a child. However, I never wore anything Mexican growing up.

Mauch displayed three of her favorite performance outfits that are traditional to Mexican culture. According to Mauch, all of the outfits are actually called “trajes” or suits, but the English word is “outfit”.

“I feel so free and I feel like nothing can stop me. Sure I get nervous sometimes when I’m dancing, but I still feel pretty damn invincible when I wear my Mexican dresses.” 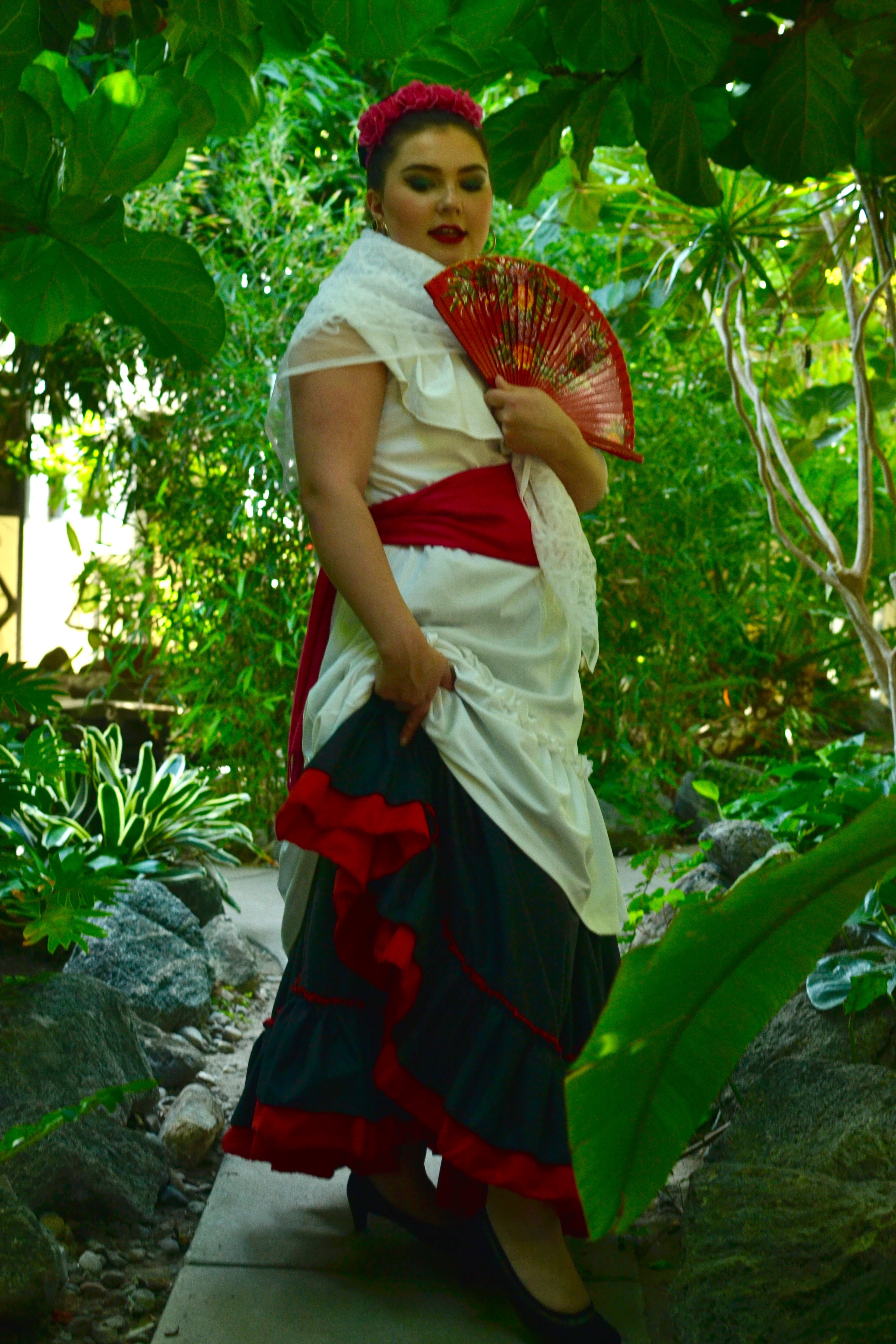 Mauch enjoys stage makeup and everyday makeup because it demands precision and definition. Red lipstick is a staple and it is one of the oldest symbols in Mexican beauty.

Mauch’s personal favorite is dark teal for her eyeshadow, because it brings out her eye color. 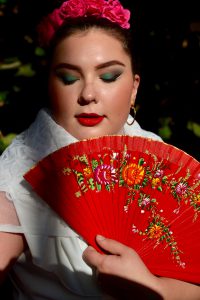 “My favorite Mexican tradition has to be folklórico dancing.” Says Mauch, “I danced when I was younger, but it doesn’t give me as much joy as putting on my folklórico dresses and head pieces and little shoes does.”

In Her Words: What They Mean

The base of it is a white dress, usually made of lace or pepiin, and it was white because in the region of Veracruz in México, the sun is hotter, so it’s better if we wear a lighter color and something that is breathable.  The style of the collar of the white dress is a peasant collar, used to show humility. The whole purpose of the region of Veracruz in the ballet folklórico is to have a party about the good harvest. The pink sash around my waist is called a “Rebozo” and it is supposed to add form to the outfit by sinching in the stomach.  Usually there is a special apron that accomponies the dress, however I chose not to wear it because I was not dancing, therefore it was not essential to the look. I also wore my long black and red trimmed “folklórico skirt” to add body to the dress, and also to give it more length. Around my shoulders I wore another Rebozo made of white lace because women in the region believe that shoulders are sacred and should be protected from the sun. 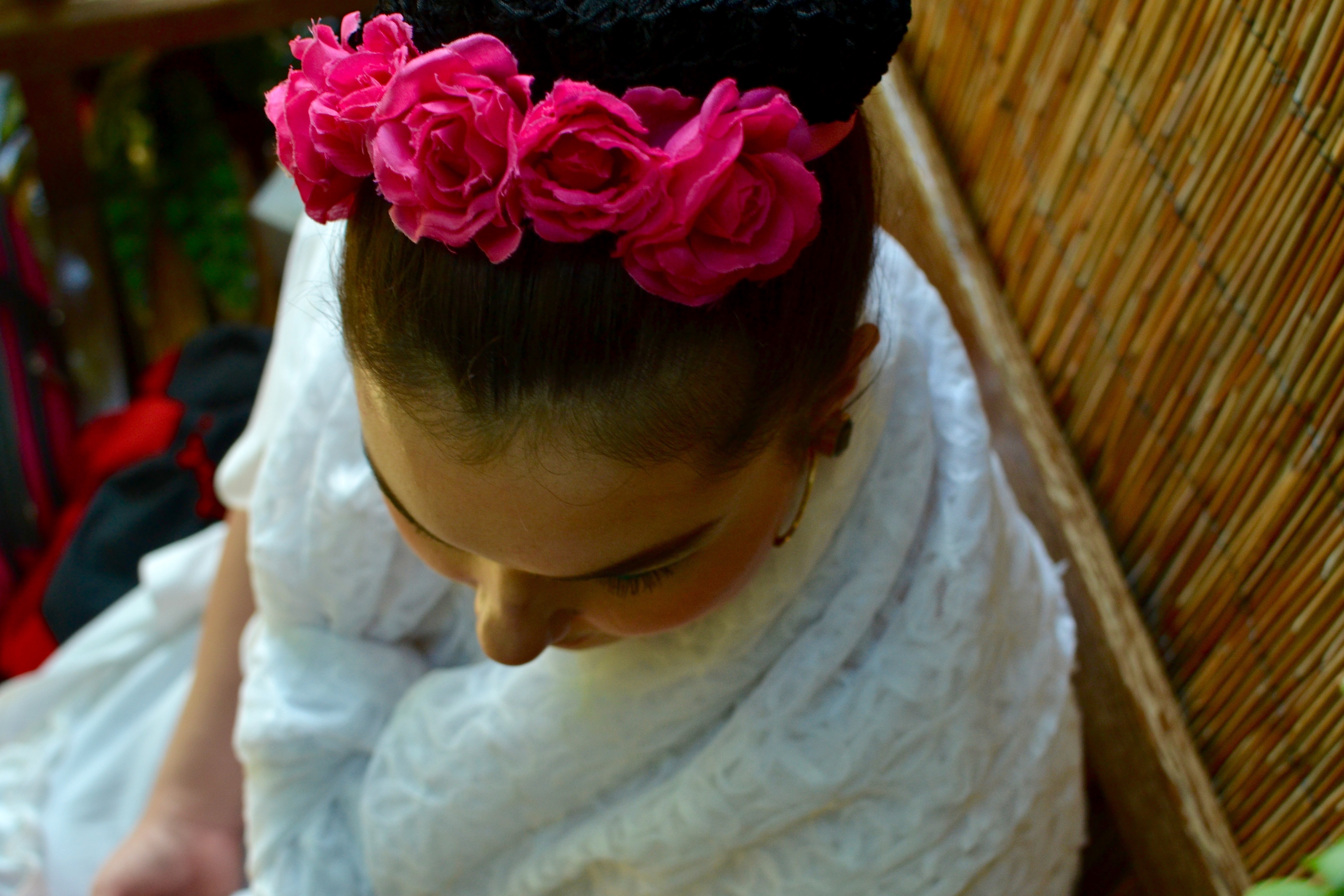 I wore a pink “corona,” or flower crown. to match the pink rebozo around my waist. I used my red wooden fan as an accessory because in Veracruz there are dances performed using a fan, and again it does get very warm over there. I chose to wear gold hoop earrings and black studs because black and gold are two very important colors from the area and they are what are traditionally is worn in Southern México.  I wore my black dance shoes because there are snakes and spiders and lizards in that region, but traditionally white shoes are worn. 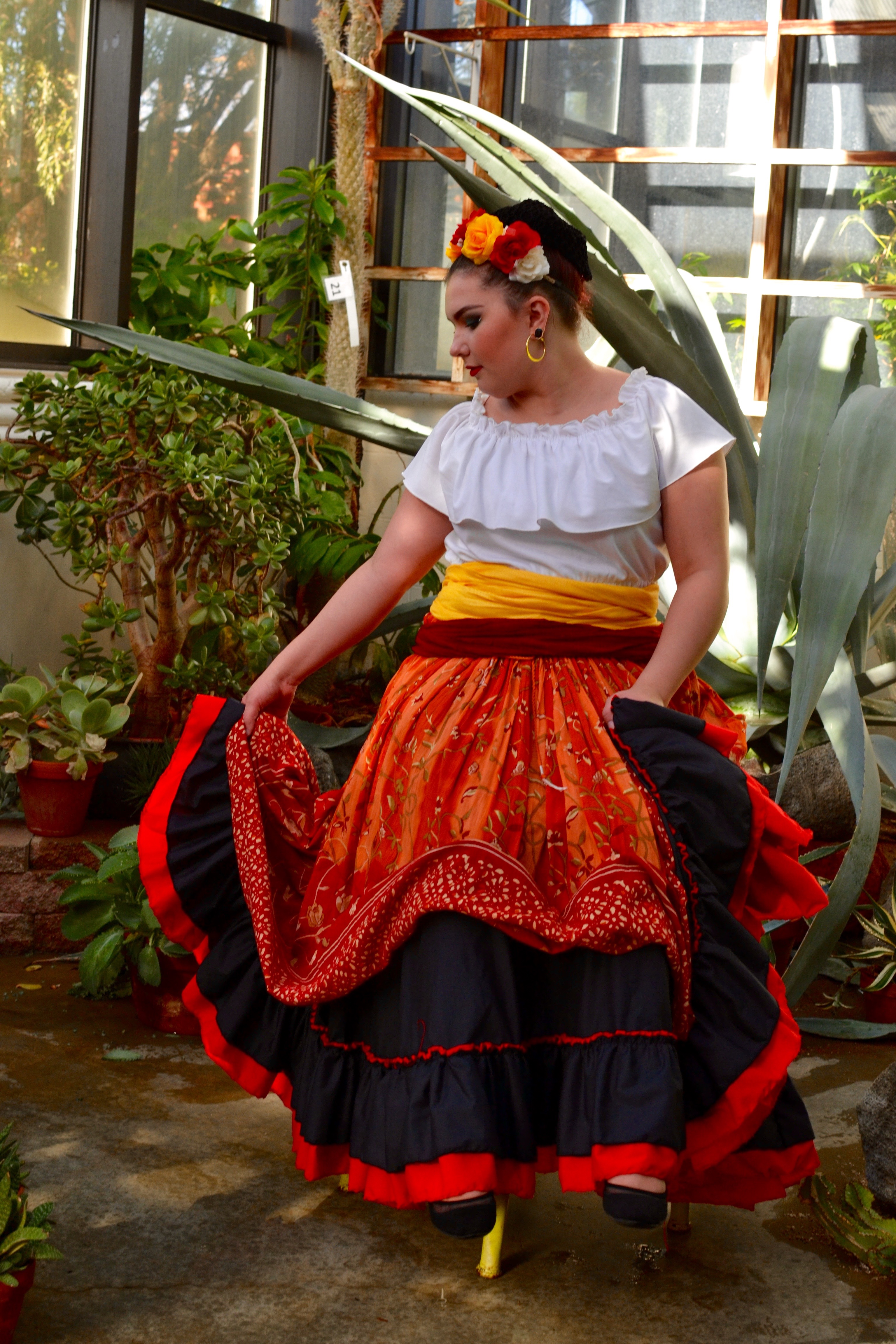 The second outfit has a similar base: the white dress with the peasant top as a blouse,  and the black folklórico skirt, but I added my orange guerrero skirt on top, as well as red and a yellow rebozo.  The skirt for this look must be full and flexible, but it is not really supposed to be held out by both arms like in other dances. 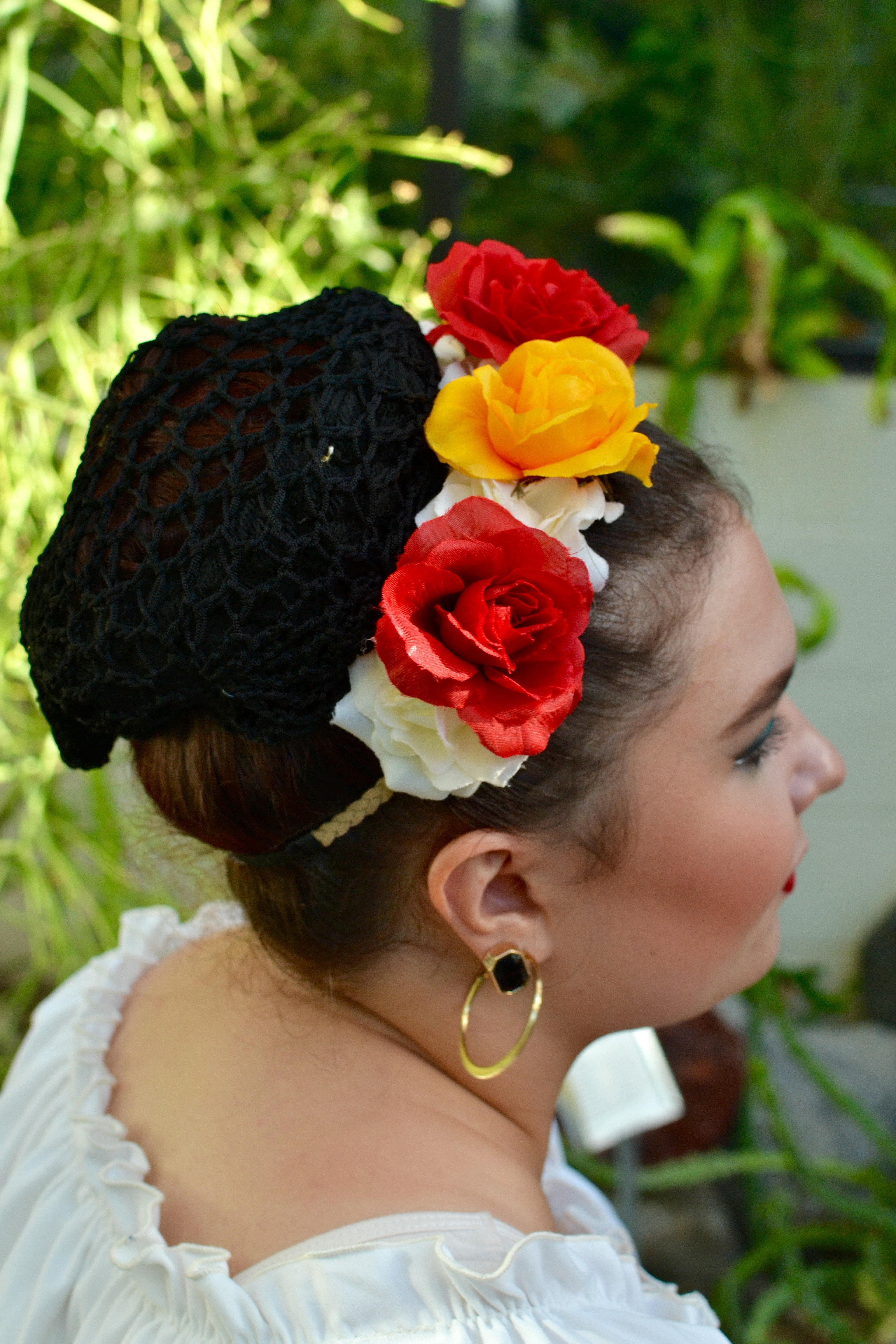 I changed my corona to the yellow, white, and red flowers because from that región they are the main colors used in dances.  My earrings are still the black studs with the gold hoops.

Black jade is commonly found in the área so that is why many people wear these kinds of earrings.  There is a song called “Amarillas y gustos de Guerrero” (Yellow flowers and likes) and the outfit I was wearing is what goes with it.  It’s one of the more traditional outfits that I have.

Traditionally speaking shoes are not worn with the outfit simply because the ground is believed to be cooler there, but some say that there can be a version of the dance done with shoes. Another important note to add is that all traditional mexican outfits are designed to create a feminine bell shape for the female body without sexualizing it. 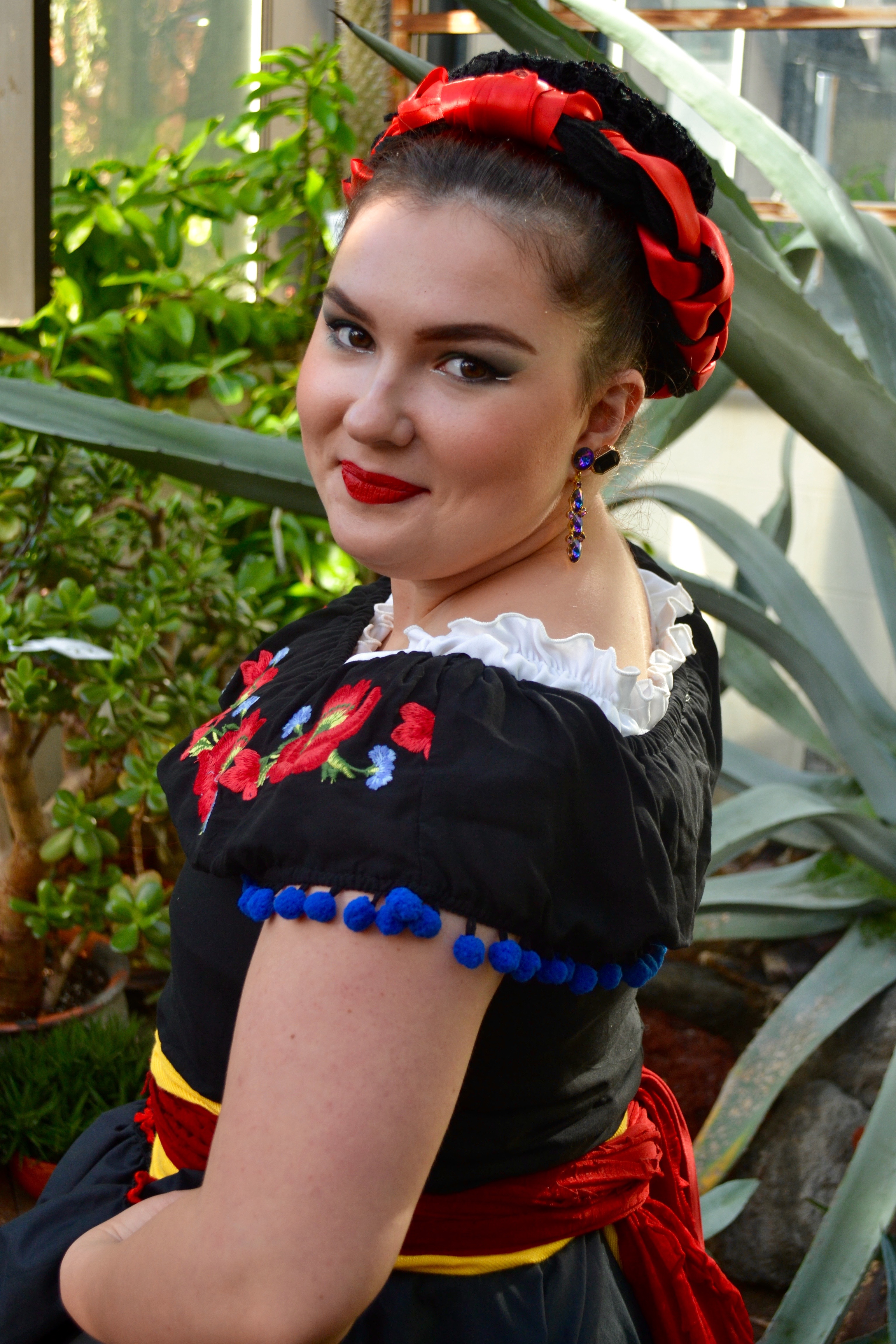 This is the most recognizable outfit. The white peasant dress is the base, as well as the black skirt, but I layered a black peasant top over my white one and kept the same Rebozos on the skirt to conceal any gaps. The skirt is essential in this look because Jalisco is one of the states that uses the skirt as a tool while dancing. It is also one of the wealthier states in México, so it is kind of a symbol of economic status. It is technically called a circle skirt because when it fans out it looks like a circle, but I just call it a folklórico skirt. 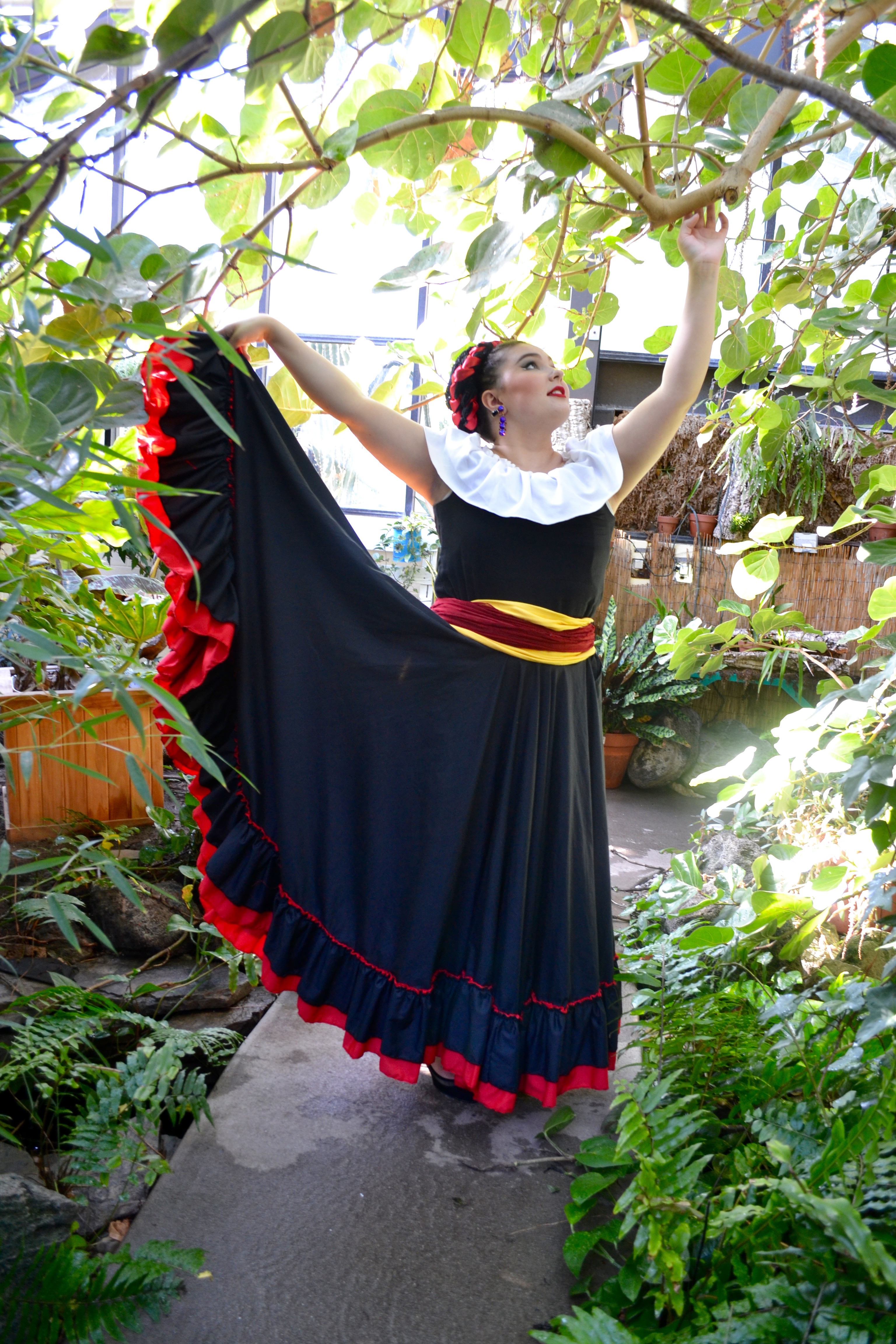 I wrapped by bun with a “trenza folklorica” or a ribbon braid because ribbons are used more than flowers in the área and it is a traditional practice to tie up long hair. I changed my earrings to the purple dangly ones because jewels are traditionally brighter in Jalisco, but I kept the black jade ones in my second piercings. I did pop up the black collar with the tassels and embroidery for the last photos because for very special occasions it is a common practice. It is my most used outfit. Of course I wore my black heels with it because traditionally black shoes are worn for the región of Jalisco.