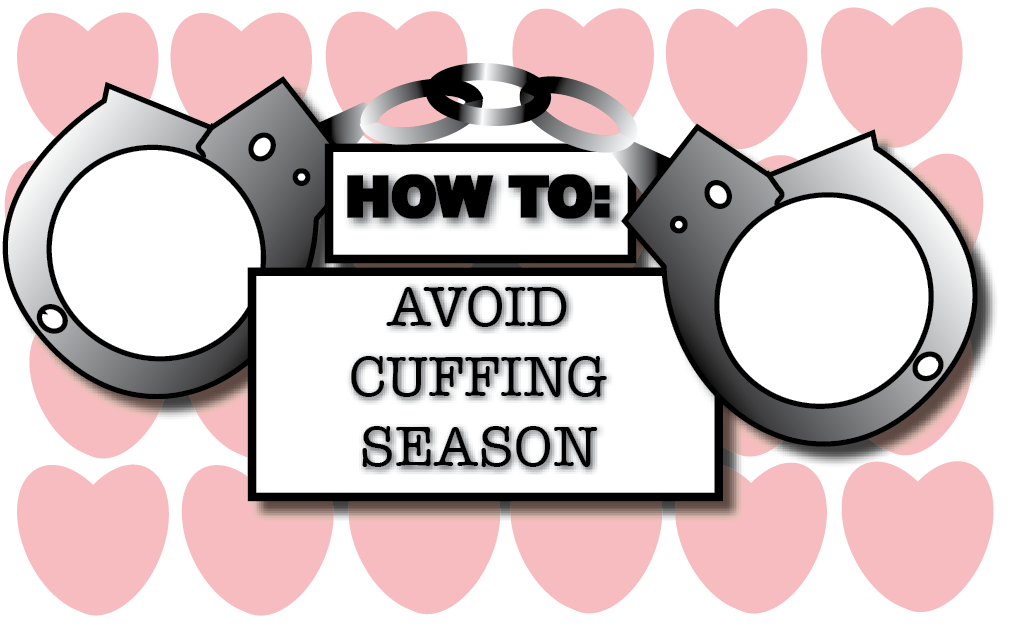 Ah yes, it’s the saddest time of year yet again. Summer warmth has faded, autumn leaves have fallen, Christmas cheer has passed and all we are left with is ice to slip on.

January and February are my two least favorite months each year without fail. Classes are back in session, there is not much to do in the freezing temperatures (especially in Mount Pleasant) and everyone is paler, fatter and grumpier.

There is not even an excuse to drink, unless of course you’re the kind of guy or gal who believes it being Tuesday is a justifiable reason.

Simply put, if hell froze over, it would be January and February.

Nonetheless, there is more than meets the eye in winter. For let it be known this season is not only known for its gray skies, but also for the many cuffs slapped onto college gals and guys.

“Cuff season,” for those who do not know, is when men and women attempt to get in a serious relationship and essentially “handcuff” their suitor during the winter season.

Unfortunately, this cuff season has become a serious epidemic among young adults from the Midwest and Northeast of the United States.

Now don’t lose all hope yet, I have come to end this virus that has plagued my generation for years. However, before I give the all-valuable antidote, I must explain why so many men and women in our great nation suffer from this infectious disease.

For starters, most students who go to cold-area colleges are generally bored during this time of year. The weekend has nothing to offer, causing men and women to binge-watch Netflix, play Call of Duty and eat stale Lay’s with salsa because they were too broke to buy quality Tortilla chips.

Since these “exciting” activities are often done alone, people become lonely. This is understandable because humans are social beings – we are wired to interact, communicate and yes, even love.

Consequently, people assume their activities would be more enjoyable with a partner, a cuddle buddy, a lover. Because of this emotionally-based assumption, they decide there is an instant need for a boyfriend or girlfriend, now!

However, just as Top Ramen noodles with tuna pales in comparison to pasta at an Italian restaurant, so does a relationship that is rushed compared to one that is established for the right reasons.

When you’re looking for a relationship, you almost always settle. Instead of naturally finding and falling for someone, you scour around the earth looking to pounce on any resemblance of human life. This scenario results in hooking up with a greasy guy at a bar or locking lips with a girl that turns out to have an annoying laugh.

Like falling dominos, this romantic exchange causes numbers to be exchanged, dates to be made and relationships to be forced. Fast forward five weeks later and you’re wondering how the hell you became attached with a pig and when you can escape this Alcatraz of a relationship. Like c’mon, he leaves old bottles filled with dip spit on your nice coffee table!

So, in order to avoid this waterfall of regret, I have one simple answer: don’t get bored. Really, that’s it.

Instead of watching hours of TV shows and movies, join a group on campus. Be productive and accomplish something you’ve always wanted to. Learn Japanese, go snowboarding or read a book. Fulfill your need of social interaction and go to a bar with friends. Do whatever you have to do to stay occupied and social.

No, I am not a couple hater. I’m just a cool dude who doesn’t want people to settle.

Live up to your potential and find someone that is sincerely right for you. Take it slow, find out who they really are and don’t force it. Be with someone you truly love, not “kinda” like.

So when Valentine’s Day rolls around and you see your roommate getting cheap, wrinkled flowers from her boyfriend, keep your chin up and feel relieved because your future someone will know you prefer chocolates instead.