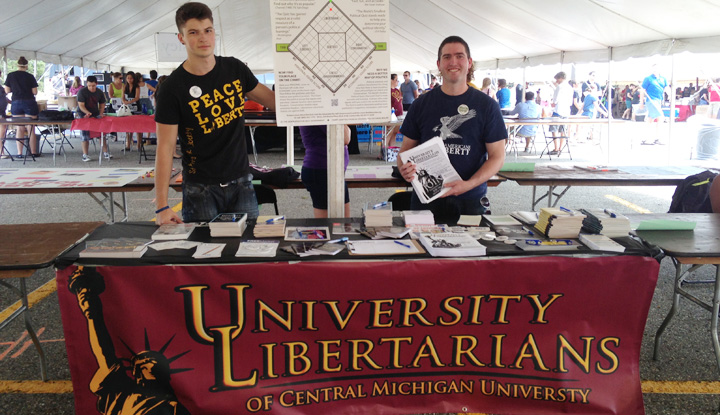 Some think of political meetings as tense discussions with rigid atmospheres, but the University Libertarians, a registered student organization, is as laid back as any other club at Central Michigan University.

The meeting consisted of members discussing various political issues, the president playing a YouTube clip from “The Newsroom,” reading Dr. Seuss’ “Yertle the Turtle” and explaining techniques to recruit members.

Sophomore Ty Hicks started the organization after initially joining the Central Republicans, but realizing his views differed from the group’s ideology.

“I came here as a first year freshman, knowing I was a Libertarian and wanted to be politically active, so I joined the College Republicans, but I found out that their message and activities were not aligned with what I wanted for myself,” Hicks said.

After this discovery, Hicks decided to build the University Libertarians with the help of other students.

Hicks said he is sympathetic toward people who are not familiar with Libertarianism.

“I describe it simply as allowing individuals to have the right to live any way they choose so long as they don’t infringe on the rights of others,” Hicks said. “In other words, the government should not get involved in an individual’s right as long as they do not overstep their bounds and infringe on anyone’s unalienable rights.”

Junior Christian Conley, treasurer of the organization, said  he has identified as a Libertarian since high school. Conley said he is attracted to Libertarianism because of the strong stance on personal freedom.

“I like the idea of being an individual,” Conley said.  “I don’t like people telling me what I can and can’t do. That really attracts me to (Libertarianism).”

During the last school year, the University Libertarians hosted an essay contest based on the cost of the Iraq and Afghanistan wars and the how to respond to the threat of terrorism.

“Each week, members will be giving their own presentations on different topics, from the environment to monetary policies,” Hicks said.  “So that’s how we plan to grow the group, intellectually. We also plan on having activism events such as the Free Speech Wall in October and the event about the Federal Reserve.”

Events the organization has planned for this year are debates with the College Democrats and College Republicans in January and bringing four speakers to campus.

Harry Veryser, an Austrian Economist and author of “It Didn’t Have to Be This Way: Why Boom and Bust Is Unnecessary-and How the Austrian School of Economics Breaks the Cycle,” will be the first guest speaker. He will be visiting Central at 7:30 p.m. on Monday, Sept. 23 in Anspach 260.

Sophomore Alexis Truscott, serving as the Parliamentarian and Student Government Association representative, said she used to identify as an Independent.

“I never identified with either party, I was that apathetic person who didn’t care about politics,” Truscott said.  “Over time, I became more open to the idea.  By the time Ty talked to me about the liberty movement, it really pulled me in.”

Hicks, himself, was not always a Libertarian.

“I consider myself a recovering socialist,” Hicks said.  “When I was in high school, I became politically active and conscientious. I wanted to see a totalitarian state, completely controlling and regulating commerce.  Now I understand that commerce is essential for humans to flourish.”

Hicks said one way Libertarian philosophy can help college students is their belief that the government should be removed from public education.

“I, as most Libertarians, believe in the privatizing of education, which has historically shown not only to improve the quality of education, but the cost of education because it is then freely exchangeable in the market,” Hicks said.

“It’s not that Libertarians particularly condone individuals using those substances,” Hicks said.  “We do condone being able to have the rights to those recreationally, if they chose to and they choose to responsibly.”

Hicks said students should check out the University Libertarians because they might have Libertarian ideals and not even realize it.

“Statistically, students find themselves on the side of Libertarianism, even though most of them don’t know what Libertarianism means or what we stand for,” he said.  “They can find a lot of common ground and similarities with our organization. Thus, they will find a place of belonging.”