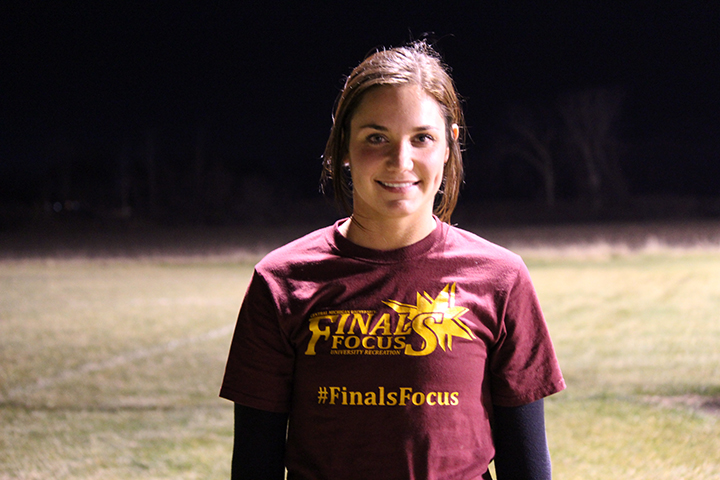 For senior and exercise science major Hannah Gonzalez, sports have has always been more than a hobby – they’re a passion.

This passion has not only fostered great athletic ability, but a path to her ideal career.

“Being involved in athletics and personal fitness my entire life made me realize a profession in health care was right for me,” Gonzalez said. “In the long run, I hope to work in an operating room for a cardiac surgeon.”

Gonzalez is not shy when it comes to participating in sports on campus. She has been playing intramural sports all four years she has been at Central Michigan University. She’s played dodgeball, volleyball, but of all sports the she loves, intramural soccer has always been number one.

“I like that I am able to play in a CoRec league, so I can play with all of my friends,” Gonzalez said. “I have played soccer my entire life up until college, so being able to still do that once or twice a week with others that also miss the game is a lot of fun.”

Gonzalez has played both indoor and outdoor soccer every season it’s been available. When she heard about some of her friends putting together a team for the outdoor season, she didn’t hesitate to join.

The outdoor soccer team she was on was a collection of friends who she’s played with on previous teams over the past few years, as well as some new additions and friends who are trying soccer for the first time.

“Our double headers went great.” Gonzalez said. “We played well together and ended up with two wins. I think the fact that we are all friends makes it easier to be successful on the field.”

Gonzalez prefers CoRec to the all-female soccer leagues because, in her opinion, playing in this league allows for a much faster-paced game. Not to mention the fact that she gets a chance to one-up all of her male friends.

As far as game time, Gonzalez has never seen playing intramural sports as giving up leisure time. For her, sports equates to leisure.

Although there are many more memories to come playing intramural sports in the time she has left at CMU, Gonzalez’s favorite part of these sports isn’t a victory (even though that doesn’t hurt), but instead, something deeper.

“I’m a very competitive person, so that aspect of playing makes things so much fun.” Gonzalez said. “But being able to have fun with my friends and play a sport I’ve always enjoyed is the best part about it.”