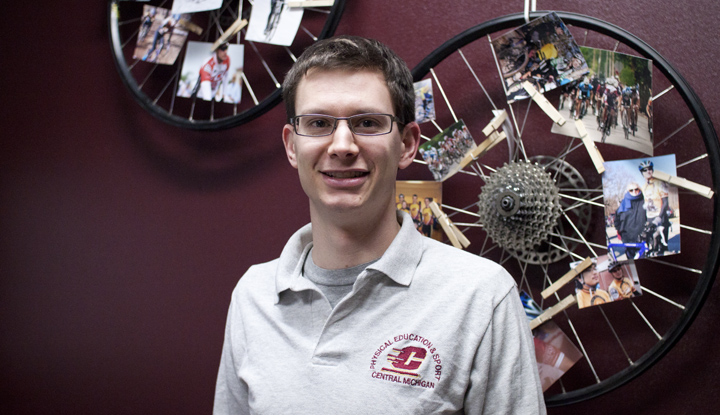 This event, held during the month of June for the last five years, is the only bicycle race held past Frankenmuth.

Ben Rollenhagen, coordinator of PED sports skill instruction program at Central Michigan University, has been an avid participant in the competition since 2010. He won a sprint race in 2012, proudly displaying a picture on his office wall.

This year he was asked by the events coordinator, Lisa Hadden, to serve as a co-race director. This position is tasked with overseeing events for all three days of the event with law enforcement and medical services in Isabella County.

Though he does not hold any experience in planning events like these, Hadden hand-picked Rollenhagen.

“It’s also the largest competition in the state [for biking],” Hadden said. “Last year we had 300-400 people participate in all different races and time trial competitions.”

Races run Friday through Sunday and cover 50 to 110 different miles, a unique aspect for an event according to Rollenhagen.

Different events are held each day in multiple locations.

Friday is a time trial that starts and ends at the Student Activity Center. Saturday is a course set downtown that begins on Broadway and ends at Franklin Street. A small kids race is also held where children can participate with their trikes or bicycles, with training wheels encouraged.  Sunday’s competitions include division races with Men’s Pro Division 1 and 2 racing 110 miles around the county, along with nine other races that cover 46 miles.

Kevin Daum, a past participant, said he really enjoys participating in the event.  Daum has taken part three times and looks to make it four this summer.

“I missed last year’s criterium on Sunday, which I heard they updated the course,” Daum said.  “I look forward to seeing the new course this year.”

Such a large event like Le Tour de Mont Pleasant requires extensive planning and fund raising, which usually starts in December, though plans for the next year begin immediately following the conclusion of the event.

The expenses range from tents for registration to marketing.

“We have to pay at least 10 U.S.A. cycling officials to come in and officiate for us for the weekend,” Hadden said. “That is very expensive.”

The help from local businesses around Mount Pleasant makes a difference. Stores like Kroger and Meijer donate food, water, and supplies. The city, county, and state police aid in street barricades, re-routing and directing traffic. Fields Neuroscience donates helmets to kids as well.

Volunteers for the events are always needed and most come from the surrounding area and businesses, as well as Central Michigan students.

“For the last several years we have averaged around 510 volunteers,” Hadden said. “[This year] we expect to recruit the same amount, over 500.”

Though there is a lot of support from the community, Rollenhagen says that businesses downtown are less than thrilled when that weekend in June comes rolling around.

“Most of the complaints we hear are about how the competition blocks the flow of traffic for businesses and that their sales are down,” Rollenhagen said. “It’s disappointing that something that has such a large impact on the community isn’t really supported by that portion of the community.”

Though there is friction between the downtown business community and the event, families and racers come from all across the Midwest and even Canada to witness or participate in the race.

“It is a great venue, the races are challenging and they like coming to this community,” Hadden said.

The appeal toward kids and family is something valuable for the future of the event.

“We hope that as the kids get older, that they’ll come and do more than just watch, that they’ll volunteer or even enter the race,” Rollenhagen said.

With the sixth annual Le Tour de Mont Pleasant set for June 6-8, much planning is still needed to be done.

“It is a very complex event with many layers,” Hadden said.

The event will also donate any proceeds to the newly organized Mid-Michigan Cycling Club. Their goal is to teach safety to others about cycling, organize group routes, and encourage others to get active with cycling.