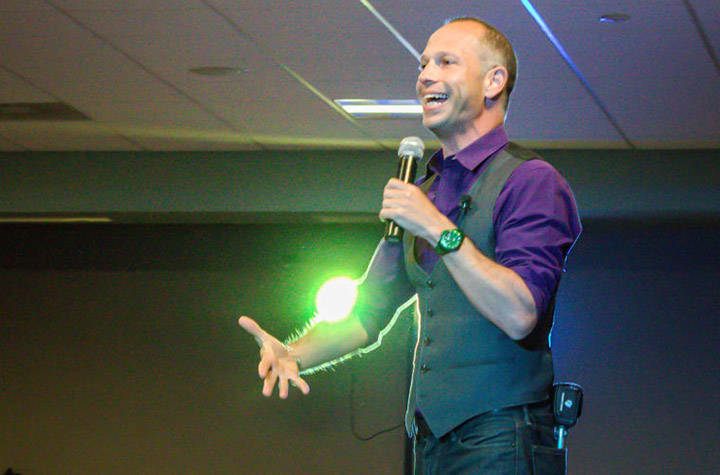 Rolling laughter, chanting and grunting erupted through the walls of the University Center Rotunda  during the “Live Sex Therapy” presentation given by life coach Daniel Packard.

The advertisement of the event emphasized the “sex therapy,” but focused on how to find love and how to love one’s self. To acquire love, Packard said there were two keys. The first is to be yourself.

“You gotta be you,” Packard said. “Be completely authentic.”

The second way to be successful in love is one must be open to love.

Packard shared the ups and downs of his self esteem, relationships, and childhood with the audience during the course of the event.

Native from California, Packard said he grew up with the belief that everyone he has met has dealt with the feeling of not being good enough.

“You are enough,” Packard said.

This chant was repeated by the audience throughout the hour and a half presentation.

Though the basis of his talk held a great amount of humor, Packard was not afraid to switch gears into a serious mood when talking about self-worth.

“If we are so right, why aren’t things working better for us?” Packard asked the audience.

Before entering the event, students filled out a slip of paper with two questions. He read the answers aloud to the audience at the end of the event. During his presentation, he invited a student on stage who had a less than stellar view of her appearance. He encouraged her to step out of her comfort zone by dancing and laughing.

Later on, a man who described himself as shy came forth and through a little coaching and some deep grunts between him and Packard, he shouted an honest compliment to a woman in the audience, which was met with cheers and applause.

Through the demonstrations, Packard helped to highlight the difference between men and women and how the thinking process of the genders were not all that different.

“Neither of you has secret plans,” Packard said. “You will never get anywhere if you try to figure the other out. There’s nothing to figure out.”

Packard held nothing back when talking honestly about himself and the way he used to think negatively of himself. He even admitted that he is often mistaken as homosexual. He embraces it with humor.

“I’m straight even if you don’t believe me,” Packard said. “I call my style ‘gay matador.’”

He also encouraged the audience to laugh at themselves and their own negative way of thinking by impersonations of how men and women think.

From texting explicit thoughts about love and dating to a poll projected on screen, yelling out sexual fantasies and confronting negative perceptions of one’s appearance, students laughed and embraced the high energy event.

Junior Alanya Noresang sat with a few of her friends and said she was laughing the entire way through.

“It was definitely not what I expected,” Noresang said. “There were a few moments that cut deep and a few where I couldn’t breathe because I was laughing so hard.”

Noresang  said she did not have the courage to come completely out of her comfort zone, but still learned a lot about herself.

Sophomore Sarah Vollmer also felt like she learned more about herself, but really enjoyed the event.

“[Packard] was super energetic and it made the truths he spoke a lot easier to swallow,” Vollmer said.