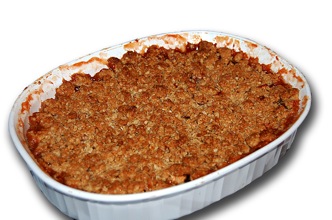 Martha and Me: Apple Crisp

Fall is just around the corner and while it is my favorite season, I am not ready for summer to be over! That being said,  I thought perhaps with a little apple crisp baking in the oven to make the house smell of cinnamon, it might prepare me for the colder weather ahead and maybe motivate you, too.

This recipe is a standard apple crisp recipe but I was excited to make it. I live in Berkley, Mich. and it takes me 20 minutes to get to the Eastern Market in Detroit, but I love going down on Saturdays and seeing what they have to offer.  This market has great prices and you can find pretty much everything you need for this recipe and countless others.

Today I was looking for apples. After walking around the market and spending money on other things I found some amazing, bright red, make-your-mouth-water, Gala apples .  I bought three pounds for two dollars, and I could not get home fast enough to start the apple crisp!

Preparing this apple crisp was easy as could be and you end up with a delicious desert! I mixed the first couple ingredients together and just used my hands to cut the butter in.

I know that the heat of your hands can make the butter melt but I am impatient and did it quickly.  While I was doing the first step I had my boyfriend do the dirty work and peel and cut the apples.

This job is much easier if you have an apple slicer because it is important that all the apple slices are the same size so they bake evenly.  Martha Stewart suggested ½ inch chunks but I found those to be a little big and cut them into smaller chunks. I also added a little more brown sugar because I am that girl who steals spoonfuls when no one is looking; I am a fan of brown sugar. The topping came together great and there was just enough to fit on top of all the apples. It was a hard 55 minutes but when the crisp came out of the oven it was bubbling and smelt of fall. It was time to dig in.

The apple crisp was warm and of course there was vanilla ice cream next to it on the plate. However, there are two things I would change. The Gala apples were a little too sweet for this desert. Unfortunately Gala apples were the only ones suggested that I found at the market but next time I would try to use a combination of sweet and tart apples to add a little different taste.

In addition to switching apples, I would also add more cinnamon next time. I did not really get much of a cinnamon taste from the desert and cinnamon is an important spice for fall. With those two changes this desert would be even better than it already is.

I had five people taste the apple crisp and rate it on a scale of one-to-five- one being the lowest five being the highest- on overall taste, texture, appearance, quality, and willingness to try making recipe. I also had them make comments on what they would change about the apple crisp.

Some comments I received about this recipe was to use less sweet apples, more cinnamon and brown sugar. Overall this was a classic fall recipe and with changes this desert will be made a couple more times this fall and winter.