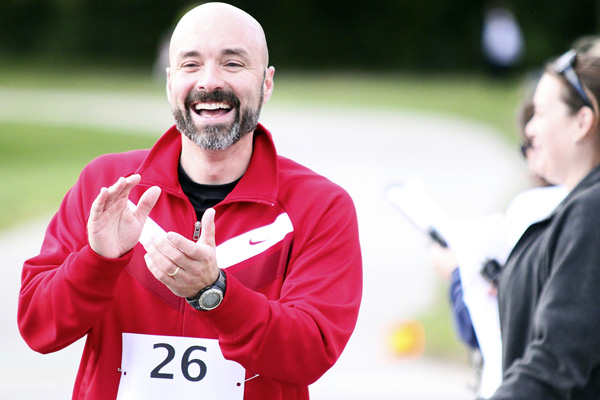 Nearly 80 area runners and local supporters were out early on a crisp Saturday morning participating or volunteering in the first annual 5K event hosted by Michigan Spine and Pain.

Proceeds from the event went to three different organizations (one national and two local). Girls on the Run, a national organization, promotes healthy lifestyles for pre-teen girls. Partners Empowering All Kids (P.E.A.K.) is a local organization dealing with after school and summer time recreational activities.

Mount Pleasant Sports Boosters is the other local organization receiving some help from the proceeds of the race.
Bethany Erving of Michigan Spine and Pain pointed out that funding is a growing concern in the Mount Pleasant area and that the goal of the 5K is to elevate that concern.

“Sports are being becoming increasingly expensive to play,” Erving said. “And we don’t want our area to lose participation due to lack of funding.”

Weather may have slowed the times of the 5K runners down but it did not stop the electric moods of the participants. The overall best time from the 5K was Corey Friedrich from the Mount Pleasant who is a very active runner and crossed the finish line at 18:30.

“I try and do at least one 5K a month,” Friedrich said.

This event attracted people of all different ages and genders. Shaun Biehl who just started running a year ago was a participant in the 5K. Biehl has done four 5Ks this year so far and discovered the event through his wife who works with Michigan Spine and Pain.

“The event turned out great for it being the first year and being on such short notice,”  Biehl said.

Garia Arnold, one of the organizers of the event, is optimistic about this event for next year.

“For the first year, I feel this event very well,” Arnold said. “We were shooting for 100 but we feel good about the turnout.”

As of now, Michigan Spine and Pain is planning on another event taking place next year and feels there will be a great increase in participation.