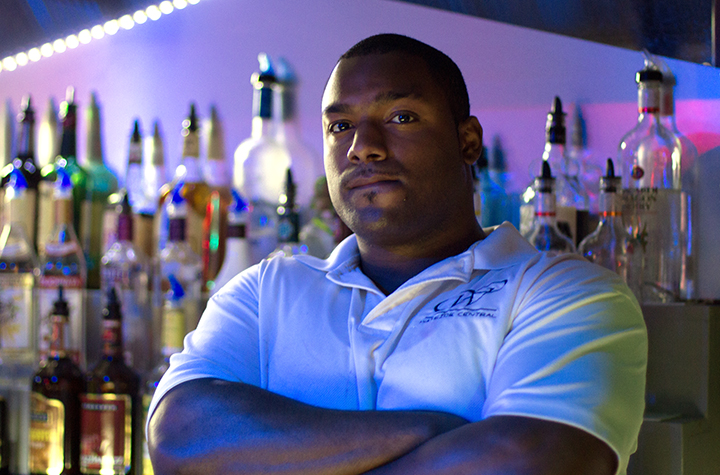 From pint night on Tuesdays to ladies’ night on Fridays, Wayside Central  draws attention to many party goers in Mount Pleasant.

Having music, drinks and a large amount of people in one area, tensions flare causing bouncers to step in and control the situation.

Mikhail Prince, Detroit native and senior at Central Michigan, with his 6’3″, 240-pound stature spends his nights as a bouncer at Wayside Central. His physical physique, along with his relentless work ethic can be intimidating to guests at the club, making them think twice about causing havoc.

Prince can be spotted in the VIP section, back bar area, and walking around surveying the dance floor, making sure everything is going smoothly and guests are having a good time.

“Tuesdays and Fridays are the most craziest,” Prince said. “Coming back from [school] breaks and going on breaks is when it gets really packed.”

Wayside gets crowded when celebrities such as Chanel Westcoast and Brody Jenner are in attendance. It makes Prince and his co-workers’ job much more difficult as they try to keep everything under control. From individuals climbing on the top beams to people jawing at guests, at times it can become a pretty hostile environment.

Prince is always prepared for the worst when he knows it’s going to be a busy night at Wayside.

Junior Alison Goldsmith said she notices Prince when she goes to Wayside Central and believes he can be quite intimidating when he is walking around and observing the scenery.

“He’s a really big guy,” Goldsmith said. “I’m not the type that causes trouble but if I were, I wouldn’t do it when he’s around.”

Prince enjoys the time he spends at Wayside, working four days per week at the club.

“It’s pretty cool being able to work here,” Prince said. “Getting girls’ numbers is always a plus along with getting 25 percent off on food. You can’t beat that.”

Trevor Vosmik, senior and also a bouncer at Wayside, raves about how he enjoys having Prince as a co-worker and the command of respect he gets from guests.

“I love working alongside of him because he’s such a good guy who is respected by all,” Vosmik said. “When they see him coming around, they try to stop what they are doing if they are doing something bad.”

To most, Wayside Central is just a place to dance and have fun, but for Prince and his co-workers it is a job they take seriously. While Prince’s classmates have a good time on the dance floor, he has to watch for any disturbances in the crowd.

“I worked with [Prince] before and it amazes me, the commitment that he puts into what he does,” Stewart said. “He does a good job in keeping things in order.”