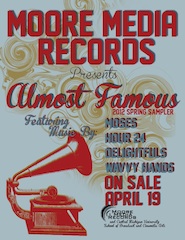 Michigan natives Hour 24 were the first performers of the evening. Lead singer Rachel Mayer described their music as “high-energy rock” and cited Avenged Sevenfold as the band’s primary influence. The band screams high school with songs named “Escape From Reality,”“Love Sick” and “Denial.” Musically their set wasn’t too bad, but the vocals are lacking. They could be described as emo or alternative rock, very similar to Paramore.
Wavvy Hands also performed at the bar, but its set was disappointing. The music had an Owl City vibe, but all of the songs seemed to have the same beat. Singer Andrew Kauervane and synth player Corey Densmore offered little to the crowd and seemed almost boring after the loud set from Hour 24.

Rubble’s had a steady stream of people throughout the night, but the place was packed when Moses began to perform. The folk rock group from Mount Pleasant played a great set that can only be described as loud. Background mandolin and banjo give the band an Arcade Fire feel, but without those instruments they would probably be considered punk. They played songs like “Huron” and “Salt Lake” and their harmonies were great, especially for a young band performing live.
Almost Famous is Moore Media Records’s Spring 2012 sampler CD and features songs from all of the artists above and another band, Delightfuls. The album’s four artists are a mix of diverse alternative rock. Highlights include Delightfuls’ “Eventually the Past is Present” and “Huron” by Moses. For a group of relatively inexperienced bands the album is pretty solid. It will appeal to a variety of music lovers. Anyone looking to hear some local talent should check it out. Copies of Almost Famous are available in the BCA office in Moore Hall.