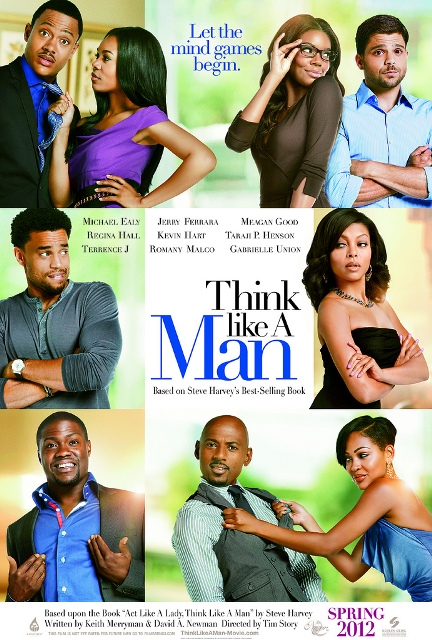 If you have a fear of going to see a movie lately, fear no more. Think Like A Man is a comical, romantic, sweet and not your average chick flick. I’ll have to admit it definitely makes one of the top 10 movies of 2012.

The movie opened in theaters April 20 across the nation, becoming number one at the box office while knocking The Hunger Games out of the winner’s seat. The movie production team didn’t think this film would bring in such revenue but with much marketing and praise surrounding it, it’s no surprise it accrued $33 million in its opening weekend.

The film was directed by Tim Story, who is best known for Barbershop, Fantastic Four and  Taxi.

The movie featured an all-star cast including Oscar nominated actress Taraji P. Henson, Meagan Good, Regina Hall, comedian Kevin Hart, Terrence Jenkins, Michael Ealy, Gabrielle Union, Morris Chestnut and the mastermind that started it all — Steve Harvey, comedian and author of the bestselling book Act like a Lady, Think like a Man. This movie was an adaptation of Harvey’s book that discusses love, relationships, intimacy and commitment.

It’s the boy meets girl, boy dates girl, breakup then make up. Nevertheless, the riveting cast keeps your eyes glued to the screen with nonstop laughter and truly ‘aw’ moments. Specifically, throughout the movie we see each character experience the high and lows of learning how to really love. The characters are so relatable and personal to the point I even saw myself in many of their actions.

The movie is narrated by newly divorced Cedric (Hart), who tells how the ride of love becomes a mind game once the characters get a hold of Steve Harvey’s book. Cedric’s friend Michael (Terrance J), a “mama’s boy,” meets single mom Candace (Hall), who is friends with Lauren (Henson), a driven executive who wants a man who makes six-figures. She surprisingly falls for an upcoming chef named Dominic (Ealy) who doesn’t earn much but wants to prove that love can reign over all. Then there is Zeke (Malco), a player who doesn’t believe in love until he meets Mya (Good), who is protecting her heart by using a 90-day rule to refrain from having sex. Cedric’s other friend Jeremy (Jerry Ferrara), hasn’t committed to his long-time girlfriend Kristen (Union) who wants commitment and for her boyfriend to ‘act like a man.’

Can these men step up to the plate and be the ladies’ true love?

Well I guess you’ll have to find out and see.

Don’t take my word for it — what do you seriously have to lose? Get out of the house, take a friend or go alone if you want but make sure you get to a theater near you fast. This movie is a feel-good story that doesn’t miss a beat.