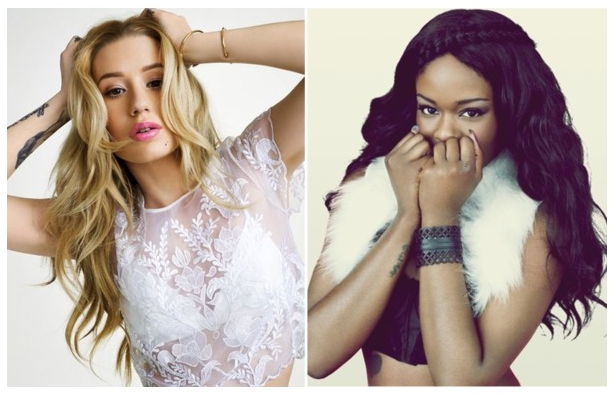 The use of social media has become a marketplace where musicians can share their music and establish their credibility as artists. It has also become a battle ring where 140 characters can be used as jabs, uppercuts and roundhouse kicks.

Celebrities from Lil Wayne to Katy Perry have had their own taste of Twitter drama, whether it’s through shade-throwing via “subtweets” or through direct messages. However, it seems that no celebrities have used Twitter for confrontations more than Azealia Banks and Iggy Azalea.

Azealia Banks, a rapper from Harlem, New York, has been described as outspoken and aggressive on Twitter in recent months for sharing her views on Grammy-nominated Australian rapper Iggy Azalea and her position within the hip-hop music genre.

Banks feels that as a powerful figure in music, Azaela should be doing more to help African Americans, especially in light of Ferguson and the Trayvon Martin case. Azalea, on the other hand, believes that she has no say in the issue and has distanced herself from it entirely.

Banks also believes that Azalea is misappropriating hip-hop and bases this on the argument that Azalea fakes a “ghetto” accent and pretends to be someone she’s not.

Though this seems like a faulty claim by Banks, Azalea has had the tone and sound of her voice brought up several times and people have accused her of having a separate rapping and speaking voice. Some people have even claimed that Azalea has used the very essence of hip-hop as a way to make a quick buck with little respect for the genre and what it represents.

These issues have been the driving force for a troubled Banks to lash out against Azaela and any of her supporters, whether it’s via radio shows or television interviews. Though the interviews essentially make Banks look hateful and ignorant, there may be a little truth behind what she has to say about Azalea.

Although many are not big supporters of Azalea, surely they understand why she’s popular. She’s gorgeous, has collaborated with some of the biggest names in the music industry, has several number one hits – but there’s also the argument that her actions can rub someone the wrong way. Based on her presence in the media, she can be labeled by some as having a phony bad girl façade.

Some will say that she’s not hip-hop, but honestly, is anyone strictly hip-hop anymore? Genres of music might be being blended, but that is creating amazing musical collaborations (i.e. Kayne West, Rihanna and Sir Paul McCartney). Where Azalea is in the wrong is the fact that she has not given support to the community in which her music is representative of.

That being said, Azalea shouldn’t be forced to march down to participate in a protest, but she should be aware of these situations and the way that affects her audience, because an essential part of music is learning who you are cultivating your craft for.

Hopefully, the feud between these two performers will subside, allowing them to turn this negative energy into a creative force that can better music industry as a whole.