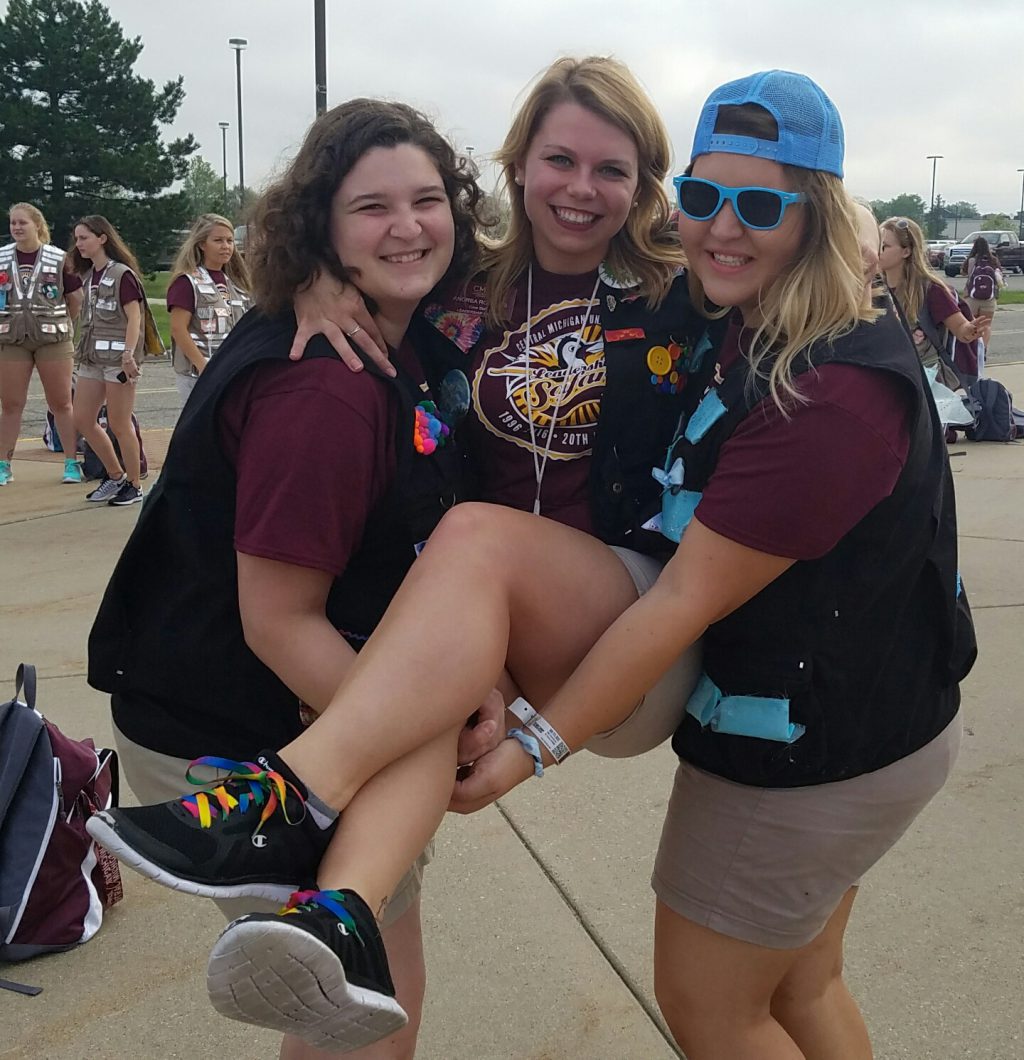 As an incoming freshman, Leadership Safari is the opening conference that lets students experience Central Michigan University in a different perspective. To senior Andrea Roberts, that perspective became a huge part of her life. From being a participant her freshman year to being a staff assistant for the program her fifth year, the program has been a great part of her college career.

As a secondary education major with an English concentration with minors in speech and leadership, Roberts knew she was going to do safari.

“In high school, I was involved in student leadership and it made sense,” Roberts said. “I always loved finding out more about myself and finding ways to help improve the world.”

With such an extensive history with Safari, we asked Roberts questions about her experience.

Grand Central: How was your first time going through the training process?

Andrea Roberts: Overwhelming. I participated a lot in the first few trainings but then I didn’t want to seem like I was overpowering anyone, so I took a step back. But then I ended up being cut from the process completely. I applied to be a guide and was cut. Afterwards I went to the office to find out what I could have done better. They said you had to participate more in the last few trainings but if there was a spot [open] in C-team and or Runner, if I would like it. I said yes. So that’s how I found my spot in C-Team. Had I had been myself, I may not have been cut, but I was trying to be a different person so I think that’s where that happened. But as they say, “Things work out for a good reason” so I fell into a position that I really loved.

GC: Did you think you would have this much connection with C-Team when you first received the position?

AR: At first I didn’t think so. My second year I wanted to be a guide, but I did the Disney College program in 2014 so I wasn’t here for spring training. I was told I could be on C-team again, but I couldn’t be in a new position so I couldn’t be evaluated. So I was on C-Team again and I really grew into it that year and grew to love [being a core guide] as it was and I wasn’t even sure I would get it, but when I did, I loved every second of it. I wasn’t going to do it again, but I was so happy to have been a core guide again because it was the best year I had. I felt that our team was so close that it challenged me in new ways, like not going into the attitude of, “I’ve already done this before” but instead bring a new set of eyes into it.

GC: With your five years of experience, if you didn’t have the leadership mindset, what got you to keep coming back?

AR: The connections. You can put this on a t-shirt: My life would not be the same without leadership safari. I have met some of my closest friends and have been pushed to my limits in a good way. It developed me to be a better leader and a person. I could not imagine what my life would be life without it. It made me so excited about Central and the possibility of inspiring more Chippewas to be more fired up about this school. It’s a really awesome experience.

GC: What would be something you would say to students going into their first ever staff training?

AR: I would say know that you can do it. It seems a lot more scary than it is. Everybody there wants you to succeed. Comparing yourself to other people won’t help you with what you’re doing. Just know that you have the skills and if that’s something you’re still working on, then, we’re giving you the skills to improve those skills and whatever that means to you. Just being there, and being yourself. The biggest misconception about Safari is that you have to be this big, bubbly, extrovert to be on staff and it cannot be further from the truth. That’s the magical thing about our staff is that it’s composed of people from all across the board. I think that’s a very valuable thing we bring to the table. So I encourage those who feel that they might not be completely extroverted or whatever it might be, just be comfortable in their own skin and that they’ll bring something important to the table.

GC: What is the biggest difference between being on staff and being a staff assistant?

AR: I, along with another undergraduate staff assistant, Rachel Schumaker, are in charge of coordinating the speakers and excursions and trainings and all these different things. The biggest thing is really taking a step back. We’ve trained the core guides so, at trainings everyone is doing their thing, and of course we’re there to answer questions and for things to run smoothly but it’s a lot more of seeing it happening instead of having a direct role in it. Of course, it will change when safari gets into the full swing of things, but there are just so many things that go into leadership safari that I had no idea that we had to think about. I assumed that because [the program] is so big that campus would be like, “Oh yeah just have it.” But we actually have to reserve rooms, book chairs, and all these little things that you wouldn’t really think about are part of Safari. So that’s the big change. Plus I get to pick core guide jackets and stuff so that’s cool!

GC: As your last part of being with Safari, what would be your words of wisdom for those going into Safari and for the future?

AR: I’ve personally never saw myself doing this. It was never like, “I’m going to end up working at the [Safari] office one day.” It just so happens that all these different pieces worked out and I think the biggest piece of advice I could say would be, “Trust the process.” Like, if something doesn’t exactly work out, how you expected it to, that’s ok. The biggest point of Safari is being flexible. When life throws things at you, it’s just like Safari how you’ll have to think on your feet really fast, and find a solution. Just have faith that this program does great things and it’s full of people who want to do those great things and that’s what makes [Safari] what it is.