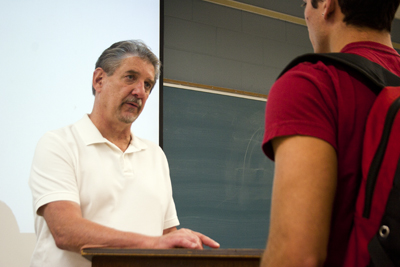 John Bokina’s interest in politics started at a young age when John F. Kennedy ran for president. Later, Bokina had the opportunity to work for Senator Robert F. Kennedy’s presidential campaign until he was assassinated in 1968. Around that time Bokina turned to the study of politics rather than the practice of it.

Bokina was born and raised in Chicago. He comes from a working-class family and went to Catholic primary and secondary schools. Bokina left the city at 21 to get his Ph.D. at the University of Illinois in Urbana-Champaign.

Bokina’s specialty is political theory. He is also interested in looking at how art and pop culture influence political ideas. Bokina’s first book is titled “Marcuse: From the New Left to the Next Left.” His second book, “Opera and Politics,” was published in 1994. He is currently working on a third book.

“It’s about the ancient rebel Spartacus, and how he has been portrayed throughout history in literature and art,” Bokina said.

He plans to finish it within a few months.

“The best part of writing is finishing,” Bokina said.

Bokina finds writing books challenging and gratifying. In the end, he is proud to have something to show for his hard work and research. He also enjoys engaging students in political theory and American politics.

“Teaching is my calling,” Bokina said.

What Bokina thought would be a short job turned into 28 years at UTPA.

“It’s an interesting area, 87 percent of the students are Mexican-American,” Bokina said.

He spent time getting to know his students and got along with them very well. Bokina found that even though there was an obvious cultural difference, there were also many commonalities between the students and him, such as being raised in Catholic and working-class families.

Bokina did not feel culture shocked, but did feel like he was “doing a good thing for the students, to get them out of poverty and into better opportunities”.

Even though he loved teaching at UTPA, Bokina never got used to the hot climate in Texas. He missed the seasons of the Midwest and his hometown of Chicago.

Coincidently, his wife was hired as the dean of the College of Communication and Fine Arts at Central, and Bokina was offered a two-year teaching contract as well.

He likes Central’s up-to-date classrooms and buildings, especially the library, where he can do research.

When Bokina has free time he enjoys spending time with his family at their cottage in northern Michigan. There they go hiking and water skiing. He has a daughter who graduated from Ferris State University, and is currently working in Grand Rapids.

“I’m happy to be close to my hometown again, to my daughter and to be teaching at CMU,” Bokina said.