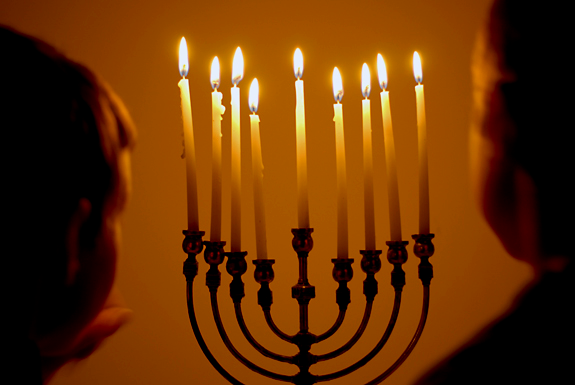 As Christmas trees go up, lights are strung on houses, and street lamps and carolers prepare their favorite songs, few stop to think about the other holidays that take place during this time of year.

Grand Central sat down with Ann Arbor senior Josh Stutesman, president of the Jewish organization, Hillel, at Central Michigan University, to learn more about one of them: Hanukkah.

Grand Central: What is Hanukkah about?

Josh Stutesman: It celebrates the fact that there was enough oil in the temple that was destroyed during a battle. There was enough to be used for eight days and eight nights – that’s where the time frame for this holiday comes from. That was the time needed to rebuild the temple, so it’s a celebration of that event.

GC: What does Hanukkah mean today? Why is it important?

JS: It’s important because it gives people a chance to be thankful and to come together as a family to celebrate those eight nights together. It’s not one of the more major days in Judaism, to be honest. When it comes to actual practiced holidays, compared to media-portrayed holidays, Hanukkah isn’t one of the bigger holidays we have.

GC: What are the bigger holidays?

JS: Rosh Hashanah is a big holiday, which is the New Year. Yom Kippur is the other, which is more about asking for forgiveness. This is the one time of year you ask for forgiveness in a more direct sense.

GC: How do you celebrate these holidays?

JS: There’s a service that goes along with each one. You go through the Torah, which is more or less equivalent of the Bible. You look at the old text of that time period and relate it to modern tenses. Then there’s a lot of songs that are sung and the sermon follows.

GC: How does your family celebrate Hanukkah?

JS: I’m from Ann Arbor, which has a larger Jewish population than Mount Pleasant, so we would always go to our temple. They’d have a latkes dinner, which are potato pancakes. We’d have a big dinner with the congregation and the different families in the temple, and afterward we would go the service, where we would do kind of the same thing as the Rosh Hashanah and Yom Kippur services. We go over the Hanukkah story and relate it somehow in the sermon.

GC: How do you celebrate in Mount Pleasant?

JS: We won’t do anything formal because there’s not a ton of places (in Mount Pleasant) we can go for services. We’ll just have one big Hanukkah party where we do something really chill; have a dreidel tournaments, make menorahs – stuff like that. In the past, we’ve also hosted nights at my apartment where we would light the menorah.