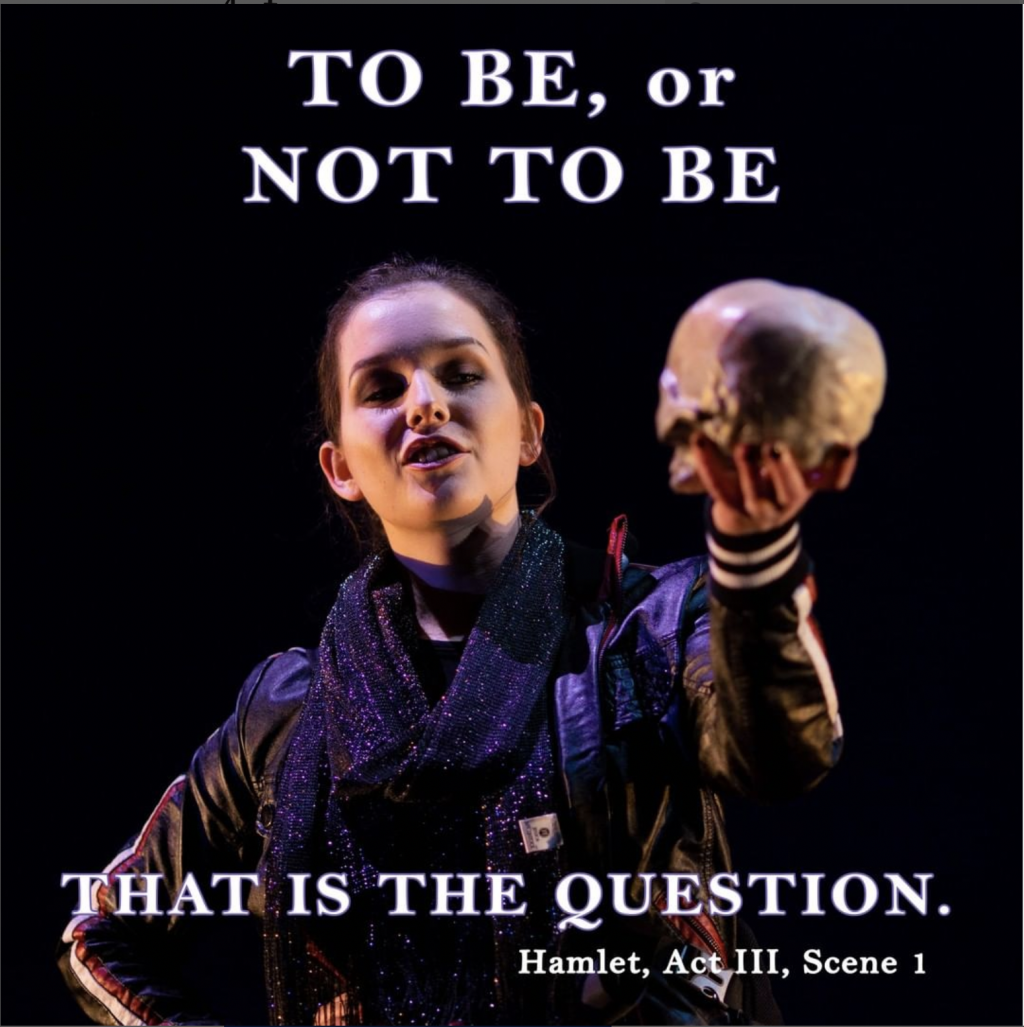 Come see this modern take of ‘Hamlet’ set in an undeclared, but more recent time period. The actors assume that the setting must be around early 2000’s as the show contains smartphones, headphones and music by Doja Cat.

“With TikTok making so many old fashion trends come back I feel like it’s so modern,” said Sarah Brannigan, a senior music theatre major who plays Hamlet four. “Because everyone has a little bit of everything and it’s something that you’d look at today and be like, ‘That’s still kind of cute though.’”

The obvious big difference in this modern production is the use of four Hamlets. The character is divided into different stages, being played by Sam Nowak, Lindsay Fleck, Levale Walker and Sarah Brannigan.

As the play progresses, Hamlet becomes crazier. Hamlet two struggles to find a way to get revenge, while Hamlet three becomes unhinged and breaks off his relationships with everyone. After a quick time jump, Hamlet four returns from England calmer, but with a plan to complete his task.

“I think it has a lot to do with the stages of grief, of coping,” Brannigan said. “But it’s also seeing him overcome all of that.”

“The four Hamlet’s just help to divide more clearly and allows the actors to work more deeply into each phase of the grieving process and the rage process,” said Valentina Avila, a senior acting/directing major who plays Ophelia.

There are changes to other main characters as well. Ophelia, Hamlet’s love interest, is a much more modern teen than in the original play. She’s an artist who loves Hamlet, despite knowing her family doesn’t want her to be with him.

“[Polonius] is worried at the beginning because he thinks Hamlet doesn’t have really great intentions for his relationship with Ophelia,” said Patrick Kemmerling, a junior acting/directing major who plays Lord Polonius. “I think he’s worried about how that would reflect on him as a father, you know, his daughter’s just the prince’s side piece.”

Ophelia later struggles with confusion and heartbreak as Hamlet becomes more abusive and she disregards it, believing he is simply depressed and grieving. When Hamlet murders her father, she battles the guilt of feeling that it was her fault for bringing him into their lives.

“The first time I read the script…my fear was that Ophelia might be very submissive, which I’m not that kind of person,” Avila said. “But after talks with the director and everything, this Ophelia is not submissive. We are reliant on the fact that she’s a teenager, so she’s just living her life at the beginning of the play.”

This production also adds in different cultural influences, such as Latinx, African Vodun, and Vudu.

“The big theme was decolonizing Shakespeare and I think [the director] has done a fantastic job at doing that,” said Lindsay Fleck, a sophomore acting/directing major who plays Hamlet two. “It’s been a lot of fun to step out of that usual English literary viewpoint of Shakespeare.”

“Learning about different ghost stories from other cultures is really cool because who doesn’t love a good ghost story?” Kemmerling said.

This production still stays true to the original play though, with the same traditional language and “long-winded” speeches. Some characters, such as Polonius, remain similar to the original.

“He’s very concerned with appearance and his standing,” Kemmerling said.

“He’s a father who really does care about his kids, but also, his devotion to his king ends with his entire family dying. So maybe a little short-sighted. He’s also very long-winded.”

This play is for anyone who enjoys a good story, but with the famous writing of Shakespeare.

“I love watching Shakespeare when it’s done right,” Brannigan said. “And I feel like this is a production that was done right.”

While they acknowledge that Shakespeare may not be the most exciting play for some viewers, the actors still encourage everyone to come.

“Shakespeare is important to witness just because it has stayed around for 400 years, which is pretty incredible,” Fleck said. “The only other old books per se that you see where people are like, ‘oh yeah, I’ve heard of this book,’ is maybe the Bible and the Iliad.”

The actors also stressed the importance of seeing live theatre performance, because it is something truly unique.

“The version of the show that you see when you go see it live will never be done again and never has been done,” Kemmerling said. “It’s also never a bad idea to support the arts.”