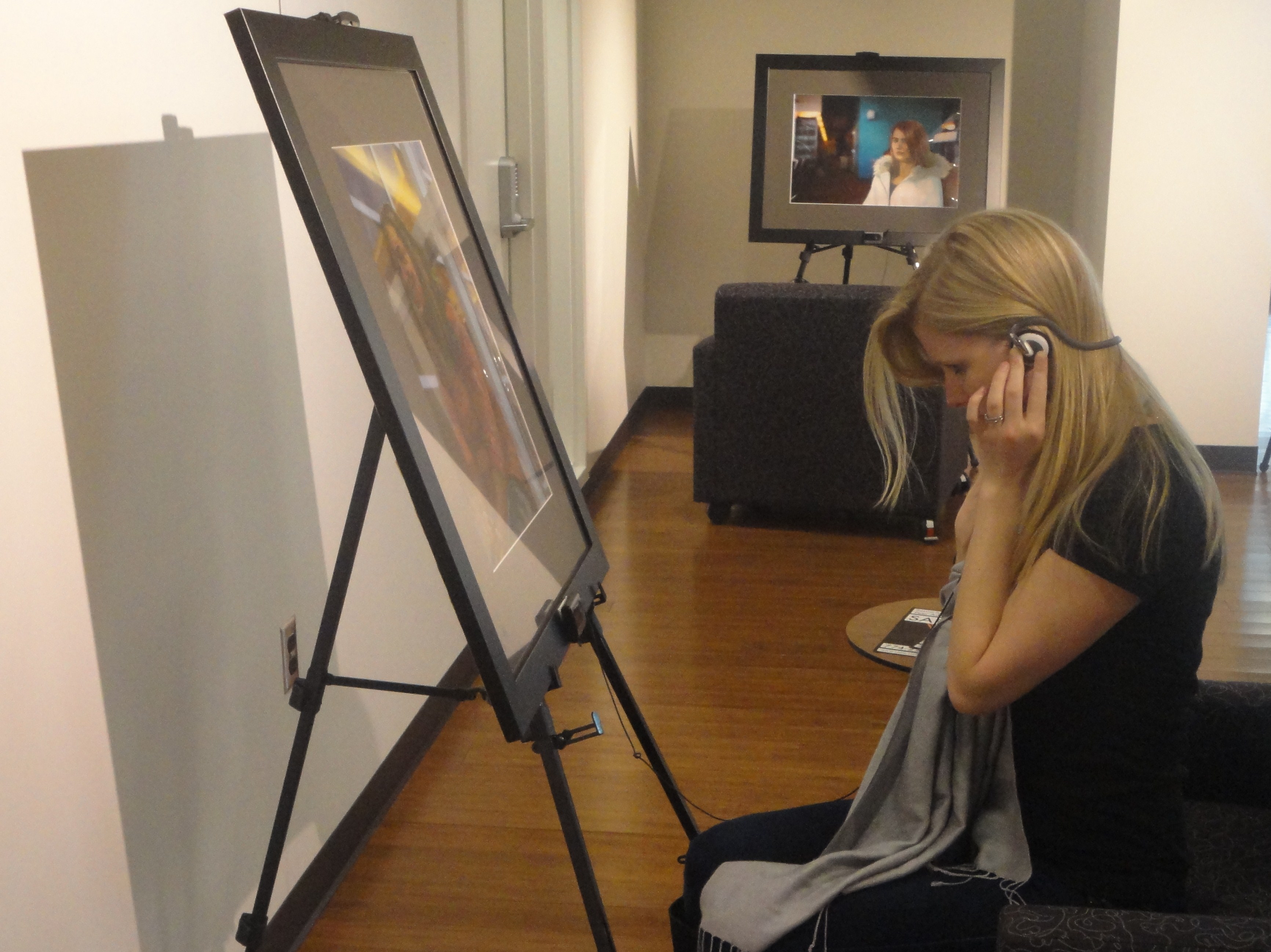 “I felt disgusted and diseased,” another victim described. “A million showers would not have been enough to get that feeling off.”

Nine survivors of sexual aggression share their emotional stories on the campus of Central Michigan University in a unique way.  Spoken is an art exhibit displaying portraits of people who were all victims of sexual assault.  The exhibit is interactive, and along with the artwork are mp3 players that hold the voice of the survivor in the portrait.  As people look at the portraits, they get the chance to hear each person’s different story on how sexual assault forever changed their life.

These sad stories are shared by both men and women who have experienced the pain of sexual assault and have spent a majority of their time dealing with the consequences of one person’s actions against them. In her story, one victim described how deeply her attacker left her damaged physically, emotionally and mentally.

“The choices he made had power over my life,” she said.  “He took my spirit, and my self-confidence and my feeling of safety.”

Some of the survivors tell how they were assaulted by family members.  Others were raped by people they described as close friends.  One man shared how he was taken advantage of by his babysitter when he was only four years old.  While some of the stories vividly describe images of the victim’s rape scene, others explained how they had a difficult time sharing what happened with anyone they knew because they felt too ashamed.  One survivor from the exhibit shared her experience with the judicial system and the challenges she faces telling the details of her assault openly in front of the court.  A different woman admitted that the thought of taking her attacker to court was not something she could have dealt with.  No matter what experience the sexual aggression survivors shared their stories, they all discussed how their attackers made them feel used, worthless and somewhat to blame for what happened to them.

“Never once did I feel like I was the survivor and he was the perpetrator,” a survivor said.  “I always felt like I did something wrong.”

The portraits in the Spoken art exhibit keep the identity of the survivors hidden with a vague painting of their faces.  Each portrait is set to the background of a different location on CMU’s campus, because each of the survivors featured in the portraits are connected to the campus in some way, many of them as former students.

The exhibit was set up at the Office of Diversity Education in the Bovee University Center throughout the month of April as a part of sexual assault awareness month.  Next to the portraits, chairs were set up for people to sit down and listen to the audio stories from the survivors.  Pamphlets full of statistics and information about sexual assault were also laid out all over tables nearby for people to look at take home to remember the exhibit.

“It almost made me feel as if I was the one in the picture,” Smiley said after she listed to one victim’s story who described being assaulted by her own father.  “I felt really, really bad for her, but it’s good she is strong enough to talk about it.  It was really touching.”

The artist of Spoken, Kevin Butler, created the exhibit for the Sexual Aggression Peer Advocates group at CMU.  Spoken is just one of the ways SAPA is reaching out to educate the CMU community on the topic of sexual aggression.  Throughout the month of April, the group has put up visual displays in residence halls, the Student Activity Center and other locations on campus to share statistics and disprove common myths as a part of sexual assault awareness month. However, the work SAPA does goes far beyond spreading awareness for one month.

Sexual Aggression Peer Advocates is a group made up of student volunteers who work year -round to help counsel and advocate for people who survive experiences of sexual aggression.  All throughout the fall and spring semesters, SAPA operates a crisis hotline that is available 24 hours a day, seven days a week as well as an online service called SAPA Chat, where trained peer advocates are available to talk to victims of sexual aggression.

SAPA was founded in 1997 by Steve Thompson, who works as a physical education professor at CMU.  Thompson says he thought of the idea for SAPA while he was working on campus because he knew there were a lot of sexual aggression survivors.  He decided to create the SAPA program because he wanted to give them the opportunity to talk to peers who could help them through their experiences.

Over the last 15 years, SAPA has grown immensely and become a model program that other universities are now working to emulate.  Thompson says CMU was the first university to give student advocates the confidentiality to be able to help mentor their peers through these though experiences.

“Our number one focus is for what is in the best interest of survivors,” Thompson said.  “Our cornerstone is confidentiality.”

SAPA has about 50 students who volunteer as advocates for the program.  Each volunteer is first required to go through a competitive selection process.  If they are chosen to become a peer advocate, each volunteer must then completely about 60 hours of training each year.

Mariah Lenander is a CMU student and sexual aggression peer advocate who has dedicated the last year to becoming educated on many aspects of sexual assault.  According to Lenander, the training helps the volunteers prepare for situations they may deal with as a peer advocate.

“The trainings are a hard and emotional process, but knowing that you can then use it to help someone in their time of need, that’s what moves me,” she said.

Extensive trainings are just the beginning of the hours that SAPA volunteers dedicate to the program.  Each volunteer is required to attend weekly meetings and give up many weekends throughout the semester in order to be on call to talk to people on the crisis lines.

What sets SAPA apart is the student volunteers who can easily relate to the sexual assault survivors.

“We are their peers who are the same age as them, so sometimes it’s easier for them to talk to us,” Lenander said.

In addition to counseling sexual assault survivors, SAPA volunteers work throughout the year to provide educational programs to classes and student groups all over campus.   Thompson says around 60 to 70 programs are presented each school year on topics ranging from partner violence to stalking.  According to Thompson, SAPA is needed at CMU just by looking at some of the statistics of sexual assault.

“About 20 to 26 sexual assaults occur each week on a campus the size of CMU’s. SAPA gets about 200 to 300 people who contact us for our help in a given year,” he said.

Now even the military has recognized Thompson’s program and taken an interest into the unique services SAPA provides.  A group of SAPA volunteers will spend this summer traveling to military bases across the country and even as far as Guantanamo Bay and Japan to present its educational program titled “No Zebras, No Excuses.”

“No Zebras” is one of SAPA’s most well-known programs that uses theatrical performances to encourage audiences to help prevent sexual assault by being aware of their surroundings and not just be another bystander.

SAPA has even given some survivors the opportunity to take their tragic experience and use it to share with others in hope of preventing more sexual assaults in the future.  In the Spoken exhibit, one rape survivor shares in her story how after receiving some counseling, she began to get involved in SAPA while she was a student at CMU.  She was then even led to go back to her high school to share her story and use her life as an example that sexual assault can happen to anyone no matter where they are from.

For more information on SAPA visit www.sapa.cmich.edu or contact 774-2255.