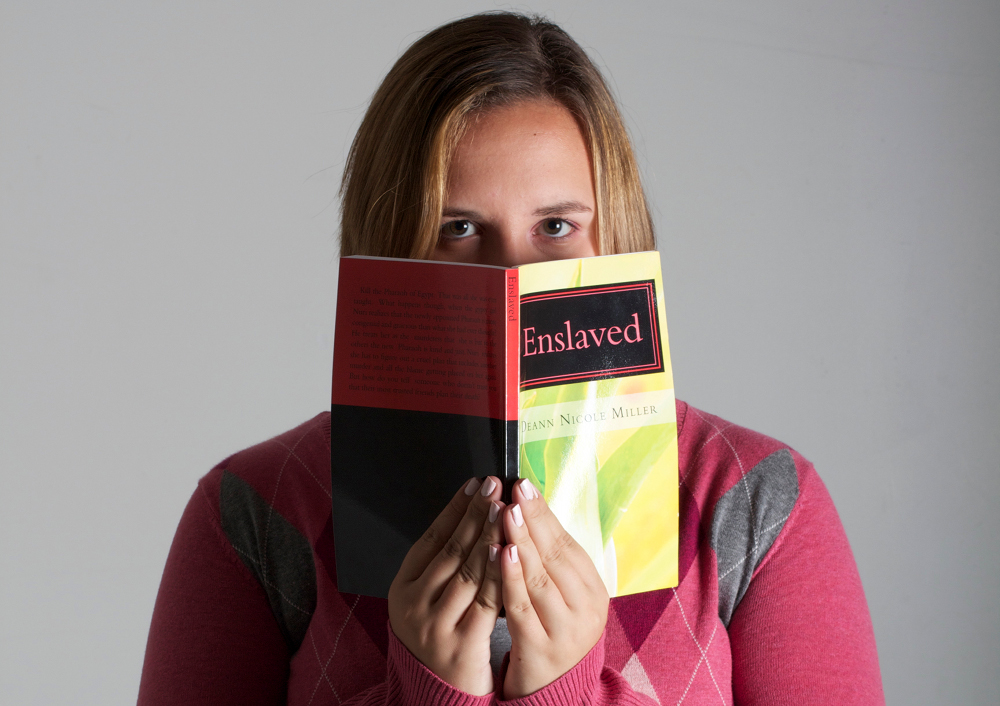 A novel is loosely defined as a work of literary prose that is composed of 40,000 words or more. Of course 40,000 words is only the bare minimum, with most authors writing far beyond that amount. Only two in every 100 novels started ever get finished, and an even smaller percentage of those finished ever get published.

The process of writing a novel equates to countless hours of writing and editing, accompanied by caffeine headaches, a lack of sleep and the sudden death of any social life. Understandably, only the most masochistic of storytellers ever attempt to write one.

Deann Nicole Miller, a Central Michigan University sophomore from Petersburg, Mich., is one of the foremost masochistic storytellers on campus. Her novel Enslaved has been published and is on sale, with another novel on the way. Her passion for writing began at an early age with an enthusiastic fourth grade teacher and a dedicated father encouraging and inspiring her throughout her life.

“Writing allows me to escape,” said Miller. “I’m able to lose myself in some grand adventure.”

Enslaved, Miller’s first novel, is a grand adventure to get lost in. The plot consists of a murder conspiracy set in ancient Egypt. The story follows the gypsy protagonist Nuri, a trained assassin who starts her deadly quest to murder the pharaoh, only to find that not everything is how it seems.

“A major theme in Enslaved is appearance vs. reality; you have to get all the facts and not just judge people on what you see,” Miller said. “Nuri was taught her entire life how terrible the pharaoh was, but as her journey progresses she learns that she’s judged everything wrong.”

The real strength of Enslaved is its characters. Miller has the gift of creating complex characters — characters that have a variety of conflicting motives and emotions — creating a fascinating depth to explore in all of them. It is of no surprise, therefore, that while Miller describes Enslaved as an exciting book full of twists, she insists that the book isn’t driven by the plot but by the characters.

“All my characters surprise me,” Miller said. “It’s like they’re alive; that would be the first thing I would put down for them. “

While the characters in her book are all products of Millers imagination, they are not without precedent from the real world. Miller describes her characters as being inspired by dreams — and also by strangers.

“I people-watch. I often watch people throughout the day and take their quirks and attributes and add them to my character,” Miller said. “If you’re reading a character and it reminds you of yourself, I was probably spying on you.”

Like almost all novels, Enslaved was a work of determination and perseverance. Miller’s days were often used for studying and going to classes while she spent the nights writing the book, all the while her roommates either lounged or slept.

“It took me a year to write Enslaved. I started in my senior year of high school actually, but I hit a wall,” Miller said. “It took until NaNoRriMo the next year to get started again.”

NaNoWriMo, which stands for “National Novel Writing Month,” is a competition held in November that challenges its participants to write a novel in a month — the contest’s website defines a novel as 50,000 words or more. It is free to participate in and open to anyone mad enough to attempt it.

“The majority of my novel was written last November,” Miller said. “NaNoWriMo really challenged me to write and become creative and I’m really looking forward to attempting it again this year.”

Writing is not Miller’s only hobby. She is currently pursuing karate and is a member of the Speech-Language Hearing Club. She is also studying to be a speech pathologist. Authors generally don’t earn enough to support a living by writing alone, but Miller is hopeful for the future.

“Writing will most likely only be a hobby throughout my life, but the plan is to eventually make a million dollars like J.K. Rowling,” Miller said. “Then I’ll be able to quit my job and just write. That is the dream.”

Enslaved is available for sale on Amazon.com, or you can contact Deann Nicole Miller directly for a discounted signed copy at mille1dn@cmich.edu