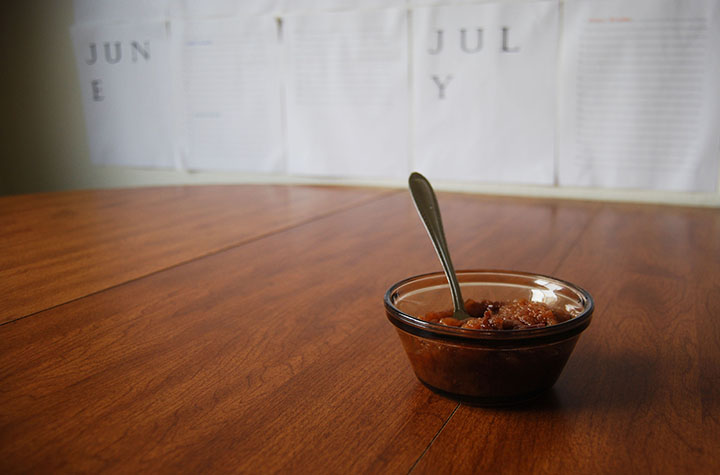 Why buy applesauce from the store when you could make it yourself with this super easy crock-pot recipe? You’ll notice a wonderful autumn-like scent invading your kitchen as the apples cook down. This applesauce can be served warm, topped with cinnamon or it can be refrigerated and eaten cold.

This recipe was adapted on Food Allergies Eats.

There is never a bad time for a cup or bowl of chili. Letting the chili cook longer in a crock-pot will help bring out all the flavors and you’ll get a more noticeably tasty meal than by just combining ingredients on the stove top.

Half to one whole onion, chopped

Fifteen ounce can of tomato sauce

One tablespoon of chili powder

One tablespoon of ground cumin

Half tablespoon of dried oregano

One-eighth of a tablespoon pepper

Sauté ground chuck in a heavy skillet with onions until the meat is brown. Break up the meat into small bits. Drain this well of grease. Mix all the ingredients together in the slow crock-pot.

Cover and cook on low heat for around six hours or until vegetables are tender. Mix cornstarch and water until smooth and turn heat to high. Add this mixture to the crock-pot and stir well. Uncover and cook for 15 minutes or until the chili is slightly thickened.

Top with cheese and sour cream if desired.

This recipe was adapted from About.com.

Create for yourself the traditional and famous southern dish gumbo. For this recipe, it is really up to you how spicy you’d like your dish. Just adjust the seasonings and spices to your taste and preference. Please read all the directions before you begin to cook, as there are many time-consuming steps involved!

Two to two and a half cups of chicken broth

A half bag of large Shrimp

One and a half cup sliced Okra

One jalepeno, chopped with or without seeds

Salt and pepper to taste

One to two tablespoon cumin

One-half to one tablespoon oregano

Make the “roux” by combining flour and oil. At medium-high heat, stir continuously until smooth and cook for about four minutes. Reduce to medium and continue to stir until it’s a dark reddish brown color. This may take up to 15 minutes. Be careful not to let it burn! Set aside and let cool.

Cook sausage and chicken separately and then once fully cooked, set aside to cool down.

Set to cook at low for eight hours or at high for four to five hours, whichever is more convenient. Stir occasionally.

At about half way through, slice the Okra and add the pieces into the crock-pot. Cook the shrimp. Within the last half hour, add to the pot. Stir occasionally.

Once done, ladle and serve over cooked rice. Enjoy with bread and butter.

This recipe was taken from senior Chelsea DeLong.

Here is a recipe that screams fun with its vibrant colors and intense flavors. It also just turns out to be vegan in all the right ways! Avocado makes the world go round.

One large avocado cut into cubes about one inch in size

Combine rice, vegetable stock and onion in the crock-pot and cook on high until the rice is tender for an hour and a half. While the rice cooks, chop the red and green bell peppers and open the diced green chiles. Drain the black beans into a colander and rinse with cold water until there is no more foam.

After the hour and a half, add the chopped bell peppers, diced green chiles with their juice, and the drained black beans into the crock-pot. Combine with the rice and add salt to taste. Cook on high for about 30 more minutes.

While the crock-pot goes on cooking, chop the tomato, cilantro and Poblano pepper. Next thinly slice the green onion and cut the avocado into cubes and toss in a bowl with one tablespoon. of the lime juice. Make sure you use a bowl big enough to hold all the ingredients! Add in the tomato, cilantro, Poblano pepper, green onion and the other two tablespoons of lime juice, two tablespoons olive oil and ground cumin. Again, salt to taste.

This recipe will be ready to eat when the rice is cooked through but the pepper still has a bit of crunch to it. It is best served warm and with this salsa, but other toppings can be added if desired such as sour cream and a Mexican cheese blend.

This recipe was adapted from  Kalyn’s Kitchen.

Stuffing in a Crock-pot

Instead of actually stuffing a turkey this year for Thanksgiving, try making the stuffing in a crock-pot! This recipe can also be further adapted for vegetarians or vegans who want to enjoy some classic stuffing without a turkey dinner.

Two apples of your choice, peeled and chopped

One-half to one onion, chopped

Drizzle with one-fourth cup chicken broth and place the remaining broth in the refrigerator. Cook the combination on low for seven to eight hours, drizzling a few tablespoons of the chicken broth on top every two hours.

This recipe was adapted from About.com.