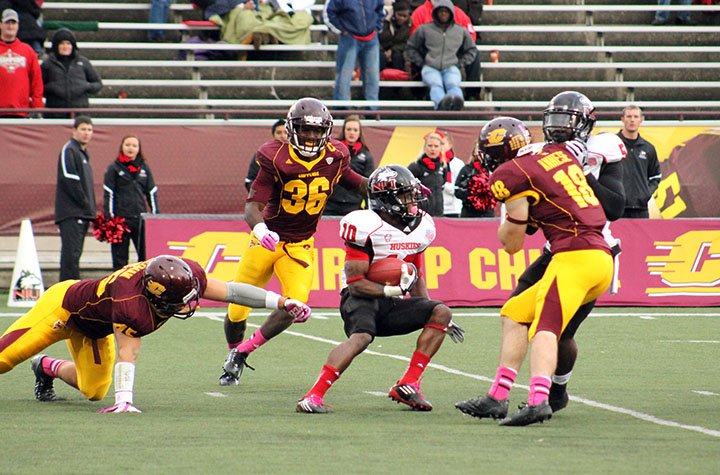 The last time Central Michigan played a game way back on Oct. 18, they lost 38-17 to Northern Illinois, giving up the most rushing yards to a quarterback in Football Subdivision history.

Jordan Lynch ran for 316 yards on 32 carries and three touchdowns, while passing for 155 yards and a touchdown.

This defense has a lot to prove, as it gets another chance against a top-tier quarterback.

On Wednesday, Central Michigan travels to Muncie, Ind. to take on Ball State (8-1, 5-0) and senior quarterback Keith Wenning. While Wenning doesn’t present the rushing threat that Lynch did, he knows how to put the ball in the end zone.

Through nine games, Wenning has thrown 23 touchdown passes to only five interceptions and is closing in on 3,000 yards passing. He leads a Ball State offense that has the 18th best scoring offense in the nation at 39.4 points per game.

Wenning is in the top 1o in the nation when it comes to passing yards (2,865) and touchdowns. With that, the pressure now shifts from the shoulders of Cooper Rush and onto the defense, specifically the secondary.

Central’s secondary will be tasked with trying to shutdown the explosive receiving duo of Willie Snead and Jordan Williams. Snead has 65 catches for 1,057 yards and 10 touchdowns, while Williams has seven touchdowns with 56 catches for 792 yards.

To put those numbers into perspective, Titus Davis has five touchdowns on 34 catches with 627 yards—as Central Michigan’s leader in all three categories.

If only it were as simple as just stopping the pass for Central Michigan’s defense.

The defense is going to have to play a near perfect game to give the offense a fighting chance in this one, and it all starts with the defensive line. To have any chance at slowing the Ball State offense down, an opposing defense must stop the run and pressure the quarterback. Wenning is not fleet-footed but he doesn’t make mistakes when he gets to sit back in the pocket and pick you apart.

When the Cardinals can set up their running game it is almost all but over for the opposing team. Usually, you don’t want to dwell on the past, but in this case it is the best strategy for Central Michigan. The two top guys that beat them last year are still the focal point of this Ball State offense.

As for the Central Michigan offense, it comes down to the basics yet again. Rush must protect the football and not be afraid to utilize his home-run threat in Davis. If it comes down to a shootout, Rush will have to play his best game of his career to keep up with this explosive offense.

Central Michigan has to win its last four games to be eligible for a bowl berth—this is the last game against a team which has a winning record. It’s a very crucial game for this team and coach Dan Enos’ future.

The only question left is which team will show up?