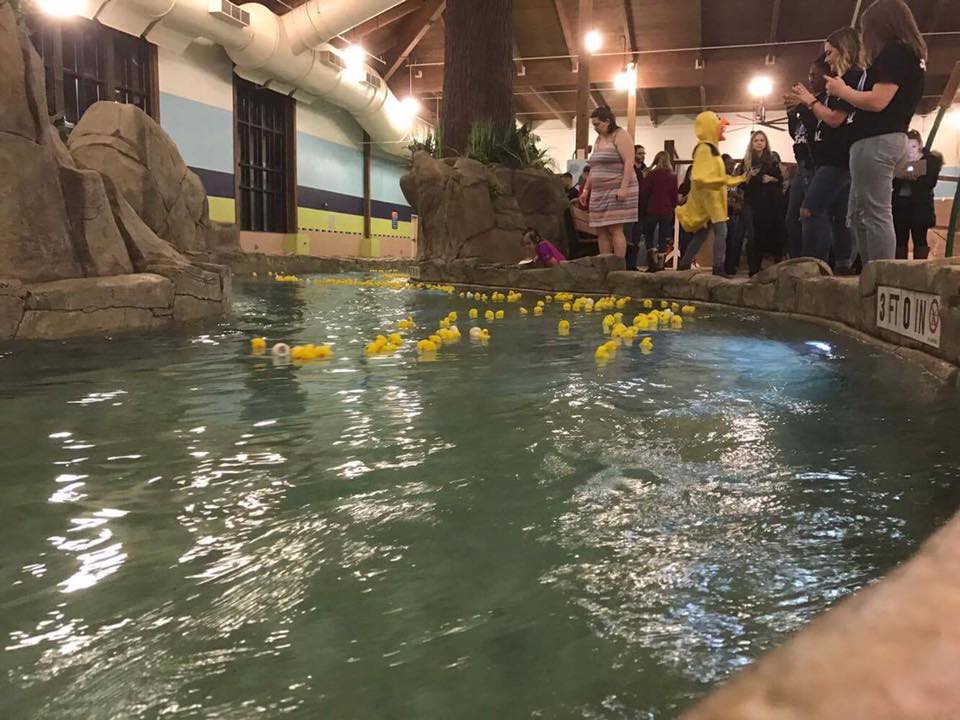 The smell of chlorine, the splashing of water down a waterslide and the squeaking of rubber ducks is here for PR Central’s 10 Annual Rubber Duck Derby.

This fundraiser, which began in January 2013, will raise money for scholarships and to send members to national PRSSA conferences, said Sophia Wittbrodt, the Duck Derby coordinator.

The event began with a meeting in 2012, in which the group was attempting to find a simple and unique fundraiser, said Molly Nyenhuis, the former president of PR Central from 2012.

“We weren’t looking for a one and done but rather something we could pass on to the next group,” Nyenhuis said.

As ideas of pancake breakfasts and t-shirt sales got tossed around, one member mentioned that her hometown had recently hosted a duck derby. The group agreed it sounded fun.

Due to it being a spring fundraiser, the group needed some place indoors to hold the race. That is when the eboard talked to Soaring Eagle Waterpark, which agreed to host the event. With some rubber ducks provided from the waterpark and others bought by PR Central, it was all set.

“PR Central actually nearly shut down in spring 2012 due to lack of leadership,” Nyenhuis said. “To see how far it’s come since then makes me really proud and every year the Derby comes around I love to see how the next group makes it their own.”

The ducks sell for $2, either through the organization’s linktree on Instagram or on their website. Payment can be made through Venmo or given to a PR Central member.

The first-place prize is a $200 cash payment. The second-place prize is a two-night stay at Soaring Eagle Waterpark. Wittbrodt did not want to fully disclose the third-place prize before the event, but it will be a basket containing goodies, gift cards and more.

The race will be livestreamed on Facebook on March 22 at 9:30 p.m. As of Saturday morning, there were almost 1,000 ducks purchased.