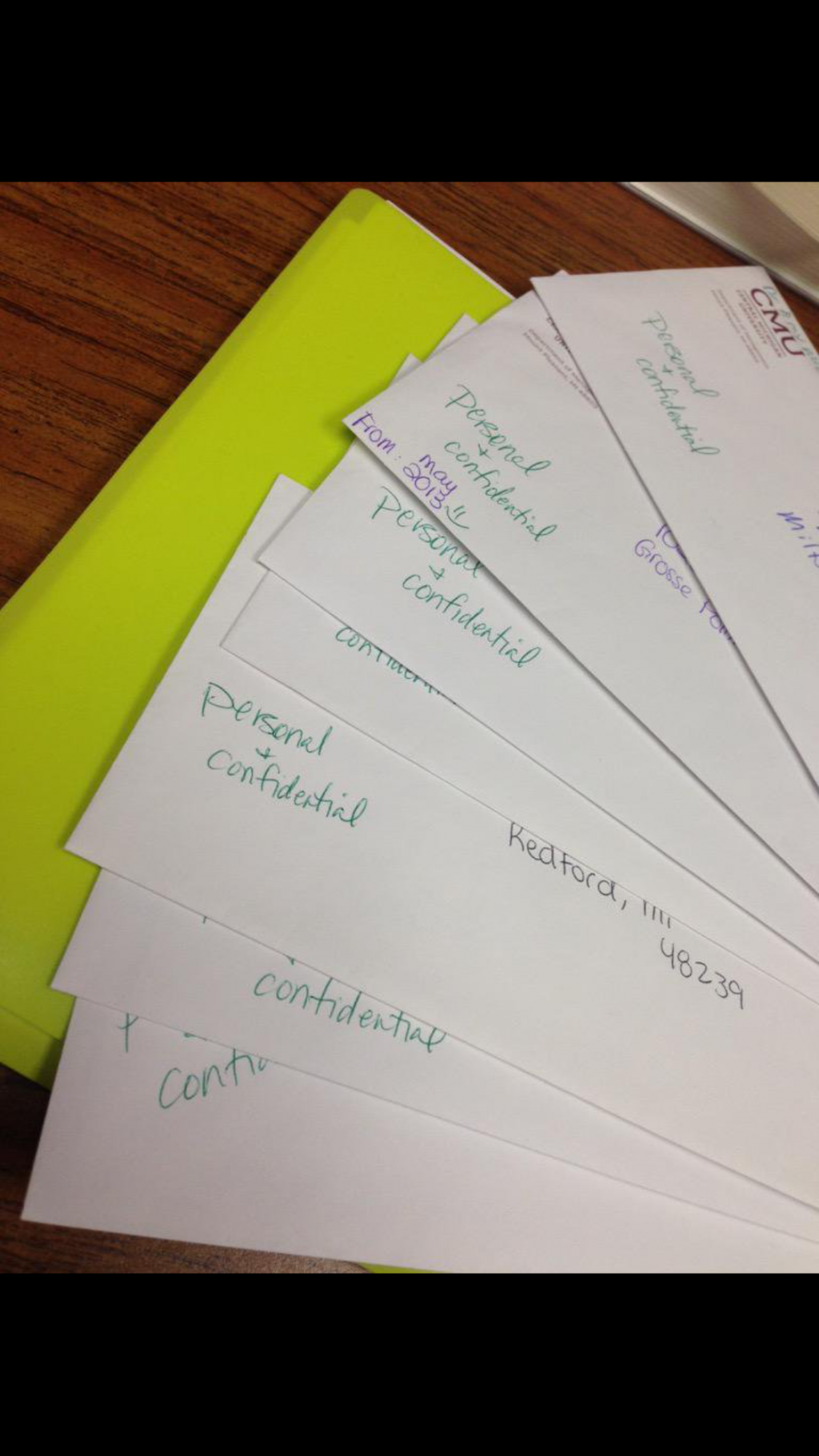 Five years ago, Kevin Henry wrote a letter to himself in a classroom on Central Michigan University’s campus. The letter stated, “Dear Kevin, Congratulations on completing law school.” He received that letter in the mail recently and couldn’t believe how timely it was.

Henry, a Central Michigan University alumni, tweeted on April 26 about how he had received the letter on his last day of law school. 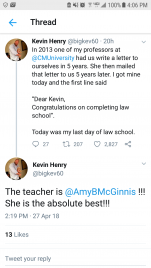 Amy McGinnis, a professor at CMU, assigns her students in her MGT 335 class to write letters to their future selves and makes sure her past students, like Henry, receive the letters later in life.

“I started having students write the letter to themselves pretty quickly into my teaching,” McGinnis said. “I wanted students to remember what we talked about and to help them use it in their future roles. The sky is the limit as to what they write about – I give them prompts like, “As a manager and leader of the future, I want to….”, but students can start their letter any way they want and can write about anything they want. I ask them, where do you want to be in 1, 2, 3, 5 years? Think about what you want to be doing and how you want to take what you’ve learned with you. What will you remember and apply?”

After graduating from CMU in 2013, Henry went to Northern Illinois University College of Law to be closer to family since he is originally from Morris, Illinois. He just recently finished up his time at law school and will be a practicing attorney in the Chicago area.

Henry said he had completely forgotten he had written this letter to himself.

“When I opened the letter and saw what it said, it honestly gave me the chills,” Henry said. “It came to my house the very last day of classes for me in law school. The timing was amazing. I always knew I wanted to be an attorney and this is just proof that if you set your mind to something, it can be achieved. I wouldn’t be here if it weren’t for such great people like Dr. McGinnis in my life.”

McGinnis says the goal of the letter project is to have her students apply what they had learned. She said she had done a similar thing for herself as part of the Rollie Denison Leadership Institute. McGinnis said the letter she had written to herself had been similar to Henry’s, complimenting herself on her new position. When she had received the letter six months later, she said it had such an impact on her that she decided later in life that it would also benefit her students.

Henry’s letter to his future self was written for five years, yet not all are. McGinnis said she asks her students to post-date it at least six months forward, but it can be as far in the future as they want.

“Most letters end up being about a year out, but I have letters that are dated 2025 and beyond,” McGinnis said. “Students will decide for themselves when they want it to go out – they know what goals they have for themselves and what important milestones they will look forward to.”

McGinnis said she has the students put their names on the envelopes and provide a mailing address if they know that there is one that is somewhat permanent, if not then she has them address it to family or put their emails on the back of the envelope. She said it is pretty easy to connect with students to make sure they get their letters.

Henry said it took a while for his letter to reach him, since his family has since moved from Morris, Illinois to Georgia, but his old neighbor got it to him. He said when he saw the letter he was confused, but realized what it was once he saw the contents of the envelope.

Henry said it was reassuring to see his predictions that he made five years ago are his reality now.

“I’ve worked hard to put myself in the position I am in currently and that all wouldn’t be possible if I hadn’t had the experiences I did have while at CMU,” Henry said. “I knew I had always wanted to be a lawyer and I set that goal for myself early. When I read the letter and the first line stated “Congratulations on completing law school,” on the exact day I finished law school, I was a little overwhelmed at how the timing all came together.”

McGinnis said she thought that it was amazing that the letter Henry wrote himself had been so accurate.

“The timing was spot on,” McGinnis said. “I think I knew he wanted to go to law school, but I don’t ever know what the contents of the letters are, so when he messaged me about it I was shocked and excited that this was how he had framed his letter. Five years is a long time. I felt blessed to be part of his undergraduate experience and so proud that he made his dream come true.”