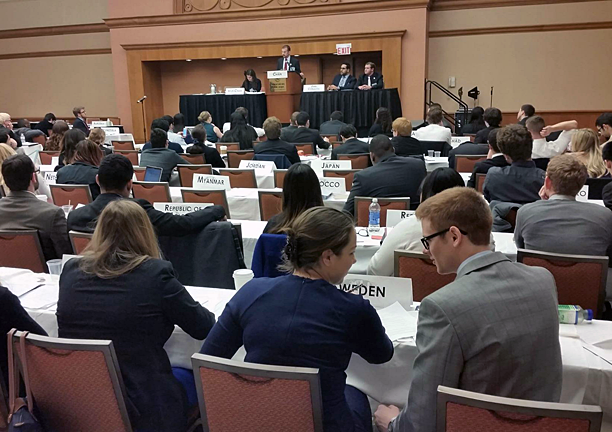 The Model United Nations is a unique experience that Central Michigan University provides, allowing students to immerse themselves in a political simulation where the stakes of diplomacy have global consequences.

“It’s like an academic roleplaying game almost. So your school, your group, is assigned a country, and you represent that country,” Emelander said.

Her class represented Estonia and Latvia, in which Emelander was a part of the Latvian delegation.

“You research their [the country’s] policies and how they stand on issues, especially relating to the United Nations,” Emelander said. “Then you go and represent your nation, like how your nation would act.”

The purpose of the class is to educate students on the procedures of the United Nations and their associations, as well as instilling in them a firm understanding of international diplomacy.

However, rather than ending with a final exam like most classes, the Model UN culminates in a conference where the students will engage in one mock United Nations session with other universities.

“This year we went to a conference in Toronto,”  Dr. Timothy Hazen said, the advisor of the Model UN program. “These conferences are essentially political simulations where the students represent either a specific country or the students represent a specific individual confronting individual issues. There may be one student that’s representing Latvia on a human rights committee or another student that’s looking at nuclear weapons. There are dozens of potential topics.”

Madison had attended the conference during the fall, where it was held in Chicago.

“It was made up of a bunch of universities around the country with a ton of university students acting like they’re actual diplomats from all of their 160 or so countries,”Emelander said. “I was apart of the Plenary Committee, and we were having an issue with Peacekeeper deaths. So, we had to pass a resolution that would in some way help reduce the amount of Peacekeeper deaths.”

The Conference was not all work however, with the students allowed ample time to explore the city.

“We had a free afternoon in Chicago, and during that time there was lots of shopping, and doing tourist things,” Emelander said.

“It’s a great selling point to go to these amazing cities,” Hazen said. “We’ve been to New York City before, though we typically go to Chicago, but there are conferences all over. It’s a really cool opportunity for our students, and all you have to do is take the class. More or less, if you’re in the class, those lab fees kind of help pay for the trip, so there’s really nothing out of pocket.”

All majors are allowed to enroll in the course, with the only requirements being that the student must be a sophomore who has taken around 20 credits beforehand. The fall semester “beginners” course must also be taken as a prerequisite to taking the more advanced spring course.