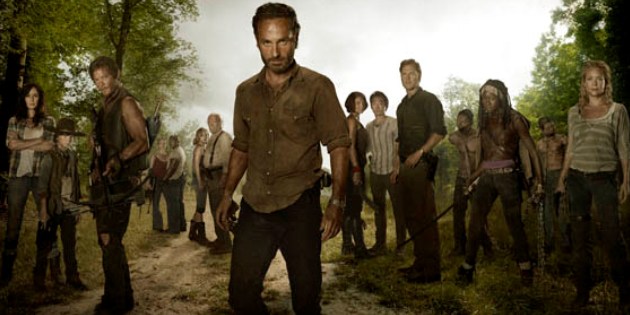 The mid-season finale of “The Walking Dead” aired last week and went out with a bang. The close of the episode left audiences cliffhanging and eager to tune back in February for the remainder of the new episodes.

The first half of season three was definitely a roller coaster of emotions. One of the most memorable episodes of the season and the series as a whole resulted in the death of two of its main characters.

T-Dawg died a heroic death, giving his life to let Carol escape the prison catacombs. But it’s Lori’s graphic sacrifice for her unborn child that gives audiences perhaps the most memorable and heart wrenching scenes. I know I was a mess when she was said good-bye to her son, Carl.

Besides the tear jerking moments, this season has so far showed audiences a different survivor viewpoint and how they are handling this zombie apocalypse. The show introduces the town of Woodbury; founded by a small group of people and similar in action to that of Rick’s group.

On the surface, Woodbury looks to be unaffected by the “walkers.” However, as peaceful and quaint as it seems, the town holds grossly dark secrets. Woodbury is run by The Governor (David Mossiseey).  He chooses to keep his true identity mysterious and he is an evil S.O.B.

The first half of the third season also brought a couple of new characters like: formerly trapped prisoners Michonne and Oscar (Vincent Ward) and Tyreese (Chad Coleman), The Governor and we welcome back Merle.

Viewers might remember Merle as the racist redneck brother of Daryl, left for dead on a rooftop in season one. Apparently, Merle cut off his right hand to free himself from handcuffs and survived waves of zombies and made it to Woodbury.

The anticipation of the two groups clashing came to a head when Rick’s group infiltrated Woodbury to rescue Glen and Maggie from a P.O.W.-like setting.  While on this Hail Mary rescue mission, Michonne ventures into The Governor’s room with the probable intention of assassination.

Instead, she found Penny, The Governor’s undead daughter chained in his closet. After killing Penny, Michonne is in a knock-down-drag-out fight with The Governor resulting in a gruesome eye gouging via glass shard.

After Maggie and Glen’s rescue, there is a giant shoot out leaving Daryl behind to be later captured.

At the end of the episode, The Governor reunited Daryl to Merle and portrayed Merle as a covert traitor who let Rick’s group in.  The fate of both of the brothers is up in the air and audiences are left out to dry until the commencement of the second half of this season.

While it’s difficult to predict what will happen in the February premiere, the previews seem to suggest some form of Woodbury retaliation. Audiences also can’t forget the smaller group of survivors that ventured into the prison.  A change in tide in Andrea’s feelings toward the Governor can also be predicted as she might find out that he had Glen and Maggie as prisoners, and that he knew Rick’s group was alive.

This episode should have satisfied its loyal viewers with the mid-season finale.  If the creators of “The Walking Dead” held out any longer in the clash of these two groups, it would have taken too long, losing the interest of viewers.

However, the fight scene between Michonne and the The Governor was one drawback in this episode.  It would been assumed that the toppled “walker” heads in the fish tanks would have an affect on Michonne and/or The Governor.  Especially, since both of them had cuts, or in the Governors instance, a piece of glass stabbed into his right eye. Their lack of “walker” reaction shows in consistency in the series’ past experiences.

Overall, this first half of seasons three needed to happen.  It had been majorly concentrated on Rick’s group for the better half of two seasons and adding a new group like Woodbury gave the show more depth. It gave another dimension to the apocalypse and showed a difference in another group’s handling.