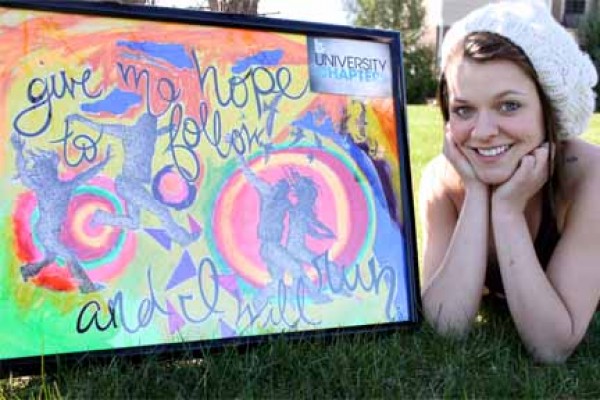 “Start a fight with your life,” urges Chantell LaForest, Escanaba junior and To Write Love on Her Arms (TWLOHA) president, admitting her very personal ties to the organization.

“I was slowly killing myself. When things got bad, that’s when [TWLOHA] came into my life,” LaForest said.

To Write Love on Her Arms is a nonprofit organization dedicated to helping people dealing with depression, suicide, addiction and self-injury.

LaForest, an integrated public relations major, is a survivor of sexual abuse, depression, self-injury and while struggling with many issues in 2009, she attempted to overdose.

“I wasn’t myself, it’s like someone takes you over,” LaForest said. “It saved me when I needed it.”

In the United States, suicide is the eleventh leading cause of death for Americans and is the third leading cause for people aged 15-24, according to TWLOHA’s website.

LaForest also lost two friends to suicide and says that there’s not a day that goes by that she doesn’t think about them.

“It’s been difficult, especially for people close to them,” LaForest said. “There’s a reason they went, I’m glad they’re finally content and happy.”

According to the World Health Organization, more than 90% of all cases of suicide are related to mental health disorders, most commonly depression and substance abuse.

“It’s a fight and battle every day for me and still is,” LaForest said. “My mental health is biological and I’m going to have to live with it for the rest of my life.”

LaForest went on to say that “acceptance is the easiest way to overcome it.”

In Escanaba, Mich., LaForest’s sister, Olivia, is starting to follow in her sister’s footsteps and bring TWLOHA onto her high school campus after learning that a close friend was self-injuring.

“We’re trying to take the world by storm and make everyone love each other,” LaForest said.

For high schools, TWLOHA is implementing ‘The Storytellers’ campaign, which is a fundraising project bringing awareness to young adults. The top fundraising school in each bracket wins the chance to bring a TWLOHA staff speaker, video presentation, music performance and sell TWLOHA merchandise.

Whether it’s self-injury to an attempted suicide, struggling with depression or addiction, or simply knowing anyone dealing with these issues, TWLOHA is available to help.

On the campus of CMU, TWLOHA held “Living your Story” Week from March 26-March 31 which brought many activities and opportunities for students to get involved with the organization.

TWLOHA’s CMU U-Chapter, which has about thirty consistent members, takes the main vision of the organization and applies it to college students on campus, since young adults are the most at risk.

“We’re here and we are doing something, that’s all that matters,” Laforest said.

Living your Story Week was held to celebrate people’s stories, embrace everyone’s individuality and the uniqueness of their lives through many events held on campus.

“I just want people to know that there’s a place they can go and be themselves,” LaForest said. “We want them to be a part of our community. We want to turn what they hate about themselves into what they’re proud of.”

The week started off with Slam Night, a poetry reading at Kaya Coffee House on Monday while Tuesday evening brought a forum event in the Park Library Auditorium which included four women on stage, sharing their stories.

Wednesday brought To Write Love on Her Arms day where the chapter had tables near the pond by the library and the Education and Human Services building. The members would actually write “LOVE” on the arms of willing passersby or talk to people about the organization, which is a great way that many people can participate and spread awareness.

Grand Rapids sophomore and TWLOHA treasurer Morgan Durfee went on to explain: “It was so great that they allowed us to write “LOVE” as large as we could on their arms, while we explained what the cause was. Even if the writing wasn’t perfect, they were just happy to support TWLOHA.”

The Living your Story benefit concert was Thursday evening and was hosted by a group from an RPL 430 class. More than 50 people attended the event at the Broadway Theatre which opened with Ryan Anderson on guitar, followed by performances from Rival Summers, Mark Daisy, and Ben Schuller plus 3.

“Everyone seemed to be having a great time enjoying the music and supporting the cause,” Durfee said. “TWLOHA works hand in hand with music most of the time, so I always love it when we can bring the two together.”

Bringing tears to the eyes of LaForest throughout the evening, the benefit concert went better than she had anticipated and she felt it was a great way to end her term.

Of the more than $600 in proceeds raised from the benefit concert, half the money will go to the national To Write Love organization and the other half will stay with the CMU U-Chapter.

TWLOHA’s Walk/Run at Finch Fieldhouse, which was scheduled for Saturday, March 31 at 11 a.m. to 4 p.m., was cancelled due to a medical emergency of the member in charge of the event.

To Write Love on Her Arms’ weekly meetings, which are open to anyone, are held every Wednesday nights at 7 p.m. in Anspach 156.

“I heard Chantell’s story back in 2010 and it is one of the most empowering stories I’ve heard. Since then, I’ve gotten to know Chantell pretty well and it’s great to see how well she’s doing,” Durfee said. “Without Chantell, TWLOHA at CMU would not be the same.”

Each year just about one million people die from suicide, which means there is around one death every 40 seconds globally. By 2020, it’s predicted that the rate of death from suicide will be one every 20 seconds, according to the World Health Organization.

“I’m really not alone, I’m one of millions,” LaForest said. “I’m a survivor of a lot of different things and some days are going to be a lot worse than others, but your life is so worth the fight.”