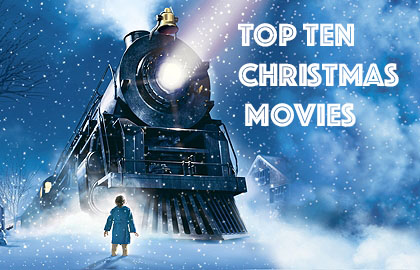 The holiday season is the time of the year that comes with an array of holiday themed movies that range from sentimental and light-hearted to hilarious and silly. Some of the Christmas movies presented for the season may not directly focus on the season, yet they are a favorite for this time of year.

Amongst the various Christmas movies, there are some that rise above the commercialism of the holiday season and make for quality entertainment throughout the wintry months.

So kick back and relax this Christmas with Grand Central’s top 10 Christmas movie list.

Based on the popular children’s book, this movie with life-like animation tells the story of a boy who gets an amazing opportunity to go to the North Pole on a magical train despite his disbelief in Santa Claus.

The movie showcases the talents of Tom Hanks as he takes on most of the characters voices, including prominent characters such as the story narrator and the train conductor.

This movie tackles the complex topic of whether you can really believe in something you can’t see. The film also features songs such as, “Hot Chocolate,” performed by Tom Hanks and the mesmerizing “Believe,” which is performed by Josh Groban.

The Polar Express is a movie filled with adventure that enchants children and adults alike, highlighting the magic of the season.

Tim Burton’s story revolves around doors that lead to lands specific to each major holiday with its people working to prepare for that year’s respective holidays.

In Halloween Town, Jack Skellington, the town’s most-beloved citizen, feels that he has lost his passion for scaring until he stumbles upon the Christmas door, deciding to take over for Santa Claus in his own terrifying way.

This movie features the imaginative production talents of Tim Burton, the unique musical compositions of Danny Elfman, and the directorial mind of Henry Selick. The Nightmare Before Christmas is a movie that is fun to watch from Halloween through Christmas and gives both a darker and imaginative take on the Christmas season.

Based on Dr. Seuss’ beloved children’s book, this movie tells the classic story while raising questions on the backstory of the Grinch, such as ‘What made the Grinch hate Christmas so much?’ and ‘Why does he specifically hate the Whos?’

The story follows a green thing known as the Grinch who despises Christmas as well as the Whos so much that he is willing to steal Christmas from them. In this movie, the leading character is portrayed by Jim Carrey who brings his personal comedic style into the role.

While there are many bizarre and humorous elements to the story, the underlying message is that Christmas is more about spreading love than material possessions.

This movie follows stories of different types of love around the holidays through the eyes of British citizens played by Hugh Grant, Liam Neeson, Colin Firth, Emma Thompson, Alan Rickman, Keira Knightly, Martin Freeman and many other big names in film and television.

While this movie doesn’t directly correlate to holiday festivities, the holiday undertones are still very plain to see.

This movie showcases the craziness of the holiday season when it comes to buying gifts, specifically toys, for family members.

The film follows Howard Langston, played by Arnold Schwarzenegger, who desperately tries to redeem himself as a father in the eyes of his son by getting him the beloved action hero Turbo-Man, the year’s most popular and hardest to find toy.

Along the way, Howard has several run-ins with a psychotic mailman, played by Sinbad, who is in search of the same toy. This film is hilarious and outrageous while also bringing truth to how crazy the holiday season can be.

This movie is the classic and hilarious story about a young boy doing everything he can in order to get the toy he wants most, a Red Rider carbon action B.B. gun, despite the constant warnings from his mom, his teacher and even a mall santa that he promises to “shoot his eye out.”

Along with the hilarity of that continuous gag, other classic jokes include a lamp that looks like leg with fishnet stockings, a commercialized decoder, a few unfortunate swearing incidents and Christmas dinner at a Chinese restaurant.

This movie is so popular that starting at 8 p.m. Christmas Eve, TBS devotes its network to playing the classic over and over for a continuous 24 hours.

This movie also displays the realities of what some children have to deal with such as bullies, silly dares, parent and teacher discipline and the simple joys of childhood. “A Christmas Story” continues to appeal to us for the hidden adult themes and its ability to make viewers remember a simpler time.

This movie is a hilarious comedy that displays everything that can go wrong during the holidays.

Whether it’s putting the lights up only for them to not work at all, the annoying relatives that come to visit, a less-than-stellar Christmas bonus or a burned tree, anything and everything goes wrong for Clark Griswold and his family.

While Clark strives for the perfect family Christmas, bad luck continues to ensue throughout the Christmas season for the Griswolds.

Not only does this movie feature Chevy Chase’s legendary comedic style, it also features the humor of Randy Quaid, Johnny Galecki, Julia Lois-Dreyfus and Beverly D’Angelo.

The movie pairs hilarious gags with the message that Christmas doesn’t have to be perfect as long as it’s with family.

Whether you prefer the original version or its remake, this movie bears one of the most-valued questions ever: “Does Santa Claus exist?”

After the Macy’s Santa Claus is fired for being intoxicated right before the Macy’s Thanksgiving Parade, a kind man who looks the part offers to fill in and later become the New York Macy’s official Santa Claus.

However, this man claims to be the real Santa Claus and while most people disagree with that, others start to believe that perhaps he is the real Santa after all.

This leads to legal disputes along with some meddling within the complex relationship between a hard-hearted Macy’s event director and an optimistic lawyer.

This movie is beautifully written and performed, having adults and children alike believing in the magic of Santa.

This is the creative story of a baby who accidentally gets transported to the North Pole via Santa’s sleigh and is raised to be an elf until he finds out his true human heritage and travels to New York City to meet his biological father.

Will Ferrell uses his outrageous comedic techniques to give life to the spirited Buddy the elf.

Elf is particularly loved by audiences for its quotable dialogue, with lines like “Buddy the Elf, what’s your favorite color?” “I’m a cotton-headed ninny-muggins,” “Son of a Nutcracker!” and “SANTA!!!!! OH MY GOD!!!”

This film spreads the message that any person can have the Christmas spirit and the best way to spread holiday cheer is singing loud for all to hear.

While the plot does not pertain to Christmas, it has become a favorite for many people to watch around the holiday season.

The story takes place in Los Angeles where an off-duty New York City police officer, John McClane, played by Bruce Willis, travels to reconcile with his wife at her office holiday party until the presence of Hans Gruber, played by Alan Rickman, and his criminal crew take over the building and hold everyone hostage.

McClane manages to evade capture and with the help of an LAPD officer, he takes down Hans Gruber’s crew.

This movie is an awesome action movie that displays dark humor and intrigue of Willis’ and Rickman’s characters. If anyone is particularly tired of the fluff that comes from most Christmas movies, they will enjoy this crazy and exciting take within the action genre.